Dynamite has taken the absolutely right approach with the James Bond license, and it’s not a license to kill. It’s a license to let some of comics’ best writers take turns telling stories of 007, and so the next writer told to live and let scribe is the great Greg Pak. Certainly his talents are up there with previous writers Warren Ellis and James Robinson. Of the three books Dynamite announced today, this is the one that has me the most excited.

The series begins as Agent 007 tracks a smuggler into Singapore to secure a dangerous case, contents unknown. But a Korean mystery man wants the case as well, for very different reasons. If Bond and this new rival don’t kill each other, the ruthless terrorist organization known as ORU will be more than happy to finish the job.

“I’m thrilled to have the chance to play with these classic characters, giving them the biggest surprises, the funnest toys, and the wildest plot twists we can come up with — and maybe even a surprisingly moving emotional endgame,” said author Greg Pak. “And I’m hugely excited about this creative team, with Marc Laming giving us that sleek action and character work he does so well! Can’t wait ’til we can show you what we’re cooking up!”

“I couldn’t be more excited to be working on a James Bond book with Greg Pak, Nate Cosby, and Dynamite. I have loved Greg’s work since first reading Planet Hulk and Nate is one of my favourite collaborators in comics, he always brings such enthusiasm and positivity to every project he works on. And it’s BOND!” added artist Marc Laming.

“Greg, Marc, colorist Triona Farrell and letterer Ariana Maher are bringing something completely different to this series. This is an ongoing Bond story, but it also stars someone else, a mystery man that won’t get out of Bond’s way, on a global scale. They’re sometimes foes, sometimes allies, but Bond and this charming, deadly mystery man are constantly chasing after the same dangerous things for different reasons,” said series editor Nate Cosby. “Greg’s conception of this race-the-clock, spy-vs-spy dynamics is really going to excite people, and Marc’s superior storytelling and incredible attention to detail will delight you.” 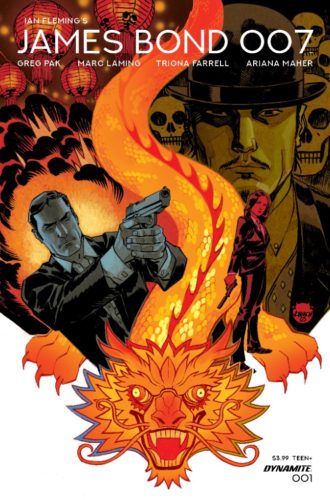 “Greg Pak is hands down one of the best writers in comics today,” said Nick Barrucci, CEO and Publisher of Dynamite Entertainment. “With James Bond being one of the most iconic characters in the world, having Greg on this book is a perfect match, further complemented by the incredible Marc Laming, who has a phenomenal range in his artwork.”

In 2014, Dynamite Entertainment made headlines across the comics industry and beyond with the news that the New Jersey publisher had secured the license from Ian Fleming Publications Ltd to produce the first James Bond comics in 20 years. Dynamite’s newest series, James Bond Origin, is a definitive account of James Bond’s exploits during World War II and will launch in September.