Today, Hell was unleashed on Earth, again. Hulu gave ComicCon@Home a peek at the lone surviving Marvel series they were developing, Helstrom. You may notice that nowhere in the trailer below does Marvel actually get mentioned. Instead, Helstrom looks like a vaguely interesting supernatural mystery, but also like one you’ve seen before. What’s survived from Marvel Comics are siblings Daimon (Tom Austen) and Ana Helstrom (Sydney Lemon), and even then they had to drop an ‘L’ to make it to TV.

Also, Ana’s name has been shortened from Satana. Because in comics, Daimon and Satana Hellstrom are quite literally the children of Satan — though if you’re a comics reader, the question is which ruler of Hell? It’s shifted around a bit. First appearing in the pages of Ghost Rider, Daimon was an exorcist and general demonologist on a quest to confound his father wherever he could. (The ’70s were a wild time for Marvel.) His sister Satana appeared a bit later, with both of them possessing supernatural powers and wavering occasionally on whether they were good or evil. 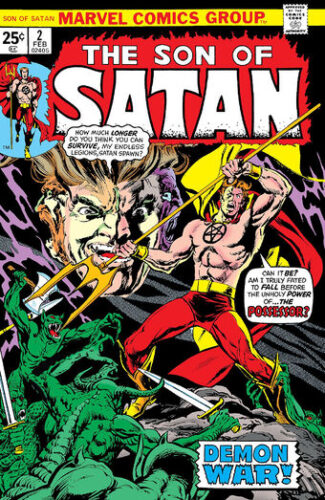 The plot description for Helstrom has these siblings hunting a serial killer who may or may not be their father. Supernatural elements are clearly there, and once upon a time, this show was intended to stand alongside a Ghost Rider series. Rumor has it that Marvel Studios head Kevin Feige wanted to take Ghost Rider back for the movies, but Hulu announced a slew of series from Marvel Television that have all since fallen apart — except for this, which even survived the closing of Marvel Television itself.

Take a look at the trailer. Will you watch it on October 16?

Fanboy Planet is an Amazon affiliate. Any Amazon purchase made through links or search boxes on Fanboy Planet may generate revenue for the site.