Two legends in the comics industry come together for the first time. One had a spectacular run on Fantastic Four over a decade ago, among other groundbreaking writing, and one… he drew the X-Men, the Avengers, Batman, and more, and his design background changed the language of comics. How have they never teamed before? No matter. They’re together now — with a Fantastic Four story that will only bring out the best in each other.

Sure, I don’t know that. But when you tell me that Mark Waid and Neal Adams are collaborating on a book, it’s a solid educated guess that it will be nothing less than spectacular. Fantastic Four: Antithesis is due to hit comics shops in August, and there’s a little video interview with Waid and Adams below…

Next month, two comic book greats join forces to deliver a Fantastic Four tale for the ages! Industry legend Neal Adams and Eisner Award-winning writer Mark Waid bring you FANTASTIC FOUR: ANTITHESIS, a modern Marvel blockbuster jam-packed with a fan-favorite roster of Fantastic Four heroes as well as a new villain guaranteed to send shockwaves throughout all of fandom. While Mark Waid is no stranger to Marvel’s first family, having penned a character-defining run back in 2002, FANTASTIC FOUR: ANTITHESIS will be the first full-length Fantastic Four story ever illustrated by Neal Adams.

“Working with [Neal Adams] has been on my bucket list since I was kid,” said Waid. “This was the perfect opportunity.”

“There’s lots of surprises,” promises Adams. “We got to really jam a lot of stuff in there.” 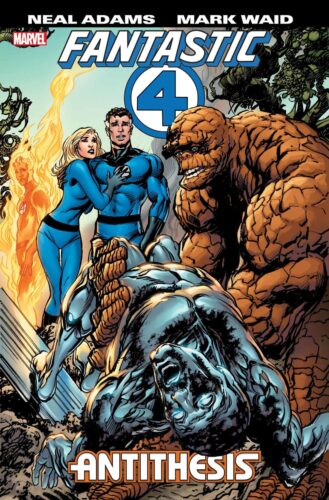