“I would go see that if I hadn’t had to watch it so many times,” writer/director Josh Boone said after ComicCon@Home showed the opening scene and an extended trailer for his upcoming film The New Mutants. His cast — clearly bonded after years of “is this going to come out?” — laughed hard.

Though a shorter panel than expected, it was a fun conversation led by Ira Madison III. Most of the questions went to Blu Hunt and Maisie Williams, making it seem (appropriately) as though their respective characters Danielle Moonstar and Rahne Sinclair form the emotional spine of the film. As seminal New Mutants artist Bill Sienkiewicz showed up to confirm, Boone’s script relies heavily on the arc he and Chris Claremont created known as “The Demon Bear,” in which both young women face the darkness in their pasts.

The others aren’t just along for the ride, of course, as Boone introduces Sam Guthrie (Cannonball), Roberto Da Costa (Sunspot), and Illyana Rasputin (Magik) in the film. Madison’s questioning seemed to typecast the actors. Anya Taylor-Joy admitted that though she may seem to specialize in quirky loners, the movie was shot so long ago that Illyana is actually the first of such roles she played, or as she specified, “…the first to stomp into a room.” She averred that she enjoyed playing Magik, because who wouldn’t love the metal arm and sword?

The biggest giggles from the cast came with a somewhat embarrassing story from Henry Zaga, playing Sunspot. In order to play a scene shirtless and do justice to Sunspot’s physical shape, he accidentally dehydrated himself. 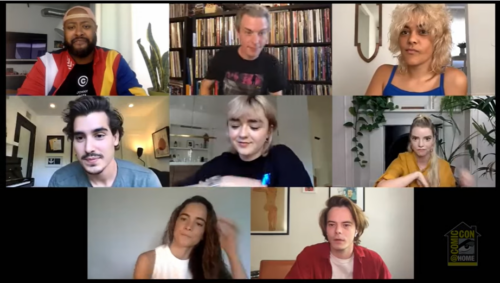 They may have peaked up front at making the audience laugh — the panel began with the title and the original opening date. Then that getting crossed out and replaced with the next opening date. Then that crossed out and replaced with another. Word balloons popped up with online complaints about the delay. And finally — August 28, “…fingers crossed.”

But here’s the thing: no one, absolutely no one, would blame Disney if they did what Orion just did with Bill & Ted Face the Music: if theaters are open, it will have a theatrical run. If they’re not, it will be VOD. This shutdown has been going on since March. We get it. And while I’d love to sit in a theater and see this (and the panel had a sneak preview sweepstakes attached), it may just not be possible. That’s not Disney’s fault. It’s the world. UPDATE from former Fanboy Planet contributor David Tapia: apparently, Fox movies have to go to HBO first, so VOD needs to be the way rather than Hulu or Disney+, so that Disney can get something out of its initial release. Makes sense.

And me? I want to see The New Mutants fight the Demon Bear.