It is the day after a political pundit has been banned from YouTube and Twitter for calling for public beheadings. A believer in QAnon has been elected to the House of Representatives. And it’s been years since this culture began arguing over the value of “objective facts” over “objective truth.” For some of us, there’s been no better place to turn than graphic fiction to help navigate this fictionalized reality. To be fair, many of us have found comfort in Grant Morrison’s belief that the better idea of Superman can dispel the darkness. Thus there’s never been a better time for two Image series to explode into our minds: Crossover (one issue out so far) and The Department of Truth (two issues out so far).

Both books wrestle with the concept of collective beliefs affecting the nature of reality. Crossover, by Donny Cates, Geoff Shaw, Dee Cunniffe, and John J. Hill, promises a more optimistic take. Though it may be slightly less chewy than The Department of Truth, it’s still a book that we should be talking about for a long time. 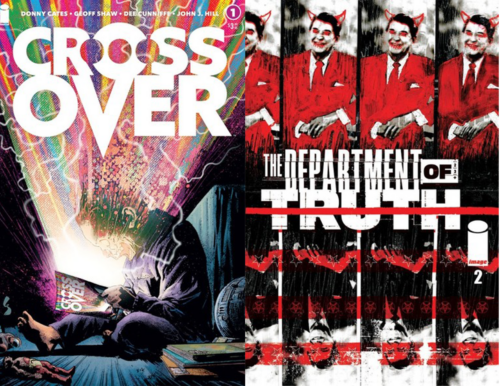 In 2017, Colorado was rocked when characters from comic books appeared in the real world, fighting in a big summer cross-over event that bled to our reality with devastating consequences. Though Cates references well-known heroes, none appear up close in this book. With a nod to Kurt Busiek and Brett Anderson’s Astro City, this book focuses on the regular citizens of the U.S.A. deal with the aftermath. At least one hero had the bright idea to seal Colorado up in an impenetrable dome so their battle to change the universe wouldn’t spill over to the rest of the world.

Of course people have turned against the very idea of superheroes. Some haven’t, but as we’ve seen in real life, it’s the extreme voices that sound the loudest. The true believers remain comics shop owners and employees, who still keep the faith. But it’s a violent world inside and outside of that dome.

Cates escalates the tension, writing a response to the 2017 event that feels terribly real, without abandoning his central premise that superheroes — at their best — are supposed to be about hope and inspiration. Shaw’s and Cunniffe’s art mixes styles a bit to make the point. We’re not in a 4-color world anymore, with Shaw moving from cartoony to more realistic depending on the needs of the page, and Cunniffe providing one of the most gorgeous coloring works you’ll see in comics. When it syncs perfectly — and it often does — it evokes Dave Stevens’ work, an artist who consistently told stories to inspire. (There’s also a credit to Mark Waid for story editing.)

The Department of Truth does not promise a brighter tomorrow. Martin Simmonds’ art unsettles the reader beautifully — a direct descendant of Bill Sienkiewicz and Ben Templesmith, though slightly cleaner in layout. And it should be unsettling. Though maybe we can call it satire just to feel safe, James Tynion IV sideswipes those conspiracy theorists whose beliefs are gaining a ridiculous amount of transaction. As a character in an underground bunker comments, “never thought the flat earthers would subsume the moon truthers, but this is a wild world, isn’t it?”

Why it matters to the Department is that there are cabals who know that if they can get enough people to believe their conspiracy, it will become truth. And the Department, led by a surprising figure, works constantly to keep reality — sane? The first issue saw FBI agent Cole Turner recruited, discovering the terrible secret behind prevalent conspiracies. With the second issue, Tynion reveals that Cole was himself caught up as a child in a prevalent urban myth that did — in our actual reality — destroy lives in the 1980s. And though of course it was just a myth, it may still trip him up in working for the Department.

from The Department of Truth #1 from Image Comics. Art by Martin Simmons and Aditya Bidikar.

Tynion also points out that even when you don’t believe the theories, everybody knows at least some of them. He even has Cole ask his husband which one is his favorite. It was a funny moment, but it’s like asking somebody what their favorite superpower is — there’s no hesitation with the answer. Whether we admit it or not, we’ve all been entertained by a conspiracy theory, even if we haven’t entertained it.

Crossover and The Department of Truth aren’t exactly mirror images of each other, but do show readers two sides of the same coin. Today, we’re asking ourselves, what do we really believe? Neither book has the answer. But they both ask the right questions.

Fanboy Planet is an Amazon affiliate. Any purchases made through Amazon links or searches from this site may generate revenue for us. As always, we encourage you to support your local comics shop.