Though best known for his stand-up, comedian Jim Gaffigan has been fighting for justice over the past few weeks, albeit on Twitter. Today, it looks like he’s joining the Justice Society of America, as Entertainment Weekly reports that he has been cast as the Thunderbolt for season 2 of the (now) CW’s Stargirl. Thunderbolt is a “genie,” though sometimes connected to the 5th Dimension with a similar power source as Superman’s nemesis Mr. Mxzyptlk. No matter the backstory, he’s consistently as the CW describes him: “…the wishes he grants often cause more trouble than the wish-asker would ever expect.” 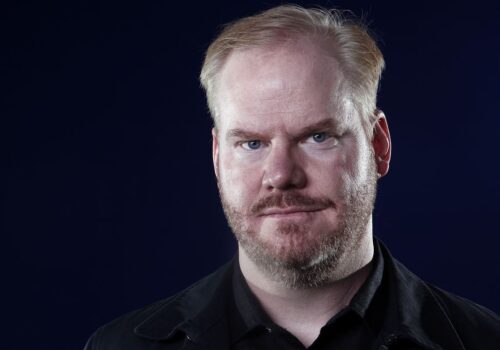 He’s a hero, just one originally created as comic relief back in 1940, appearing in Flash Comics #1. Actually, that was his initial human partner, Johnny Thunder, the 7th son of a 7th son who was deemed a special child by the culture of Bahdnisia. They chanted the phrase “Cei-u” over the baby Johnny, but he grew up not knowing that he had any special abilities. As a somewhat bumbling Andy Rooney-type adult, whenever he’d say “Say you…” magical wishes would be granted. Eventually it was revealed to be the work of the Thunderbolt, and they both served on the JSA in All-Star Comics. Through many reboots, Johnny Thunder has been a minor character though often treated as key, most recently in Geoff Johns and Gary Frank’s Doomsday Clock. In 1998, an increasingly senile Johnny Thunder placed the Thunderbolt in a ballpoint pen (lamps being hard to come by), which was given to teen-aged Jakeem Williams by Jay Garrick, the original Flash of the JSA. 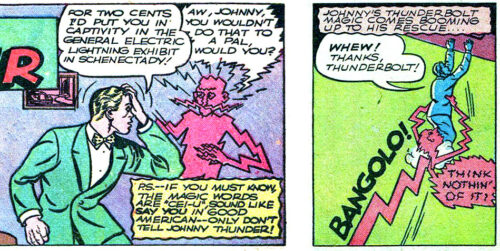 Taking the identity of Jakeem Thunder, Jakeem and the Thunderbolt eventually joined the JSA, with the Thunderbolt having merged with Johnny to save his lifelong friend. Something along those lines may have played out in Stargirl‘s Justice Society history, as the character description goes further to say “…the Thunderbolt’s heart is always in the right place, even if it is wounded by the friends he has lost throughout his long existence.”

In Stargirl’s 1st season, Johnny was shown as a member of the Justice Society, and Courtney (Brec Bassinger) took a pink pen (which crackled briefly with electricity) from Justice Society headquarters. Twice in the show, Jakeem has been referenced, though not directly enough to be more than an Easter egg for fans. Whether Gaffigan voices a Thunderbolt who retains Johnny’s personality remains to be seen. But it would be cool if the CG representation has Gaffigan’s features. The Thunderbolt is powerful, but yes, he can act like a middle-aged sitcom dad. 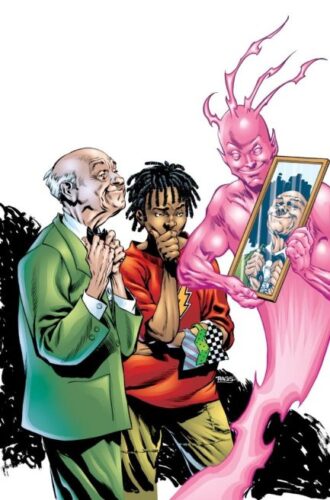 It would also be nice if Henry Thomas got to appear physically as Charles McNider, aka Doctor Mid-Nite. He voiced an AI with McNider’s personality and memories in Season 1, but we never saw him. Let him have a flashback, if for no other reason than to answer a question more burning than who is Eclipso or who is the Shade. Who has been feeding Hooty the Owl? 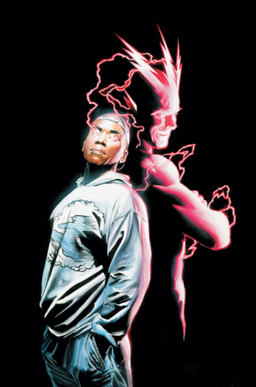