It can’t all be Star Wars and Marvel. Walt Disney Studios’ panel at D23 continued today by showing off four of the big live-action features coming from the actual Walt Disney Pictures label in the near future.

Above you can see the first photo of Emma Stone in Cruella, the live-action prequel to 101 Dalmatians with Stone as a younger Cruella De Vil. The new film will be set in 1970s London and have a “punk rock” vibe. Stone appeared in a video from the set, appearing to argue with a Dalmatian. The film also stars Emma Thompson, Paul Walter Hauser, and Joel Fry, opening May 28th, 2021.

Jungle Cruise showed off two trailers, one featuring Dwayne Johnson and the other featuring Emily Blunt.  Star Dwayne Johnson said he drew inspiration from Humphrey Bogart, Harrison Ford, etc. in what is a “throwback adventure.” Several on hand said it’s a film that tonally “fits into the Pirates universe”.

After Johnson showed a version with him very much the star, co-star Emily Blunt showed her version, poking fun at Johnson’s macho persona in the film. Both engaged in banter about playing Maui vs. Mary Poppins, which got the Disney fanatics off their seats. Both stars spoke on the legacy and the importance of the inspiration of the film, the iconic ride in which Walt Disney himself was the first ‘skipper’. 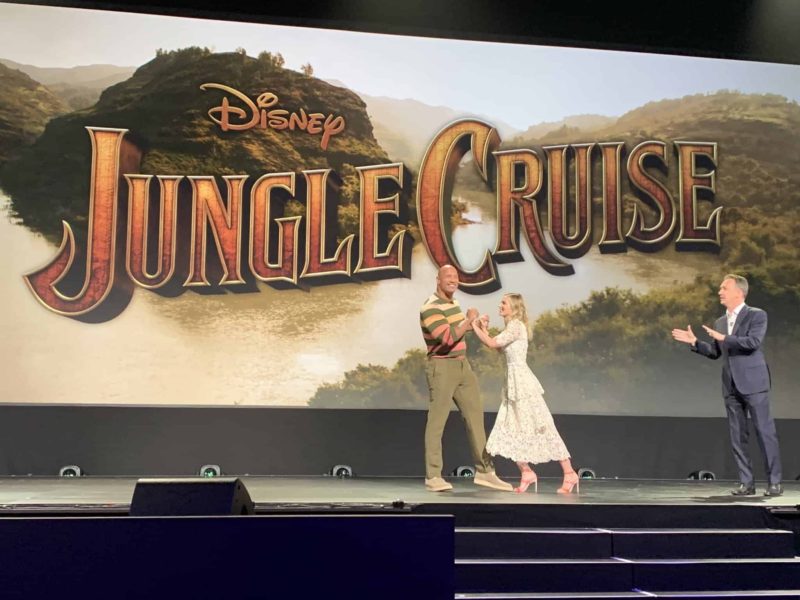 Also featured was Maleficent: Mistress of Evil with new footage showing off an awkward dinner scene between Angelina Jolie and Michelle Pfeiffer’s characters with jabs about motherhood – the fiery conversation essentially kicking off a war. Chiwetel Ejiofor’s role as the leader of the Dark Fae got further screen time along with a conversation between Maleficent and Aurora about marrying Philip (Pfeiffer is his mother). Jolie, Pfieffer, Ejiofor, and Elle Fanning were all present.

Jolie  spoke about why she wanted to return, saying she missed the character and loved the original very much. “We fight for the belief that what makes you different makes you stronger,” she said. “And what defines family is what you believe in and how you love. It’s not just blood. It’s not just the same.”

Finally director Niki Caro showed up to talk about her approach to Mulan, saying, “[I’m] excited for audiences to experience this story on a truly epic scale. Action sequences are explosive. It’s the story we love, but in a real visceral way.”

Two scenes and a short trailer were shown, one scene was comedic as a spider invades a tea ceremony. There was also the matchmaker scene. Numerous attendees indicated the film feels very culturally authentic and the battle choreography is impressive. The film’s star Crystal Yifei Liu – herself in a bit of controversy this week – was not on hand.

Despite rumors that spread like wildfire, there was not a sequel announced to Aladdin as many expected. Even expected casting announcements on The Little Mermaid didn’t happen. But hey… dalmatians!