The Force was with D23 Expo.

Walt Disney Studios kicked off its panel this morning with J.J. Abrams and Kathleen Kennedy coming out for Lucasfilm and Star Wars: The Rise of Skywalker.

Much of the cast appeared, minus Ian McDiarmid and Mark Hamill,  with them to discuss the upcoming sci-fi epic which wraps up both the new trilogy and the nine-film Skywalker saga. A new poster and sizzle reel premiered during the panel, with everyone in the audience receiving the poster. (Chairman Alan Horn again made the connection between 20th Century Fox and Disney holding all of the rights to all of the films which will be available on Disney+).

The breathtaking footage ends with Rey in a dark cloak holding a red Sith lightsaber that then flips into a Maul-like two-bladed one as she and Kylo battle amongst crashing waves.

Abrams says the late Carrie Fisher’s Leia is “really the heart of this story…. we could not be more excited for you to see her in her final performance” which comes from unused Force Awakens footage that was able to make this all possible.

Keri Russell revealed she plays Zorri Bliss, a shady criminal who is an old friend of Poe’s and gets to wear a gun-wielding red and gold costume.

Kennedy did not reveal any other plans for Lucasfilm theatrically, as it appears their immediate focus will be on their slew of Disney+ shows, with no mention of new trilogies from David Benioff/D.B. Weiss or Rian Johnson. Star Wars: The Rise of Skywalker will arrive in theaters this Christmas. 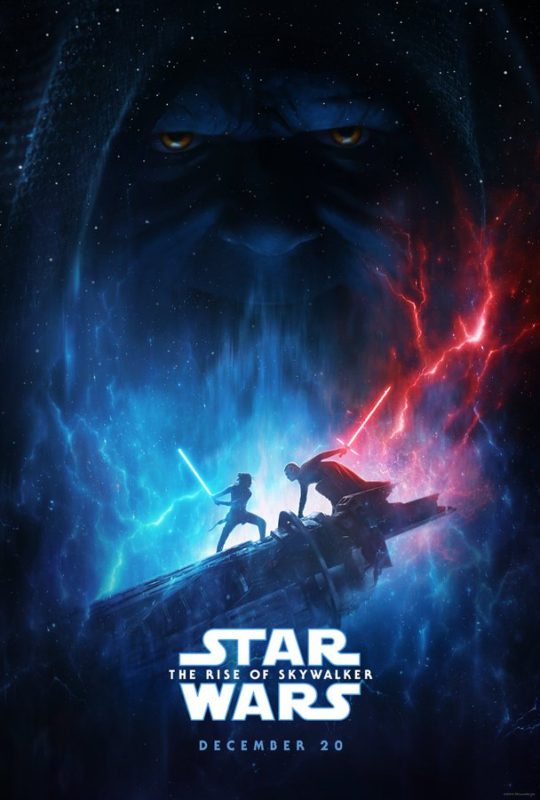