“It’s okay to make believe, but it’s not okay to fake believe.”

Those words capture just a slice of the message that Imagineering giant Marty Sklar imparts in his new book, One Little Spark!: Mickey’s Ten Commandments and The Road to Imagineering 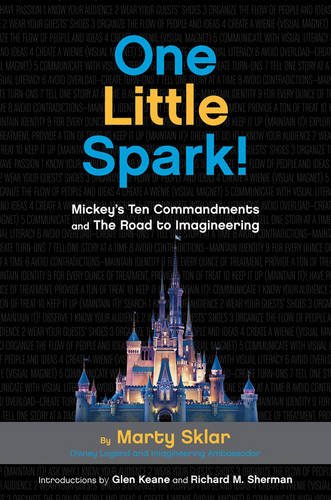 which debuted at last month’s D23 Expo in Anaheim. Actually written in the Afterword by Kevin Rafferty, the quote sums up one element that makes creativity so important, and yet sometimes so hard to accomplish. You can sell an image, but you have to have sincerity behind it.

Written in answer to the oft-asked question, “How does one become an Imagineer?”, the book really lays out a larger path for success in whatever your endeavor may be. Sklar, who served as chief creative executive at Walt Disney Imagineering until his retirement in 2009, oversaw the development of nine theme parks, and knows how to shepherd a project to fruition.

It centers around storytelling, a key element of presentation in any business, not just movies and theme parks. The rules laid out within Imagineering, “Mickey’s Ten Commandments,” contain ideas that can guide far more than trying to create a ride or write a script. Among other things, they put a focus on understanding your client, or your reader, or your customer. Though Sklar oversaw many successes, they didn’t come as easily as you might think.

He’s honest about the failures, with each of the first ten chapters providing examples of the commandments in two categories: the Mousecar and the Goof. The Mousecar (established by Walt Disney to honor contributions to the company) represents an example where the lesson is accomplishd well. The Goof goes to where a project was well-meaning but went wrong. You might be surprised at his examples. Sometimes you don’t hit it out of the park, though Disney often does. Sklar reminds us that it’s important to learn from the failures, which is a hallmark of creative development too often minimized.

Taking the title from the Sherman Brothers’ theme song to “Journey into Imagination” at EPCOT Center, One Little Spark follows up its overt lessons with viewpoints from a variety of Imagineers in many different disciplines. All of them followed that spark, but they’ve brought creativity and imagination into unexpected areas. Though primarily aimed at those who want to work for Disney, Sklar’s book provides plenty of inspiration well beyond that goal.

This is a book staying not too far from my work space, so I can pick it back up and look for a little encouragement in my day job and in my other creative endeavors. You might want to have it on your stack, as well.