If you’ve caught the new robotic Batman inhabited by James Gordon, you know that things just aren’t what they used to be in Gotham City. For the past few months, that version of Batman has been running around Batman, Batman Superman, Detective Comics and Do We Have Any Other Bat-Titles? from DC Comics. By the time Batman v Superman: Dawn of Justice hits movie theaters, Bruce Wayne will have assumed the cowl again.

Not because Robo-Batman is that good, but because the end of Batman’s saga as collected this week in The Joker: Endgame

all those years ago, it’s a fitting end for a character whose story cannot end. Actually, it ends two characters, though we all know they’ll be back because licensing and our cultural machine demand it.

The gist of the story has also been collected as Batman: Endgame, but this hardcover collection from DC pulls the story together in an unexpected way. By including all the cross-over books (not titled Batman), DC editorial actually makes a case for this kind of crossover to exist. Though Scott Snyder and Greg Capullo drive the main narrative as The Joker plays his last apocalyptic joke — terrible and frightening — crossover stories by James Tynion IV, Becky Cloonan, Brenden Fletcher, and more color in the dark corners. The plot doesn’t necessarily need it, but it turns Endgame into something far richer than just “the final battle between arch-enemies.”

In a nutshell, The Joker has pulled out all the stops, creating a version of his Joker venom that threatens to turn G 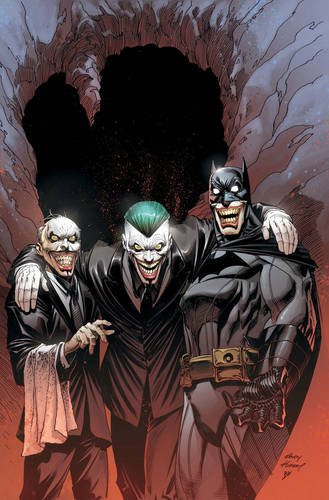 otham City into The Smiling Dead. Somehow, he manages to infect every member of the Justice League, even Superman. (And it’s the only weak spot in the plotting — because of course Kid McCaw and I tried to figure out today just how that could have happened.) As Batman, aided by Alfred Pennyworth’s daughter Julia, struggles to find a cure and solve the mystery, the evidence points toward the Joker being far more than anything anybody could have suspected — except, perhaps, those who feared him from within Arkham Asylum.

That’s where Tynion’s stories come in, as five former inmates hold a doctor hostage and tell stories about the Joker’s origins — stories that are far older than his supposed first appearance five years earlier as The Red Hood. Each one, illustrated by a different appropriate artist, sustains a creeping dread about this villain that some have taken to just calling “The Pale Man.” Cloonan has a little fun with in an issue of Gotham Academy, but even reframing them as campfire ghost stories, these takes on the Joker are haunting.

This is Snyder and Tynion elevating Joker to myth and legend, while still rooting him somewhat in the rules of the DC Universe. Rumor has it that Grant Morrison wanted to do something similar years earlier, but Snyder built it slowly, from “The Court of Owls” to “Death of the Family.” It feels earned, and not obvious.

More importantly, despite there being earlier arcs that build to this, The Joker: Endgame reads perfectly well on its own. By this point, it’s hard to imagine a reader coming at this not having a basic idea of who The Batman and The Joker are. Some of the side characters might be new to a reader, but they’re introduced in the midst of such a pulse-pounding story that it’s easy to just accept them and move on.

We’ll never get it in live-action, because it veers so far away from the base layer of “realism” that all superhero movies want to take, but Snyder’s vision here would make one heck of a gripping film. Maybe the animated movie series will head that way, since they’ve already played a bit with the Court of Owls, a long-lived secret society maintaining its own sense of order behind the scenes of Gotham.

The Joker: Endgame makes a fitting end to Batman’s story. But it’s also so good that it will make you crave more. The market demands that Snyder and Capullo keep telling the story, but they’ve made themselves a hard act to follow.