Tomorrow, it begins. Hordes of Disney fans will swarm the Anaheim Convention Center (heck, they already have) for the Expo of all things Disney. Tonight, while there’s still some space on the convention floor, Disney took some pictures for their own blog — it’s only fair — and let slip some images of the places we’re going to want to be visiting in the next few years.

Under a pavilion banner of “Imagining Tomorrow, Today,” DPEP (that’s Disney Parks, Experiences, and Products) have placed models of some wondrous lands — but one appears to be out in space.

Though all we see is concept art so far, it’s been long promised that Walt Disney World would take your visit to Galaxy’s Edge a little further out than Disneyland Resort could. And it’s true — they’re unveiling the starcruiser Halcyon, centerpiece of a Star Wars vacation resort experience. Guests will spend a two-night adventure in Star Wars: Galactic Starcruiser. What little that’s been leaked makes it sound like it’s an immersive experience, with your own level of comfort determining how deep into the roleplay you want to go. Though yes, you’ll probably get shuttled down to the Black Spire Outpost on Batuu for a planetside visit, there’s going to be plenty to do in this resort hotel. 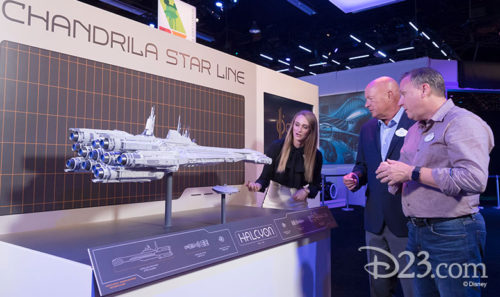 Will you feel like you’re out in space? The only thing we can guarantee is that your wallet will definitely feel lighter. You can speculate on how much it will cost in credits or dollars, and then drown your sorrows in some sort of intergalactic beverage. Just not the blue or green milk, because those are non-alcoholic.