When Warner Bros. announced a horror film version of The Banana Splits, fans’ gut reaction was “hmm…” instead of outrage. Though they have their fans and fond memories, the characters and their music had just been up on the shelf — other than that ridiculously catchy theme song. Which come to think of it is so catchy, it must be demonic. Perhaps their highest profile appearance in the last two decades was in a comic book crossover with Suicide Squad. In the age of Five Nights at Freddy’s, the Banana Splits as figures of terror… makes sense. 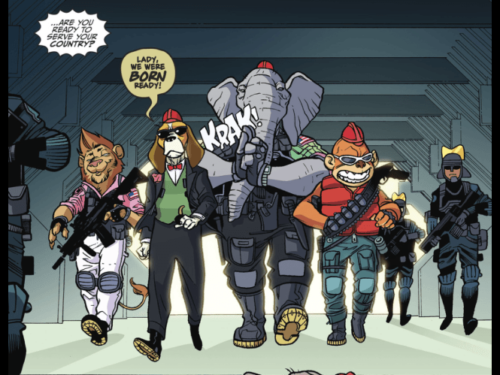 Yet one man is still trying to maintain a little of the old charming fun, and I mean that literally — one man is providing the voices of the three speaking Splits. (Snorky the Elephant only honks.) Stepping into the vocal cords of giants like Daws Butler, Allen Melvin, and Paul Winchell, Eric Bauza gets to show off the versatility of his pipes. I got to talk to Eric back at WonderCon, having no idea that he was going to be the Banana Splits. Luckily, Warner Bros. Home Video publicist Gary Miereanu supplied us with video updates providing a window into Bauza’s banana thought process for this film, out now on digital and coming to blu-ray and DVD Tuesday, August 27. 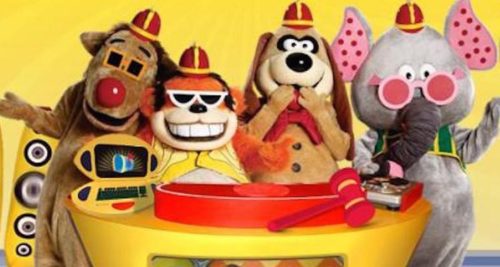 Produced by Blue Ribbon Content in association with Warner Bros. Home Entertainment and SYFY, The Banana Splits Movie offers a new take on the classic characters. The film follows a boy named Harley and his family as they go to a taping of The Banana Splits TV show, which is supposed to be a fun-filled birthday for young Harley. But things take an unexpected turn — and the body count quickly rises. Can Harley, his mom and their new pals safely escape?

Bauza, a two-time Emmy Award nominee, is the current voice of Bugs Bunny and Daffy Duck for Warner Bros., and is renowned for his voicing of Fozzie Bear for Muppet Babies, Splinter for Rise of the Teenage Mutant Ninja Turtles, Woody Woodpecker in the classic character’s most recent series, Puss in Boots in The Adventures of Puss in Boots, Leonardo in the recent Batman vs. Teenage Mutant Ninja Turtles, and hundreds of other voices.