Before Arnold Schwarzenegger even thought about yelling “GET TO THE CHOPPA,” there was a screenplay called Hunters, with a somewhat different vibe to the movie it became, Predator. And now, Dark Horse Comics will release an adaptation of that original work from long ago, continuing in a vein that has been a pretty cool trend for comics — showing us what might have been before studios and stars got their hands all over a concept. Even when the final film itself worked well — like Predator — it’s been intriguing seeing that original vision from the screenwriters. (Dark Horse did it with William Gibson’s Alien 3 screenplay as well as the original Alien, and BOOM! Studios adapted Rod Serling’s original Planet of the Apes script.)

In Predator: The Original Screenplay, a team of military specialists are on a rescue mission in the jungles of Central America. The details of the mission are classified, but the team soon uncovers a trail of lies and deceit. Something is observing them—tracking their every move. The hunt has begun!

Predator: The Original Screenplay #1 (of five) goes on sale June 10, 2020, and is available for pre-order at your local comic shop. “The Original Screenplay” stories (Alien 3 and Alien) are a line of books which present alternate storylines and events for the now classic sci-fi motion picture masterpieces. 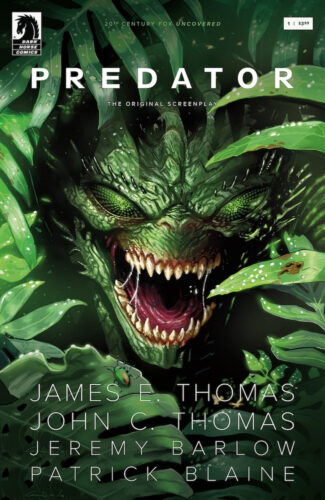