This is either brilliant, insane, or deliriously stupid. Perhaps it’s all three. Or perhaps when DC Entertainment moved from the East Coast to the West Coast, all the calendars got mixed up and they think today is April 1. While we got distracted with DC talking about “Rebirth” in June and thinking it was about superheroes, Dan DiDio quietly set about recreating Hanna-Barbera. Is this the “Rebirth” he meant?

Entertainment Weekly got the scoop this morning, revealing that DiDio and Jim Lee have reimagined some of the animation giant’s most venerable properties — and some of their most obscure. (Both DC Entertainment and Hanna-Barbera are owned by Warner, as is Entertainment Weekly.) A couple of these reimaginings, which will get published as regular books, may anger a lot of fans. When the magazine asked Lee what he thought the reaction would be…

“Outrage!” Lee jokes with a laugh. “I hope that they put a smile on people’s faces. I think we think of these characters so much as our childhood, and I want people to kind of embrace these updated versions of the characters and really understand that at the core, these concepts are not just limited to little kids.”

Though Lee and DiDio both are quick to speak of their affection toward the properties, some of them may seem “what’s the point?” For example, if you don’t like the new Scooby Doo TV series, with its Uncle Grandpa-esque take, does going the opposite direction into a Lee-designed Scooby Apocalypse seem much better?

Updating Wacky Races into a Mad Max-like post-apocalyptic road adventure also seems strange — at least to U.S. audiences. In Europe, Wacky Races is still hugely popular. So maybe we could get into this Wacky Race Land designed by Mark Sexton, one of the talents behind Mad Max: Fury Road. 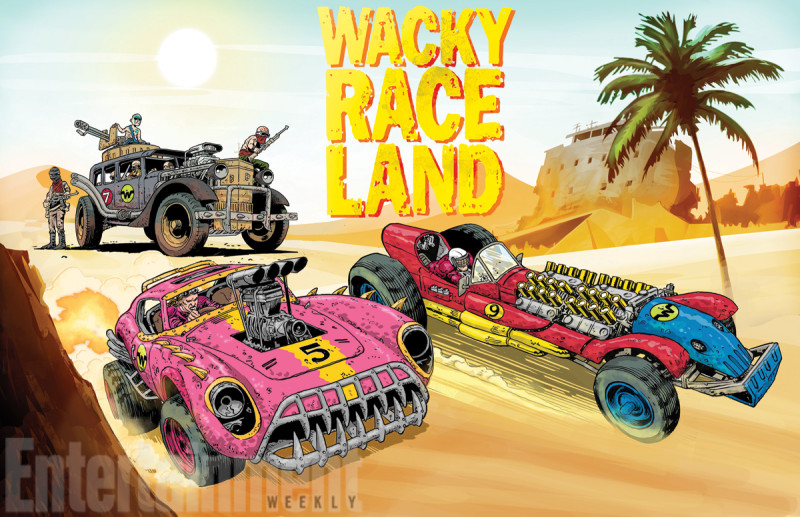 And though I’m skeptical, Amanda Conner taking on The Flintstones, revamping it into a modern family sitcom? Let us remember that the original modern stone-age family was aimed at prime time, so thinking of it more in terms of The Middle now than The Honeymooners might make sense. Still, it’s a bit jarring. Even when Pebbles and Bam-Bam grew up to be teens, Fred and Barney looked the same. Now? But Conner is a brilliant cartoonist, so… 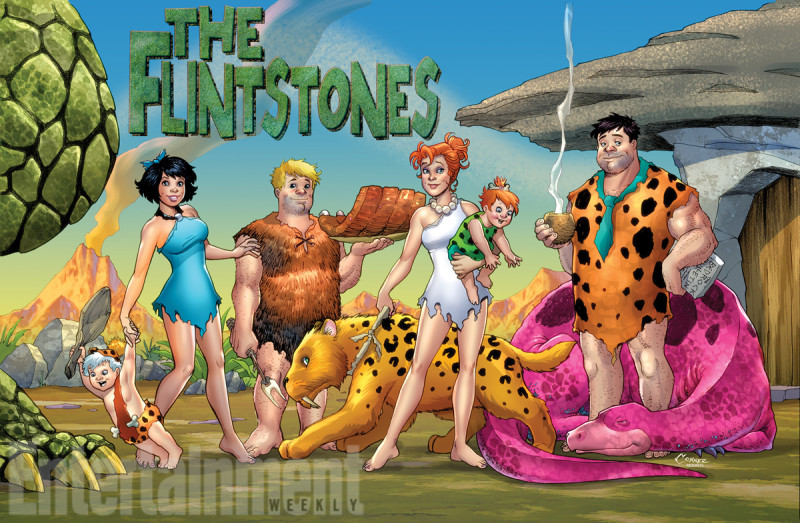 The one that has me most interested, though, is Future Quest. Created by Jeff Parker and Evan “Doc” Shaner, the book is described by Entertainment Weekly as a League of Extraordinary Gentlemen for Hanna-Barbera’s adventure shows. But let’s call it what it is — a shared universe title that teams up Hanna-Barbera’s greatest (and some obscure) heroes. Yes, I see a serious take on Coil Man from The Impossibles in the artwork. Clearly led by Jonny Quest himself, this team brings in Space Ghost, The Herculoids, Frankenstein Jr., The Impossibles, Birdman, The Galaxy Trio, and The Mighty Mightor. And THAT could be awesome without changing most of them much. Plus this team did the single best book in DC’s Convergence event, Shazam!

I’m still half-convinced it’s a joke, but Future Quest will be on my pull list in case it’s not. UPDATE: Shaner confirmed it’s real and I AM IN!