Ah. If there is anything I like, it’s a loving remake of a childhood classic. No, really!

If you’re my age (34) or thereabouts, you remember a game called A Boy and His Blob; a high-concept piece about a young rapscallion and his amorphous friend palling about in the forest and causing all kinds of mischief.

Also, you probably remember a game that looks like this: 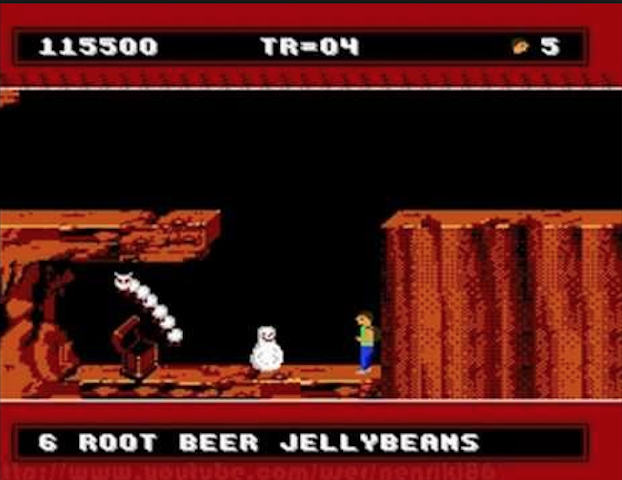 Well, my friends, that game has finally gotten a facelift. The best part? It has way more colors than the original!

The game starts where most great games start, when the main character is asleep in bed. That main character is a wee lad, who mysteriously lives in a humongous tree house large enough to hold giant alligator carcasses, Easter Island statues, and other impossibly heavy objects. Why does the boy live in a tree house alone? Why is the only food available an inexhaustible supply of jellybeans? Those questions are silly.

The main question is, why does this boy instantly befriend a hideous pale jelly that fell from space in the middle of the night?

Wait, no, the question is, why, when he first sees the blob, does he immediately lock it in a warm embrace? 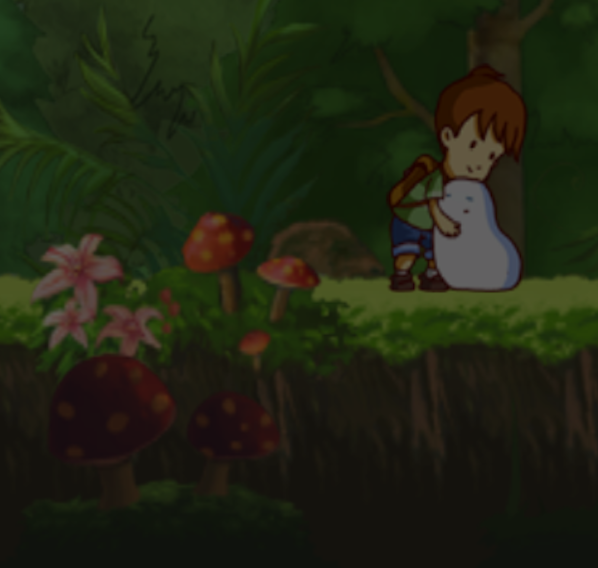 Also a silly question. It’s silly because it doesn’t matter. At least, it doesn’t seem to.

Gameplay is somewhat simple, with only keyboard controls available, finally freeing me from the ever-tightening noose that is the two-button mouse. You have a small selection of jellybeans that you have at your disposal in each level, and each one causes the blob to undergo what is most likely an indescribably painful and immediate transformation. He transforms into lots of useful things, like anvils, 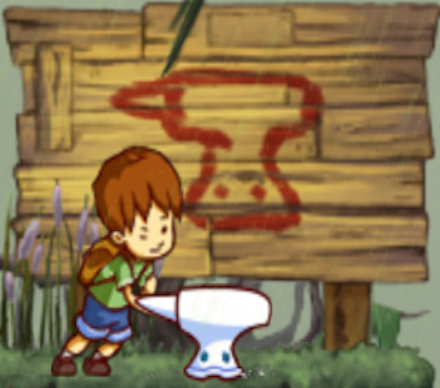 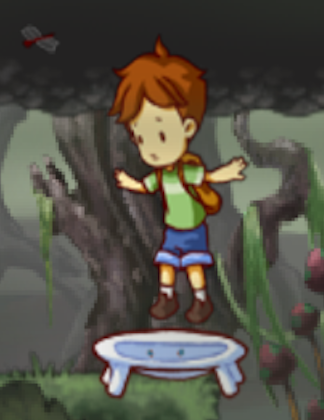 Where A Boy and His Blob begins to falter big time is its controls. They are just downright squishy. More than once (maybe more than a hundred times, really) I found myself attempting the exact same action because of the lack of responsiveness in the controls. That is not a good thing when you have to repeatedly maneuver and time your jumps and jellybean drops to avoid the bad guys. Unfortunately, all too often you will have to perform a quick series of jumps, bean drops, blob-calls, and bean switches to evade an enemy or drop one through a bean hole straight to bean hell. Well, unfortunately, you will be fighting the controls the entire way. Be prepared to redo what should be basic set pieces because your prepubescent avatar is too clumsy to turn around and drop a bean without having a conniption fit.

It results in a lot of these situations:

Dead, right next to a chest.

Those chests are consumed whole-hog by your blob, because you are a child, and children are weak. The chests are another enigma, because some of the chests are sought after by the blob like a cat in heat, and others…he just seems to ignore others.

Oh yeah, that’s right the bad guys. They are also blobs…but they are black blobs. How do you tell them apart from the good blob? It’s easy. The good blob is white. That’s racist.

But latent prejudice aside, it is all quite a casual game. The music is full of childlike wonder, replete with swooning acoustic charm and more glissandos than you can shake a stick at. Of course, music does not make a game. What makes a game, obviously, is killing.

Or was it watching an 8-year old fall to his death that makes a game? 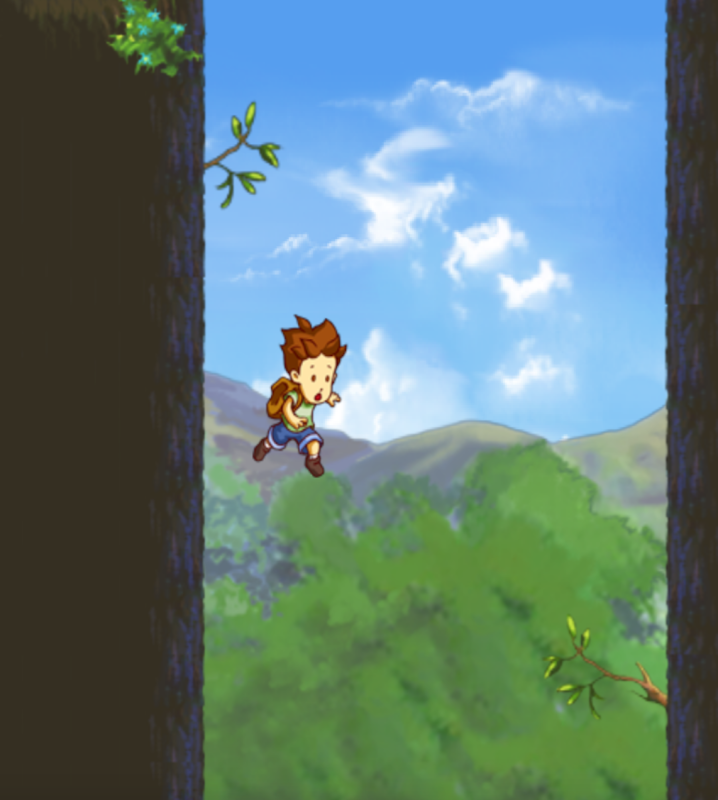 …because for some reason, I did that in spades, because dropping beans from sheer cliffs is sort of a theme in this one.

For all it’s worth, A Boy and his Blob is an easy to approach game, but it is also surprisingly…drab. It is dreadfully easy, and despite adding a few minor tweaks to the original, I cannot help but think that there is really something missing. The unlimited supply of beans, for instance, saps the imperative from every action, and the cartoonish image of your blob is more Glooplike than blob like. Please come to your own conclusion with the following comparative photographical evidence. 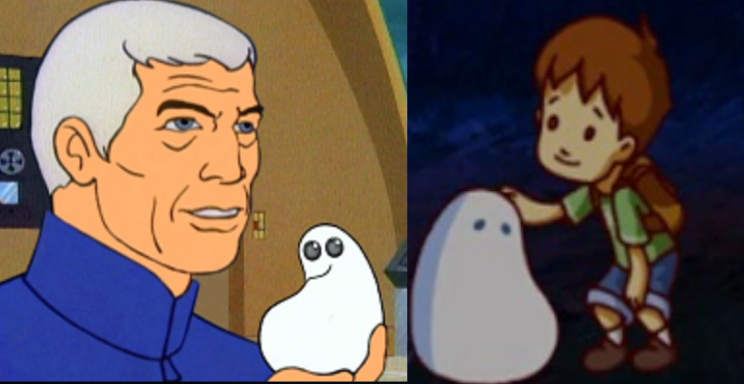 My verdict is, therefore, a painful one. For such a sweet little game, I just find the control scheme too vexing, clumsy, and unresponsive. Couple that with the fact that the game is so easy that the only way they could inject some artificial difficulty was to make the controls terrible and you have an absolutely sepia-colored experience. Maybe its that the game pretty much tells you what to do, with these signs that tell you which bean to throw for any given situation. 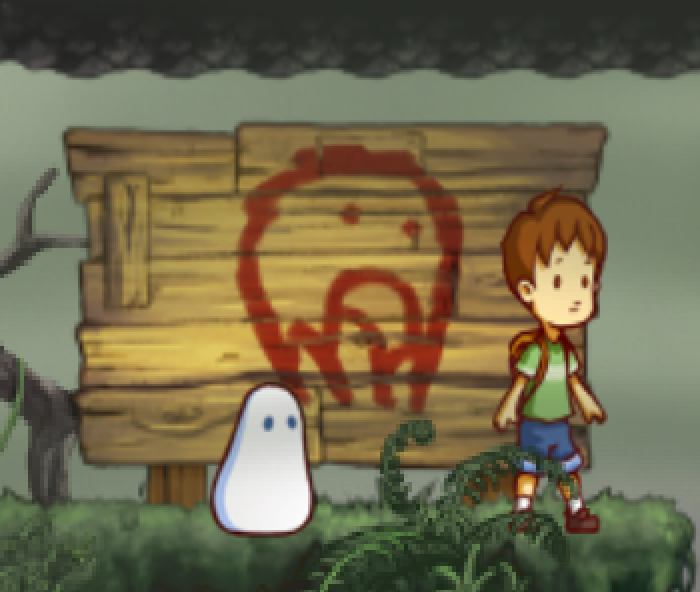 This over simplicity is an interesting problem because most of the games I review here are too arbitrarily difficult to recommend or have gameplay mechanics so obscure that by the time you get around the learning curve, the game is over and you are just sitting there angry and confused.

A Boy and His Blob is the kind of easy that gives you no passion to play. No desire to find all the chests, no sense of urgency, and no real sense of economy to save your precious beans.

Oh, by the way, the beans don’t even have flavors! They are just colored beans.

I do not often judge games based on their simplicity. However, there is a fine line between a hard-fought slog and one that does not even provide the necessary challenge to be engaging.

It’s just too easy, too disengaging, and the controls are too bad. However, it is extremely approachable and easy to play. I cannot in good conscience recommend this game to an adult…and I don’t tend to recommend things to children.