Fans of both DC Comics and the cinematic DC Extended Universe take note: 2018 may bring you the blueprint for how Green Lantern Corps will play out. Strictly speculation here, but DC just announced the latest book in the Earth-One line — Green Lantern, by writer/artist Gabriel Hardman, writer Corinna Bechko, and colorist Jordan Boyd. The team has previously collaborated on Star Wars: Legacy and the Image Comics title Invisible Republic.

According to IGN, Hardman and Bechko have recast Hal Jordan as an astronaut working for Ferris Galactic. His life changes when he finds a mysterious green ring. It’s the last remnant of the Green Lantern Corps, a group long ago killed by the Manhunters. Hal will not just have to master the ring; he must revive the Corps.

What would it have to do with the DC Extended Universe? Maybe nothing. But if the rumors are true that Green Lantern Corps will focus on a more experienced Hal Jordan training a young John Stewart, this Earth-One volume could provide a good backstory. 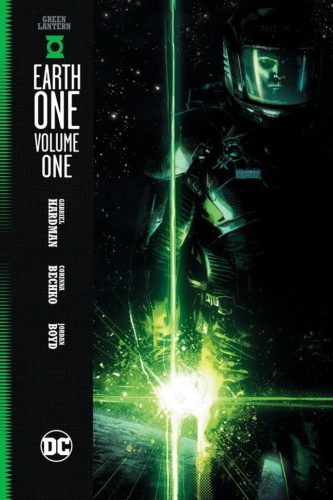 The Earth-One books offer modern re-imaginings of DC icons. Green Lantern joins Superman, Batman, Teen Titans, and Wonder Woman in the line. I say “line” rather than universe, because the other thing that makes these books extremely accessible to new readers is that they stand alone, much like the DC movies used to do. Superman portrays a much younger Clark Kent taking the mantle, and I’ve said many times that the two volumes (so far) of Batman: Earth-One are two of the best Batman stories of the 21st Century. Teen Titans recasts the team as the subjects of experiments, bonding on the run from government authorities. And Wonder Woman blends the original inspirations for the character with modern sensibilities.