SPOILER WARNING – This post contains spoilers for Planet of the Apes(1968), The Omega Man (1971), and Soylent Green (1973).  Read at your own risk if you have not seen all three of these movies.

If you like science fiction, there are likely two things you like about discussing it.  The first are the spoilers, but only shared with those who have also experienced them first hand. Repeat after me, I will never share spoilers with those who have not seen them first hand. You also likely enjoy the unexpected and sensational twist. The hook that turns much of what you’ve seen on its head. It’s fantastic when it’s a surprise, thus the spoiled surprise or spoiler.

Some of these events are so crazy as to have gone from horrific or shocking events to funny punch-lines. And so many of them have are known to more people than have actually seen the spoiler event first hand themselves.

I want to talk about one of these specifically. 1973’s Soylent Green is partially based on the Harry Harrison novel Make Room, Make Room. The book deals with a few New Yorkers in 1999, as overpopulation has started to make everyone’s life unbearable. If you’re not into reading novels, you can read Harrison’s short story Roommates which covers much of the same ground with the two main characters of both book and movie. 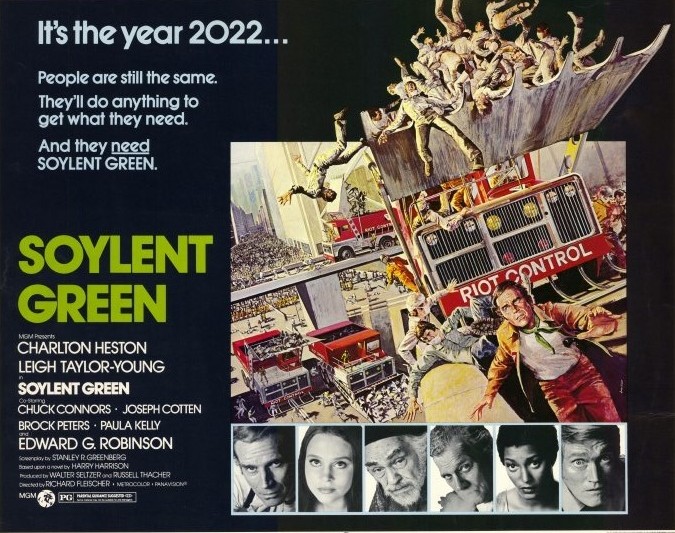 The big twist in Soylent Green doesn’t appear in the book or short story. In the film’s future of 2022 (still the future!) the “greenhouse effect”, what we used to call Climate Change and Global Warming when we discussed it 50 years ago, has killed much of our food supply and turned an overpopulated world into a starving and poverty-stricken experience.

The hero of the movie is Frank Thorn, a police detective played by Charlton Heston.  Heston made a career of playing heroes in science fiction movies with twists — “It was Earth all along” in Planet of the Apes,  “My blood will save humanity as I lay dead like crucified Christ” in The Omega Man to name two. Heston’s Frank investigates a murder, complete with suspects, red herrings, and a bigger plot twist than anyone expected.

Frank has an older and wiser roommate named Sol Roth, played by Edward G. Robinson. Ironically, as you’ll see, this was Robinson’s last picture before he died. We’ll get back to Sol in a bit.

Of course, you likely already know what Frank discovers: that the corporations are distributing a new food source, Soylent Green, supposedly manufactured from plankton. But it isn’t actually coming from our dead oceans. It is recycled people. The corporations are placating the general population by feeding them to themselves.  “Soylent Green is people!” a wounded Frank cries from his stretcher as he’s carried off.  “You’ve got to tell’em!” he shouts into the crowd as the film ends.

As I said, this was shocking when you were lucky enough to see it without it having been spoiled. Gross, vile, and disturbing. But over the years, the shock value has worn off through repetition. It’s a joke, even a prop as you can see from these pictures from my own bookshelf. 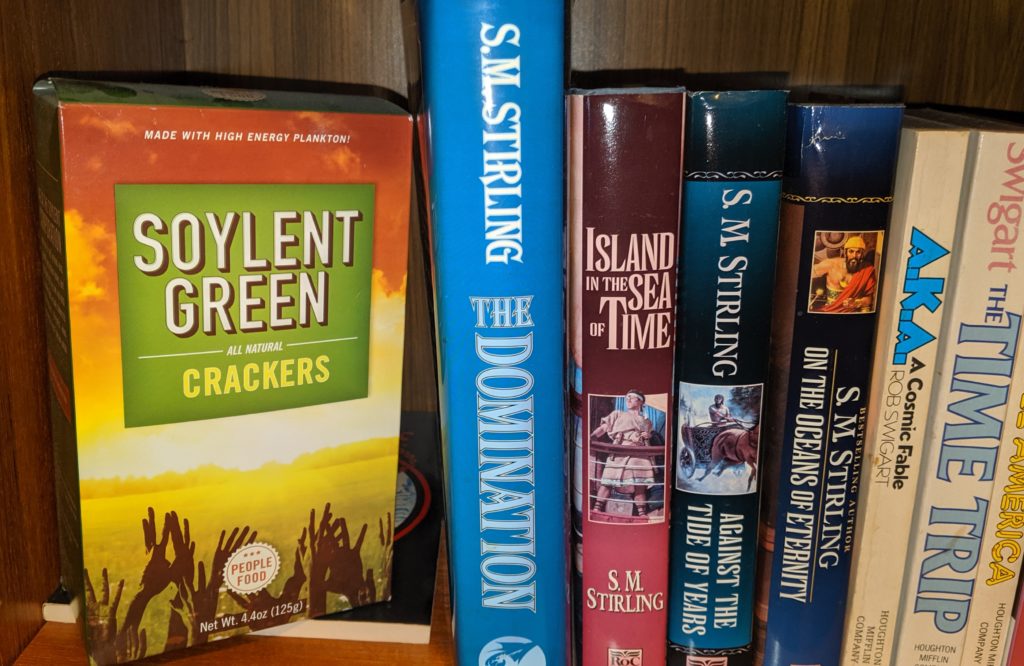 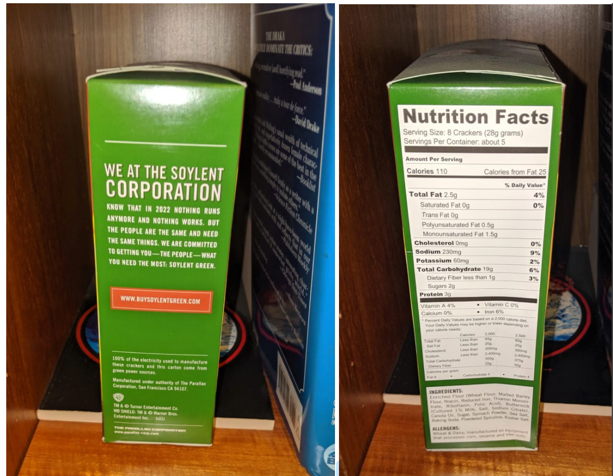 That box of crackers is always good for a chuckle. The shock has totally worn off, and the supposed absurdity of the proposition has left us with a weak joke. And this is especially true for people who know the spoiler even though they’ve never seen the movie.

And for those folks, they likely miss the real horror of this movie, as have so many people who have actually seen it.

Why? Let’s get back to Sol.

Remember, Sol is a lot older than Frank. He’s watched the world die. And he knew the world before things got bad. He can look at his environment and feel more than frustration, more than anger, Sol can feel real sadness at the loss. And that’s depressing.

So depressing, that in the pivotal moment of the movie, Sol heads off to an assisted suicide clinic, supposedly run by the government. Here Sol spends his final moments immersed in classical music and videos of the world before, the wildlife, the oceans, rivers, the nature, all so beautiful. Frank catches up with Sol here, and sharing this glimpse of the world now gone he weeps saying “How could I know, how could I ever have imagined?” For indeed, he could not have.

With Sol’s death the movie shifts back into detective story as Frank follows Sol’s body from the suicide center to an unmarked factory where bodies are rendered down into the substance that becomes the eponymous Soylent Green crackers. Before he can escape with his discovery he’s attacked and wounded, which leads to the final scene in the movie, the warning that everyone remembers.

It’s almost as sensational as the revelation in Planet of the Apes, with Heston on the beach in front of the Statue of Liberty, which of course is what the director was going for. The whole Soylent Green aspect of the movie was exclusively cinema; it was not part of Make Room, Make Room.

So what’s my point? Again the sensational aspect of this obscures the real tragedy and horror, the actual warning. We are so grossed out at the idea that we’re involuntary cannibals that the message is easily missed.

Depression is the real villain here. Even with its ineffective bits of revolution, world of tomorrow is so awful that depression is a generally natural state. Not because people can’t see babbling brooks and baby deer, but because there’s nothing life affirming about existence any more. At least for everyone not in the 1% of super rich. And that 1% has figured things out. Use the depression. Provide a service, the euthanasia centers, that both figuratively and literally feeds the populations needs. Depression is not a state of mind to be treated, but a state to be systematized and used by the corporations, the wealthy, the government, to both placate and manage the population. That’s the horror, that’s the evil. It’s right there, but we’re distracted by the cracker.

And what would that future day after Frank’s bloody revelations be like? Would it resonate and become as common knowledge as the spoiler is today? Would the physically, mentally, and socially wounded populace react with horror and revolt, or just admit that they need it to be the new status quo?

Science fiction aside, look at today’s politicians who can lie, cheat, and break laws without repercussions. The rich who have more wealth than they can possibly spend, but pay no taxes. Of corporations who are caught poisoning both the land and the people, yet still can pay dividends to their executives and stockholders. The powerful who deny climate change because it would cut into their bottom line. These are trite, almost comic-book level villains and villainy, but we’re living with them daily. And we put up with them, because even though the middle class is shrinking, and 1% of the population owns more than half the world’s wealth, we’re generally well fed and even more distracted.

And it’s not getting better.

Are we that far away from Soylent Green’s subtle message from 1973? Are we too focused on laughing at Frank Thorn’s sensational shouted warnings from 2022 that we are not watching for the subtler and more deadly manipulations?

Is it just a stupid movie from the ’70s or has it been Earth all along?

Fanboy Planet is affiliated with several online retailers. Purchases made through links on this page and this site may result in revenue.

About Ric Bretschneider 659 Articles
When Ric Bretschneider isn't producing the Fanboy Planet Podcast, he obsessively collects geek activities. If you Google him, you'd swear you're looking at five different guys. A professional software developer for decades, your computer likely has at least one application he's worked on. He consults with individuals and groups on how to effectively present and engage an audience. Lately he’s been into pro and fan applications of e-communities and podcasting. When he has a moment, Ric reads books and comics, and plays analog board and card games. He's here to help people, it's what he does.