If you haven’t been reading Marvel’s Star Wars comics, you’ve been missing out. Like many of the novels, the comics can simply go places that the movies can’t. They’re for hardcore fans that want a more complex narrative and focus than two hours a year can give — comics don’t have to be crowdpleasing; they have to please the Star Wars crowd.

One of the limitations of Marvel’s original run in the 70s and 80s was they were limited in scope. No matter how many cool side characters they created, those had to go by the wayside in order to keep the focus on the core movie cast. But Lucasfilm has learned a thing or two in the years since — and give credit to Dark Horse Comics, who helped them figure it out — and so the “comics only” cast (which may start leaking into other media) has become just as strong and fascinating.

Case in point: Doctor Aphra. Along with “her” droids (they might protest) Triple Zero and Beedee, there’s no doubt we’re following villains. But they’re great villains, and they often threatened to overtake Darth Vader as the stars of his book. It’s no wonder that Doctor Aphra is getting her own title, and noteworthy that she’s the first character outside of the film and TV canon to get her own comic. We can’t wait.

“What I wanted to do was show what makes Aphra tick,” says writer Kieron Gillen, in an interview with StarWars.com. “That’s the work I feel I’ve got to do with the character, and that kind of push and pull she has between the stuff she does, which is good and bad”.

Following her time in the clutches of Darth Vader, Doctor Aphra has barely escaped with her life. If he ever learns of her survival, he’ll hunt her to the ends of the galaxy. But for now, it’s time for a return to what she does best. With the droids 0-0-0 and BT-1 in tow, she’s off in search of rare artifacts from the galactic center to the Outer Rim and everywhere in between. Aphra’s got debts to pay after all. Just as long as she can stay one step ahead of the Empire, some Bounty Hunters and just about everyone else in the galaxy!

“We all love Aphra so much,” says Star Wars line Editor Jordan D. White. “We were overjoyed that she found a way to survive the wrath of the Dark Lord. Now, she’s free to continue her rogueish adventures in digging up old droids and weaponry and selling them to the highest bidder…so long as she can stay off the Imperial radar.” 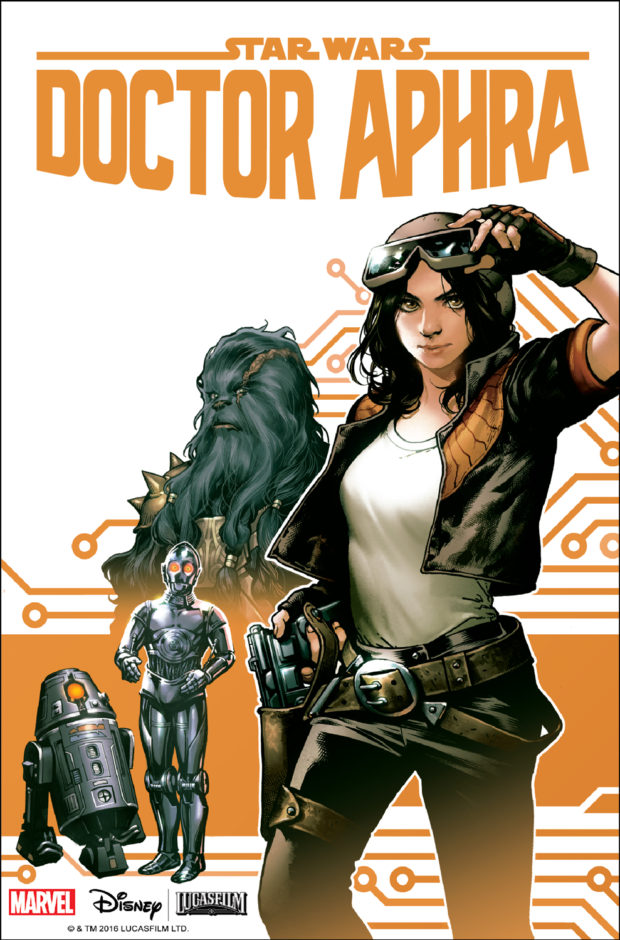 Just in case you hadn’t been reading Darth Vader, you can catch up through these fine books: