Doctor Who is usually considered to be science fiction, largely due to the framing device of time-and-spaceships from another planet, but even though most stories try valiantly to bash out a sciencey-sounding explanation for everything that happens, there’s usually a point where this attempt ends up being fruitless. 1968’s “The Mind Robber” is one of the earlier examples, an adventure which takes place in “The Land of Fiction” and includes threats that disappear if you are determined enough not to believe in them, which is pretty much the opposite of how one would normally define reality. Then there’s 1982’s “Kinda,” one of my favorite Doctor Who stories of all time, in which the antagonist is an intelligent serpent demon from another dimension who possesses people through their dreams and can be (temporarily) defeated by imprisoning it in a circle of mirrors. And of course there’s 2006’s “The Impossible Planet / The Satan Pit,” featuring a creature which makes a pretty good claim to being, if not Satan himself, a reasonable facsimile thereof. This might lead us to think of Doctor Who as being more in the vein of science fantasy, in the same family as Star Wars. But it might also make sense to regard it as a show where every episode might be a different genre unto itself.

For instance, Doctor Who has always done horror extremely well, but “Knock Knock” is perhaps its most modern stab at the genre. We’ve seen haunted mansions before (“Image of the Fendahl” and “Ghost Light,” not to mention “Hide”) and we’ve seen gruesome body horror (“The Crimson Horror”), and we’ve even seen alien woodlice (“Frontios”), but this is the first time we’ve seen that most important of horror tropes: six young adults falling victim one by one to a sinister family secret. 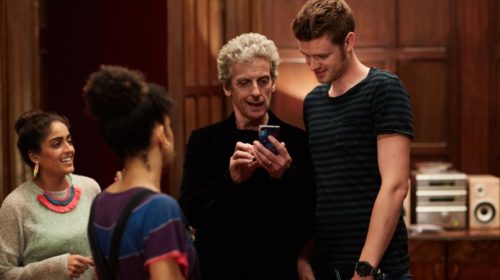 Well, it’s definitely important to this horror story, because it provides a ton of personality and humor to the first half hour of the story, when the Doctor shows up to help Bill move in with her new friends, and stays to follow up on his unerring instinct for extraterrestrial danger. Capaldi is magnificent throughout this story, in what is for my money his best performance to date as the Doctor, seamlessly switching from “see, I’m good at making friends” moments where he tries to ingratiate himself to Bill’s friends with her Spotify playlist and bluff his way through pretending he knows her music (inadvertently revealing her guilty pleasures) to deadly serious Doctor face where we can see he’s investigating something. He manages to play this same grimly ominous tone for laughs (one bit where he swoops owlishly out of shot like a comedy vampire, and another where he stops all conversation by asking with alarm and then delight, “what’s that smell?…is that Chinese food?”) and chills (reading off the names of the Landlord’s previous victims, then grinning icily and asking “where are they?”). Intoning what might have been the original, classic-era-esque title for this episode (“Infestation of the Dryads”) he pulls off a flawless Tom Baker impression, and has one of the episode’s best moments just by crunching a potato chip. 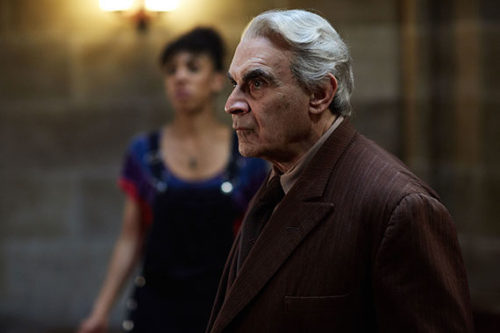 The banter between the students rides the thin line between lively (Paul flirting with Bill, who lets him down gently but firmly) and a little mean (the gang teasing Felicity about what seem to be an inconvenient multitude of phobias), which is perfect for a good horror story. All this not only lightens what would be a pretty heavy episode (with some of the most disturbing special effects we’ve seen in a while) with some Scooby-Doo laughs, it makes the whole thing hugely entertaining even before anything really starts to happen.

Tasked with playing against this goofiness is David Suchet, who as the Landlord exudes not only an impenetrable solemnity but also a complex blend of false paternalism, impartial malevolence, and stunted innocence. The role could in fact have been your basic Scooby-Doo villain in someone else’s hands, but Suchet, an RSC luminary with a resumé a mile long in every medium, approaches it with the utmost care, giving us every nuance of the Landlord’s injured psyche. It’s an astonishing (if, of course, deeply creepy) performance, making it all the more impressive that Capaldi is able to match its gravitas.

The story sings for most of its length, rather bravely (only four episodes in) splitting up the Doctor and his companion and pairing them up with others (Bill with her friend Shireen, the Doctor with their wide-eyed housemate Harry). It only drags a bit toward the end, when the truths of the house are revealed and the family secret the Landlord has been protecting and feeding decides not to be protected and fed anymore. It’s a resolution that must be earned, but also seems inevitable, and therefore several minutes too long. It also raises some perplexing questions: where did the so-called Dryads come from? Do they really only need to eat once every 20 years, and how in the world did the Landlord work that out? Why do they preserve one person and eat all the rest? How can a person who’s been eaten return to life, especially after it looks as though they’ve already given their energy to the family secret? Why is a process initiated by the sounds of a classical record interrupted by those sounds continuing indefinitely when the record skips? Some of these questions are genuine puzzlers, but others can perhaps be put down to the conventions of genre. Things in “Knock Knock” are a little bit magic because it’s a horror film packed into a Doctor Who episode, and almost every horror film is at least a little bit magic. 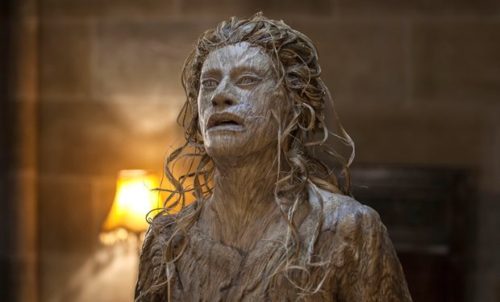 Postscript: the Vault. We learn that it’s probably a who in there rather than a what, since they like Mexican food and play the piano. We learn that whoever it is likes the parts of stories where people get killed. And we learn that they know “Für Elise” and “Pop Goes the Weasel.” My mind instantly went to another story where the Doctor made regular visits to someone in a elaborate prison, namely the Master in “The Sea Devils.” Certain that the song “Pop Goes the Weasel” had made an appearance in that story as well, I did some Googling, and found that I was actually remembering a moment from “Planet of the Spiders” where the Great One (empress of the Eight-Legs) mimicked Sarah Jane Smith singing the song. So there you go: clearly the Vault’s occupant is a bloodthirsty taco-eating piano-playing giant spider. Don’t tell Felicity.