Materialising in ancient Roman times, the Doctor and Donna find themselves in Pompeii and not the capital as the Time Lord might have hoped. While this is a chance for Russell T. Davies and his creative team to again show that really enjoy doing period episodes, it is the underlying story that really makes this a standout. This is a plot that will see the Doctor have to make some truly monumental decisions and give you, for the first time in this new iteration of the show, an insight into what it means to be a Time Lord and the consequences of his actions.

Again David Tennant revels in his role as the Doctor and these revelations and insights into actually being a Time Lord show how much he really is the right person to play this role.

Catherine Tate shows a more emotional side to her character, but reverts back to the screaming Donna that we encountered in ‘The Runaway Bride’ all too often in this episode. Fortunately, this doesn’t distract from what is essentially a really good Doctor Who episode. 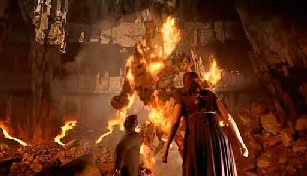 With guest appearances from Peter Capaldi as Caecillius, the Pompeian hoping to gain more social standing by using his daughter Evelina’s new gift of sight to send her to the Sybilline Sisterhood and Phil Davis as local augur Lucius, the cast really enjoys the ancient Roman setting.

In fact, you can really tell that the BBC has invested even more money in this season as the visual effects are of the highest quality. Looking like they used some of the sets constructed for their collaboration with HBO for Rome, this Pompeii definitely looks like the part. Add to this some extremely good visual effects for what is causing Mount Vesuvius to erupt (and the eruption itself) and you have an episode that is bound to become a fan favourite.

If Russell T. Davies and his creative team can keep up this momentum, then the new season of Doctor Who is just going to get better and better.