With the lovely Billie Piper leaving at the end of the last season and Catherine Tate’s Donna not wanting to join him on another adventure, the Doctor is looking for a new travelling companion and he might just have found her.

Martha Jones is the latest human to enter the TARDIS, but she has some very big shoes to fill. The good news is that Freema Agyeman makes a real effort to make them fit. Having appeared in last season’s explosive double episode finale in which she met a grizzly end at the hands of the Cybermen (the other role getting explained away here really well), Agyeman returns to the Whovian universe and gains herself a much bigger role, one that will make her a superstar.

Martha is very different than Rose. Coming from a successful family and training to become a doctor, this educated beautiful woman is a different kind of foil to the current Doctor’s persona. Where Rose made the Doctor more human by pointing out the right and wrong and bringing him back from the brink after his war with the Daleks, Martha challenges him intellectually, asking scientific questions about the wonders he presents to her.

Of course, Freema Agyeman is just as beautiful as Billie Piper, which is probably why the chemistry between Martha and the Doctor is evident even in this very first episode. 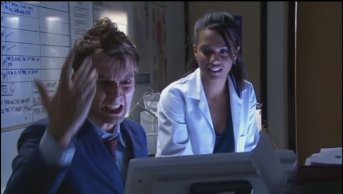 As they did with Billie Piper’s first episode, Russell T. Davies and his creative team tell the story from the point of view of the new assistant. ‘Smith and Jones’ sees trainee doctor Martha Jones have a day that will change her life forever.

Along with an invasion by rhinoceros-like creatures called the Judoon and a life-sucking shape-shifter determined to drink the essence of every intelligent human in the hospital, she has to cope with a patient she knows as John Smith, who keeps referring to himself as the Doctor.

The show gives Freema Agyeman the chance to show what she can do and that she can hold her own against David Tennant’s brilliant Doctor. We are also introduced briefly to Martha’s family, as Martha and her sister try and get their divorced parents together for a party.

‘Smith and Jones’ does a good job of introducing Martha Jones to the Doctor Who Universe. Ann Reid’s shape-shifting vampire-esque (okay — Whovian term “plasmavore”) Florence isn’t really much of a villain, but the Judoon make their presence known and hopefully will show up again. The adventure is just starting for Freema Agyeman and she is going on one hell of a ride.