As Whovians will already know, The Doctor had children before the Time War but no one would have believed that he would have another child. So whom does he have a child with? Martha? Rose? Donna? No, he actually reproduced with a machine!

The TARDIS takes them to another world, an underground world where war ravages between the Humans and the fish race, the Hath. As the death toll rises, each side uses cloning technology to produce new soldiers with combat techniques genetically engineered into their DNA. When the Doctor is forced to use this machine, a young woman, who Donna christens Jenny, leaves the pod ready to step into battle.

As the Hath attack, however, the tunnel they are in collapses and Martha is separated from the rest of the group. The Doctor realises that a power source runs the entire underground complex. Naturally, this means some running themselves as the Time Lord, Donna and Jenny head for the Source. The more time Jenny spends with her ‘father’, the more she wants to know about him. 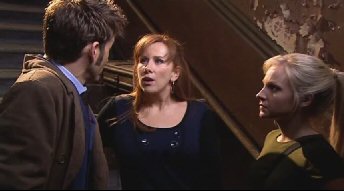 Again Russell T. Davies and his creative team have taken a fascinating premise and intermixed a message against war. The Doctor acts as peacemaker. Donna investigates a mysterious series of numbers that are scattered throughout the underground complex and Martha finds a common ground with the Human enemy. Seeing the story from both sides and then discovering the reason behind the conflict, the episode shows what war can do and how it can affect everyone involved — even the peacemaker.

The main emphasis of the show, of course, is the Doctor’s daughter Jenny. Played by Georgia Moffett, the real life daughter of former Doctor Peter Davidson, she instantly makes a real impact on the Whovian universe. Having the charm, energy and curiosity of her father, Jenny could be the next Time Lord.

Catherine Tate continues to impress as Donna and she is, against all the odds, becoming a very good companion. It is always a pleasure to see Freema Agyeman as Martha and David Tennant has become one of the best Doctors to ever grace the part.

The only real disappointment of the show is that it follows another cloning story, the two-part adventure ‘The Sontaran Stratagem/The Poison Sky’ but this aside, this is still a good show. With the introduction of The Doctor’s daughter, this is much more that just another Doctor Who war episode. The season just goes from strength to strength.