Whatever Marvel did with The Incredible Hulk, it would be most important they didn’t make us bored. They wouldn’t like us when we were bored, though even then we took Ang Lee’s Hulk to somewhere over $200 million. This time around, the introspective Lee has been replaced by the respectful and hyperkinetic Louis Leterrier, and one thing you can say about this Hulk – it’s never boring.

Admittedly, it’s occasionally silly, but to its credit rarely ridiculous. Like the first Marvel Studios production Iron Man, The Incredible Hulk puts fun first, and somehow it’s hard to shake the feeling that that’s going to tick off some fans. There’s no pleasing some people.

Even star/uncredited writer Edward Norton seems okay with having some fun. At times, his Dr. Bruce Banner acknowledges the oddity of his situation with a resigned smile. He’s had time to get used to it. In this go-round, Banner has been living with the curse for more than five years. Subtitles even fill us in on how many days he has gone without “incident.”

Leterrier and Norton wisely dispatch their version of the Hulk’s origin in the opening credits. For a lot of fans, it will look familiar, borrowing more from the television show than the comics. Regardless, everybody knows it, so finally a superhero movie dares to be quick about it, thus getting us deep into the meat of the plot.

And whether Norton or Zak Penn laid the plot out, it’s stuffed to the gills. Even as we see Banner working off the grid in Brazil, General Thunderbolt Ross (William Hurt) has a squad of Hulkbusters at the ready, waiting for the moment Banner slips and reveals his location. Meanwhile Banner communicates with the mysterious Mr. Blue via encrypted IMs, trying to find a cure for his verdant condition.

Along the way, the script weaves in the origin of The Abomination, here played by Tim Roth, and actually gives the character a motivation that doesn’t seem arbitrarily evil. At first, anyway. As part of the bigger picture for fans, clues drop that will skip around a variety of franchises. Look to 2011 for the payoff for some of the references made in this movie.

The cost of all this is that a lot of character development does have to get taken for granted. Banner’s bemusement we can understand; Betty Ross (Liv Tyler) still doesn’t get much to do but look worried with tears welling up in her eyes. For better or worse, these are cartoon characters, played sincerely and with just enough pathos to keep you interested when the not-so-jolly green giant isn’t around.

When he is around (and it’s satisfying), the Hulk still looks unreal. Though pretty complex as a visual, his scenes always seem only a step or two above the videogame tie-in. It can be forgiven when the green goliath faces down the Abomination, or when the action gets so frenetic you can’t spend time worrying about it. But in quieter moments, especially in connecting with Betty, the Hulk and the humans really don’t match up.

It’s efficient and fun, but what gives it resonance for this fanboy are the touches Leterrier throws in to show us he knows where this all comes from. In addition to a script really paying attention to the mood of writer Bruce Jones’ run on the comic book, the director nods to everything that made this possible. The soundtrack occasionally picks up echoes from the television series’ score, hauntingly sad notes that underscore Banner’s tragedy – even if this time around we don’t view it as quite as tragic.

Lou Ferrigno returns in both a physical cameo and voicing the Hulk. The cleverest and classiest touch manages to get the late Bill Bixby some screen time, an absolutely deserved tribute. Without him, the Hulk would not have vaulted into the mainstream consciousness so firmly. 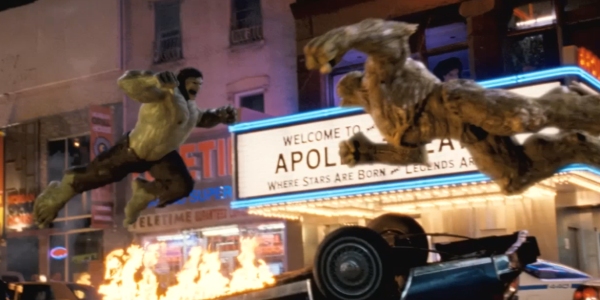 Some might not be able to forgive the moments that feel like a comic book, but that’s what makes this movie work so well. It’s unabashedly taken from some of Marvel’s most vivid moments, and though it is hokey to have a character say “…that would be some kind of abomination…” to name the villain, it’s not like this has been adapted from Dosteovsky.