Gone are the killer robot Santa Clauses, only to be replaced by something even more bizarre. “The End of Time: Part One” tries to avoid being another campy Christmas Who special by exploring the darker story of the Master’s return and the impending doom surrounding both the Doctor and humanity.

Russell T. Davies leaves very little time for lollygagging around the Christmas tree in his penultimate episode. The first half of the Tennant-Davies finale begins like the epic story Davies had promised fans, with an ominous voice (Timothy Dalton) talking about the bad dreams that plagued humanity in the final days of planet Earth, followed by a familiar maniacal cackle and sepia-toned face. Unfortunately, the Narrator’s attempt to put the episode on a grand scale is hurt by its overly labored storyline.

The Doctor, dressed in a silly “holiday in Hawaii or some other tropical planet” outfit, is barely out of his TARDIS before he once again encounters Ood Sigma and learns that the End of Time prophecy involves something much darker than the inevitable return of the Master. 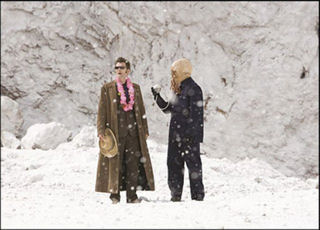 Cut to Lucy Saxon, the Master’s wife and murderer, being taken out of her prison cell by a warden and prison guards who reveal themselves to be part of an underground cult following the Book of Saxon. The idea of the Master’s very own cult may be too absurd for some, and the entire resurrection scene plus Lucy’s ultimate betrayal seems very over-the-top and a little too convenient for the plot. Thankfully, that scene goes by quickly, so that we can almost forget it ever happened and just enjoy watching John Simms get back into his role as the Master. Erm, sort of.

Due to a resurrection mishap, the Master’s insanity has increased ten-fold, and Simms has a field day chewing up the scenery, a hamburger, roasted turkey, and a smattering of human beings. The Master also gains superpowers that allow him to jump really far and shoot electricity out of his hands, for no discernable reason other than to trick viewers into thinking they are watching an episode of Heroes — which, if you’ve been bothering to follow Heroes, is a really bad thing.

But again, just enjoy John Simms. Amid all that silliness there is still something sinister and disturbing hiding behind the Master’s constant smirk.

Another much-anticipated return is Bernard Cribbins as Wilfred Mott, Donna Noble’s ever-hopeful, star-gazing grandfather. He does delightfully well in fulfilling the role of the Doctor’s companion, providing the episode with some obligatory jolly Christmas cheer. However, we find him still trying to cope with the tragedy of Donna from the end of Season Four. One of the episode’s most poignant moments is with the Doctor and Wilf conversing about death in the café. The grief in Cribbins’ eyes as he desperately pleads the Doctor to just say hello to Donna is heart-breaking enough to give Tennant’s own sad eyes a run for their money.

Despite its many questionable plot points and overcrowded narrative, “The End of Time: Part One” does succeed in establishing everything Davies wants us to know before the grand finale. Davies’ trademark cliffhanger ending to the penultimate episode reveals that the Master’s plan to obliterate humanity is actually part of some grander design, a design that will bring the return of something unforeseen by both the Master and the Doctor. 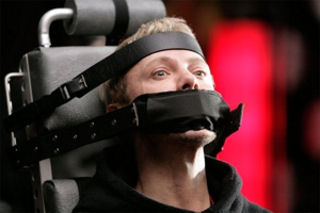 We only get a peek at what is to come in the finale, and it may be enough to get us incredibly excited for Part Two—that is, if we weren’t already planning our lives around watching David Tennant’s last Doctor Who episode on January 2 (BBC Americans still have to wait a long 24 hours, sigh). With all the exposition taken care of in the first half, “The End of Time: Part Two” should have plenty of room to be the brilliant epic adventure that we have been waiting an entire year to see.

Back in the Doctor Who panel for Comic-Con 2009, Russell T. Davies, David Tennant, producer Julie Gardner, and director Euros Lyn warned us all of the dreadfully fearsome and traumatic ending that is to come for our dear Tenth Doctor. Let’s hope the final episode lives up to all their promises on New Year’s Day. But no matter what happens, it is certain that 2010 will be starting off with piles of empty tissue boxes and a brand new Doctor in the TARDIS.