I have adored Sherlock Holmes for as long as I can remember. Well, since high school when I finally read his adventures by Sir Arthur Conan Doyle. Holmes has since become one of my heroes. As a “Sherlockian” (as others would dub me; I find the title slightly horrifying, personally), I am generally hesitant to explore other works that involve the great consulting detective.

But it is at times such as when I’m faced with a Laurie R. King novel or a new film adaptation, that I must remind myself that Doyle himself once told an actor who wished to change aspects of the first Sherlock Holmes play script, “You may marry him, murder him, or do anything you like to him,” and then I eagerly dive into that novel or film.

When I first heard of Guy Ritchie’s take, I was surprised it was even happening. Until that point, Holmes had been tucked away mainly on television shows in the 1950s, ‘60s, and ‘80s, or made for T.V. movies on BBC. It had been a long time since he had been seen on the silver screen. I was excited and terrified all at once.

After several months of fretting, I finally saw the trailer. And my heart shattered. What I saw in the brief, three-minute concoction left me with the impression that my hero was being mocked in the worst way: he appeared to be a comic book superhero. But still I promised I would give it the benefit of the doubt and watch it anyway. 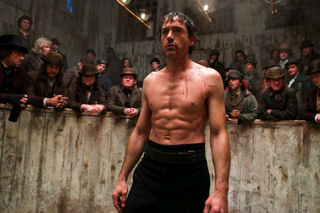 There are many “Sherlockians” out there in the world who have already judged the movie as “terrible,” “horrible,” and “quite possibly the worst Holmes film to date” without seeing anything more than the trailer. They have complained against the bare-chested boxing match against McMurdo, against the explosions, against everything, really.

What they refuse to remember from Doyle’s work is that Holmes was, in fact, a skilled boxer who knew several different disciplines of unarmed combat. Buildings and items did indeed explode, especially after Watson, or perhaps Lestrade, unwittingly tripped the switch. The only thing in the film that wasn’t in the stories or novels is the somewhat romantic relationship Holmes had with Irene Adler (Rachel McAdams). But again, Doyle said, “You may marry him…” The biggest complaint I have found while browsing through online message boards is against the supernatural elements in the film. Lord Blackwood (Mark Strong) is portrayed as a dealer in black magic and suchlike. During Queen Victoria’s reign, there was a substantial rise in the interest in spiritualism, mysticism, and belief in the occult.

Doyle was one of many swept up and away by it, and in The Hound of the Baskervilles, the title character is described as a gigantic beast of a hound with fire spewing from its mouth. Of course, even this supernatural aspect was later revealed to have a scientific and logical explanation.

The film begins mid-case with Holmes (Robert Downey, Jr.) and Watson (Jude Law) chasing down the perpetrator of several ritualistic murders in London. Holmes is on foot, Watson just behind him in a hansom cab with Inspector Lestrade (Eddie Marsan) and several other officers of Scotland Yard. The chase soon enters an underground temple of sorts, complete with multiple, unadorned pillars and a long, descending staircase. 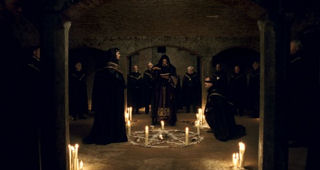 Once inside the building, Holmes comes across a bowler-hatted thug, a lowly henchman, and while Holmes hides behind a pillar, the audience is greeted with a fantastic surprise — Holmes strategizing the best way to take down the thug without killing him, based on any observations he made in the few, precious moments he had seen him. It is done as a voice-over, which has not been utilized in any Holmes film I’ve ever come across. It was a welcome addition to the film, as it was a concise and interesting method of showing a bit of how Holmes’ mind works, which has rarely been delved into, even by Doyle. The same technique is used later in the film during the bare-chested boxing match against McMurdo. It’s certainly something I hope they will continue to utilize, should they be given the opportunity to film more Holmes films; it works very well.

What I found interesting about the film was the three interweaving storylines that were present. Not only does the film focus on the case with Lord Blackwood, but it also allows room for focus on Holmes’ relationship with Watson, which appears to be hanging by a thread, and a second subplot with Adler and the mysterious “professor” for whom she works.

To see Holmes and Watson disagreeing about Watson’s coming engagement with Miss Mary Morstan (Kelly Reilly) was incredibly amusing, to say the least. Holmes’ disdain for the gentler emotions is evident in all the things he does in an attempt to sabotage Watson’s efforts to introduce his love to his best friend or to find the perfect engagement ring. 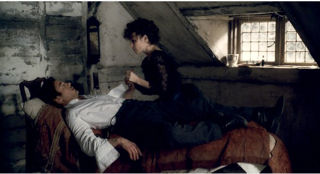 The relationship Holmes has with Adler in Doyle’s works has nothing romantic to it. However, it worked well in the film to give them a more romantic relationship as it added more dimension to the relationship as well as more tension between the two characters which was rather enjoyable to watch on screen. It not only creates tension between Holmes and Adler when they are working together on the case, but again, Holmes can only trust her half the time he is with her because he is not entirely sure whose side she is on. She’d just as soon kiss him as drug him, strip him and handcuff him to her bed, leaving him for the chambermaid to find. As a Holmes devotee, I went into the film nervous, praying my hero wouldn’t be made the fool. I left pleasantly surprised and even gleeful when at one point, Downey Jr. had a line lifted straight from “A Scandal in Bohemia.” Frankly, the only aspect of the film I didn’t care for was Downey Jr.’s accent, as it kept shifting and changing. But everything else considered, I think I can forgive him for that.

Ultimately, it’s as Holmes himself says, “It is a capital mistake to theorize before one has data. Insensibly one begins to twist facts to suit theories, instead of theories to suit facts.”