The world is a stage but in the world of Doctor Who, time plays a great factor and the TARDIS gives Russell T. Davies and his creative team the chance to take the series anywhere. For ‘The Shakespeare Code’ they do just that as we witness the Doctor and Martha travel back to 1599 and to visit the Bard himself, William Shakespeare.

Of course, the Doctor’s plan of taking Martha back in time to watch a play by the greatest playwright of all time doesn’t go smoothly as the pair soon become entwined in an adventure that could see the world ending and creatures from the dawn of time taking over the Earth.

Writer Gareth Roberts really has fun with the episode, getting to create a Shakespeare that we have never seen before and one that could easily become a hero for the ages. Played with great wit and aplomb by Dean Lennox Kelly, best known for his performances in the cult Channel 4 comedy ‘Shameless’, this Shakespeare is more than a match for David Tennant’s Doctor, just as clever and just as funny.

The script cleverly works in many a nod to his plays as well, showing were he might have got many of his influences from and the Doctor and Martha inadvertently dropping many of his more famous lines into their conversations, with Shakespeare saying ‘I might use that’. 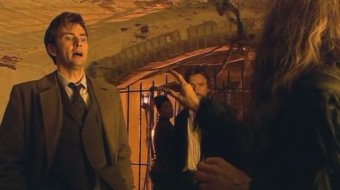 The set design, the visual effects and using the actual Globe Theatre help make this one of the best looking Doctor Who episodes since the series returned. Add to this good performances from Christina Cole and her fellow witches as the villains of the piece and Freema Agyeman continuing to grow into the role of the increasingly sexy Martha Jones and you have an episode that fans should really enjoy.

‘The Shakespeare Code’ is another example of how good Doctor Who can be and sets a very high standard for the new season.