After gaining cult status with their last movie, Shaun of the Dead, the anticipation for Edgar Wright and Simon Pegg’s latest was bound to be huge. That was a massive fan favourite and a critical success all over the world and following that up was always going to be difficult. Instead of simply going down the horror path again, Wright and Pegg have chosen another genre to pay homage. This time around they take us into big bang, gun wielding, all out Hollywood style action, but set it in the West Country of England.

The premise is simple. A big city cop, the best in the business, is reassigned to a sleepy town for being too good and showing up his fellow officers. When he gets there he finds it hard to switch off his policing skills and settle down to country life, looking for crime at every turn and every accident.

When he thinks a recent spate of accidents could actually be murders, he can’t help but investigate. That is the story and a brilliant way of building a plot that enables co-writers Edgar Wright and Simon Pegg to pay homage to their favourite action movies. 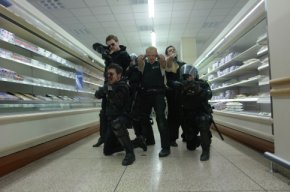 Of course, as they did with their earlier film, the writing duo mix in a large amount of comedy into the script and create characters that are both memorable and outstandingly realised. Pegg’s Nicholas Angel is your typical hardnosed cop who basically lives and breathes the law. An expert in every facet of policing, he is a super cop. Pegg plays him with great skill and extremely straight, as you’d expect for a man so dedicated to his work.

His partner Danny is wonderfully played by Nick Frost. A complete change from Ed in Shaun of the Dead, Danny is an instantly loveable character whose sweet nature and obsession with Nicholas’ career make him a firm favourite from the outset.

Paddy Considine and Rafe Spall are extremely funny as Sandford’s detectives who constantly take the mickey out of Nicholas and Danny. Jim Broadbent is also exceptional as Inspector Frank Butterman, the small town chief how doesn’t believe that anything could happen in his small town. When you add in eye-catching performances from Timothy Dalton as supermarket owner Simon Skinner, Edward Woodward as Neighbourhood Watch leader Tom Weaver, Bill Bailey as Sergeant Turner and Olivia Colman as PC Doris Thatcher. Throw in cameos by Steve Coogan, Bill Nighy, Martin Freeman and many more, you have a brilliant cast bringing to life these great characters. 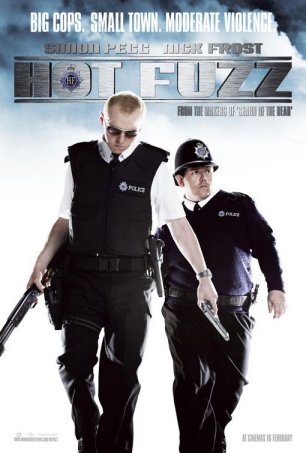 There are huge nods to Bad Boys II and Point Break, as well as all the other clichés that big Hollywood action movies have stuck to since the 80s. The absolutely astonishingly good, action packed finale has everything and shows that Edgar Wright is a talented director that is just at home with comedy, horror and action and could probably turn his had to anything.

With great characters, an engaging story and a finale that will be considered a classic not just in comedy but in action movies as well, Hot Fuzz is destined to become a cult classic. Edgar Wright and Simon Pegg are the shining lights of the British film industry and this film will push them to even greater heights.