One of the most beloved writers and one that British television and Hollywood have an obsession with adapting, this story is set 1926 before she invented her second most famous character Miss Marple, or wrote some of her classics like ‘The Mirror Crack’d’, ‘Murder on the Orient Express’ or ‘Death on the Nile’ and the writing team play on this with Donna. Bringing the beloved writer to life is an excellent performance from Fenella Woolgar, probably best known for her roles in ‘Bright Young Things’ and ‘Vera Drake’ and this is one that will make her a favourite ‘Doctor Who’ version of a real life character.

Writer Gareth Roberts, who also wrote ‘Only Human’ and ‘I Am Dalek’, creates a script that is, as you’d expect, like an Agatha Christie story with the Doctor playing the investigating officer and Donna as his plucky assistant. With assistance from Christie, the pair looks for the clues and make their conclusions about the case, with “…the butler did it” on everyone’s lips. With this being Doctor Who, however, you know that there is going to be an alien influence. 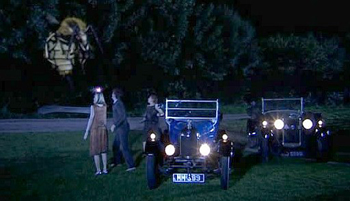 As with any murder mystery you need your suspects in a stately home and we have some good casting. Anybody who remembers the BBC classic comedy ‘The Good Life’ will have a soft spot for Felicity Kendal. As Lady Clemency Eddison, she has her own secrets about the past, but is she the murderer? The same can be said about Felicity Jones as Robina Redmond, Christopher Benjamin as Colonel Hugh, Tom Goodman-Hill as Reverend Golightly, Ian Barritt as Professor Peach and the rest of the cast, who all have pasts that Agatha, the Doctor and Donna will discover.

‘The Unicorn and the Wasp’ is an entertaining episode that is a lot fun and tries to uncover why and how Agatha Christie, in real life, disappeared for 10 days. With another fine and amusing performance from Catherine Tate and David Tennant as good as ever, this is another episode that fans will enjoy.