Ever since Russell T. Davies brought Doctor Who back to the small screen, fans young and old have been scared out of their wits by the episodes written by Steven Moffat. Everyone will remember the chilling question “Are you my Mummy?” from ‘The Empty Child/The Doctor Dances, the clockwork robots of ‘The Girl in the Fireplace’ and making statues truly terrifying in the brilliant ‘Blink.’

But before he headed to the Whovian universe, Steven Moffat was better know for writing the UK comedy hit ‘Coupling’. Little did we know he would become a tremendous science fiction horror writer, who could send a chill through the oldest and youngest fans of the classic show.

For his latest Doctor Who adventure, the writer takes Donna and the Time Lord to the 51st Century and a visit to the largest library in the Universe, but when they arrive they find the planet filled with every book ever printed completely empty. Of course this mystery intrigues the Doctor and he and Donna are soon on the case. 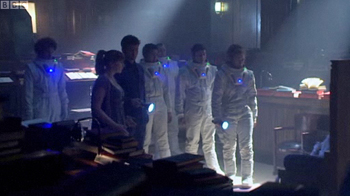 Their investigations are interrupted by the arrival of Professor River Song and her archaeological team, here to see what has happened on the planet. Joining forces, the Doctor discovers that the library has been invaded by the Vashta Nerada, a species that comes out of the darkness of shadows and consumes any living thing that is unlucky enough to fall into its trap. But there is much more to this investigation than he first thought, and they have to survive while trying to discover what is going on.

As with all Doctor Who two-parters, the tension and the peril builds in ‘Silence in the Library’ and in ‘Forest of the Dead’ reveals what is going on, but throws in something that could affect the Doctor in the future. This comes in the space of Professor River Song, played by former ER actress Alex Kingston.

The character reveals that she knows the Doctor, but the 10th regeneration of the Time Lord says he has never met her. She has met him, but it is not the current version of him or a past but a future, much older version. River claims they were closer than close and proves it with a (frustratingly unheard) word. 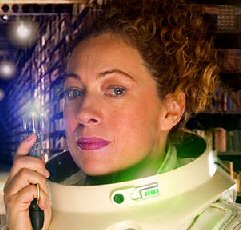 Moffat and the rest of the Doctor Who team instantly create an intriguing character and one that could reveal every adventure to come, as she carries a diary full of ‘spoilers’ about the Doctor’s future and a secret that could have tragic consequences for someone very close to him.

With action, a twisting turning plot and another level of horror that will make kids, and some adults, hide behind their cushions, this is another great pair of episodes from future Doctor Who show runner Steven Moffat. Revel in this excellent two-parter, and know that the Doctor is in safe hands.