Since Russell T. Davies brought Doctor Who back to television, we have known that the Doctor was the only Time Lord left in the universe as a result of the Time War with the Daleks. After the Face of Boe revealed the Doctor wasn’t alone in ‘Gridlock’, Whovians knew something dramatic was going to happen as the series progressed.

Early in the season, the introduction of the Harold Saxon character, a presence that seemed to be influencing Martha’s time and the opinions of her mother, made you take notice of this continuing plotline. Now we arrive at the finale and after the Master returned at the end of ‘Utopia’ we get to see the Doctor’s nemesis and rival in full flow.

British actor John Simm, best known for his role in the critically acclaimed hit TV show Life on Mars, throws himself into the role of the evil Time Lord bent on universal domination. In an almost pantomime-like performance in parts, he switches from the joker of the pack to down right vindictive in a single bound, as the Master releases the Toclafane onto the Earth to eliminate ten percent of the planet’s population to keep them in line. Simm plays the role with great gusto, modernising the character but keeping the mythos that has made the Master such a firm favourite in the Doctor Who universe. 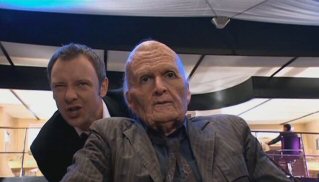 Martha Jones gets the chance to step up and save the day, as she escapes from the flying aircraft carrier HMS Valiant to start the resistance against the Master and his army. Freema Agyeman has grown throughout the season into the role of the Doctor’s latest assistant, proving that she is not just an extremely pretty face and can almost fill the shoes left by Billie Piper as Rose Tyler. John Barrowman clearly revels in the role of Captain Jack Harkness in the more family friendly version of the character he portrays in Torchwood.

The finale finally reveals more about Captain Jack’s immortality and answers many of the questions both Whovians and Torchwood fans have been clambering for since ‘The Parting of the Ways’. There is also good support from Alexandra Moen as Harold Saxon’s wife Lucy, Adjoa Andoh as Martha’s mother Francine and Tom Ellis as resistance fighter Thomas Milligan. 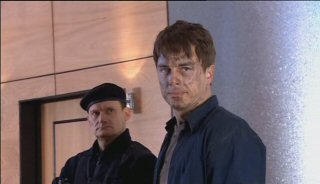 However, the finale of the season isn’t perfect. With most of the emphasis switching to the Master and Martha, this comes at the detriment of the star of the series, the Doctor himself. David Tennant is reduced to a supporting character for most of ‘Last of the Time Lords’, not even appearing on screen for most of the episode after the Master reduces him to an extremely old man (an excellent CGI character, especially for television).

The episode seems to lose something with his presence and even the final scenes don’t make up for the shortcomings of the show. There are also a lot of unanswered questions that may be coming in the next season, but fans who have waited all season for all the big reveals might be a little disappointed.

These shortcomings aside, the latest season of Doctor Who concludes and shows that excellent science fiction is fantastic for creating characters, amazing worlds and storylines that can enthrall, mesmerise and even scare you (just watch ‘Blink’). What will the next season bring?