If I could talk to the animals, I’d ask them if they could give better studio notes. Because for all that Dolittle does right — and it does more often than you think — it’s clear that many hands stirred the pot, many test screenings unsettled executives, and many solutions did not add up to one cohesive movie.

The basic idea should work, a high concept that has charmed children for almost a century. John Dolittle (Robert Downey, Jr.) talks to animals, and thus becomes far more interested in being a veterinarian non pareil than being a medical doctor for humans. Writer/director Stephen Gaghan’s script embellishes a bit from author Hugh Lofting’s original books, resisting the temptation to be an origin story.

Instead, an animated prologue establishes that we’re about to see an older Dolittle, one who has retreated from the world in grief from the loss of his beloved wife. Just as in Up, it’s clearly up to a young boy to open Dolittle’s heart up again, although he has been taking solace in his adopted family of quirky celebrity-voiced animals. But either through scripting or editing, Tommy Stubbins (Harry Collett) takes a while to develop, an animal lover from a family of hunters who never interact with any depth.

Tommy also has to compete with Lady Rose (Carmel Laniado) for adorable child sidekick – luckily, her allegiance is to the Crown, and not quite the Doctor. Still, both have to spend a lot of time looking on in amazed wonderment at a bevy of CG animals of varying believability. Rose has skin so shiny and eyes so big that in several scenes, it’s quite possible she’s CG herself.

There’s a call to adventure, a plot to kill the young Queen Victoria (Jessie Buckley), and dazzling villains to oppose the good Dr. Dolittle has he finds himself again. The elements aren’t bad; the movie just never falls into agreement about what it’s going to be. 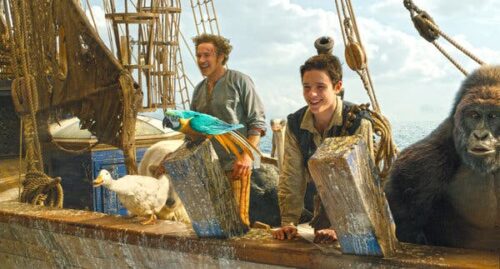 As a family film, the plot sort of works. But Gaghan also seemed to have a hard time directing some sequences, so narrator Polly the Parrot (Emma Thompson) takes over and explains what happened. It’s obvious in what could have/should have been an exciting set piece with Dolittle and Stubbins sneaking into an island kingdom of thieves. Instead of smooth action, it’s just glimpses while Polly talks.

It’s also hard to set an acting level. Downey reaches back to his days as Chaplin, pulling out bits of physical comedy he hasn’t had to do in years, and it’s welcome. But he’s also strangely underplaying Dolittle, a straight man when he could have been very fun opposite the manic Michael Sheen as his arch-rival, Dr. Blair Müdfly (sorry, one of my favorite jokes is the wounded pride of an umlaut). Thus Downey’s Welsh-Irish-Middlebury-Muddlebury accent gets lost against the celebrity voices — all of whom speak in their native accents, and work hard to be recognizable (except, perhaps Tom Holland, who doesn’t quite fit as an intellectual but fierce dog).

Whoever took over from Gaghan — and that, too, clearly happened — also didn’t have the courage to just lean into a period fantasy. It’s sort of early Victorian, but the dialogue slips in modern vernacular to keep the tweens more interested. It’s frigging annoying. And, of course, Hollywood law does dictate that any live-action children’s movie made in the last 30 years must contain plenty of breaking wind japes, whether it disturbs the dignity of a dragon or not. 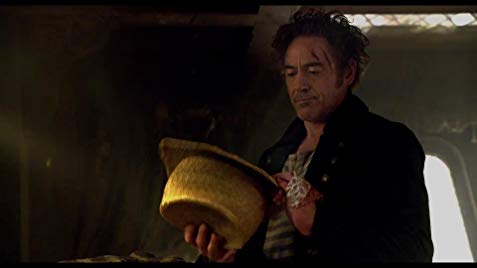 Which leads back to the celebrities — like the earlier Eddie Murphy Dr. Dolittle, those celebrity voices provide plenty of punchlines that just come out of nowhere and often look edited in later. Kumail Nunjiani as a flustered ostrich works well, but Jason Mantzoukas sticks out as a dragonfly playing out scenes from…The Godfather. (Hey, it worked for Zootopia…)

However, Craig Robinson voicing out his own little sideplot as a vengeance-obsessed squirrel who may think he’s Captain Kirk sort of works, if we stretch it and remember that Kirk is sort of Horatio Hornblower.

Dolittle works the kids, despite its out of place sass. And there are moments of fun with Sheen and cleverness involving whale power. But for a movie featuring a gorilla (Rami Malek) trying to overcome his fear, it’s a shame that Dolittle lacks the courage to just tell the story of the adventures of Doctor Dolittle.