Five young adults go for a weekend getaway to a remote cabin in the woods. No one knows they’re there. What could go wrong? With Roshi Entertainment’s production of Evil Dead the Musical HD, pretty much nothing. Well, to paraphrase Evil Dead hero Ash Williams, mostly nothing. Things don’t turn out so well for the actual young adults, but the audience has a GREAT time.

The show, based of course on the classic film franchise, has been around for a while. But this touring production gives it a new twist — computer generated sets and animation to bridge some gaps. While high tech may pique your interest, it’s still the cleverness and the precision of good old reliable stagecraft that keeps the show humming.

It’s easy to take the subject matter, camp it up, and have fun. But it’s harder to be clever about it, and director/mastermind/occasional Ash Williams Matty Gregg has made this a smart production. It’s not just that the audience is in on the joke when an evil tree doubles as stage crew; it’s that everybody in this is so damned committed even when a Deadite mask is obviously a mask, or a pun is particularly painful. 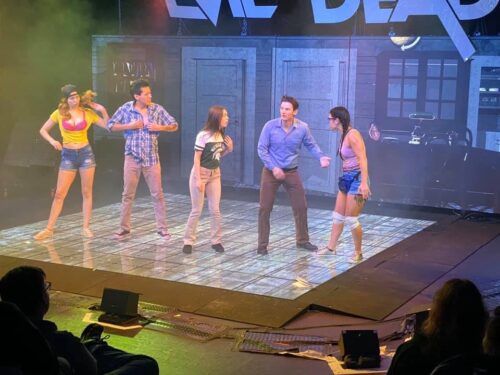 And when the music starts, it’s not just the heartfelt singing — complex choreography supports the mayhem without causing any masks to slip. Zanna Wyant does triple duty, choreographing and playing two roles onstage. In Gregg’s staging, Evil Dead the Musical is smart when you least expect it, and stupid exactly when you want it to be. And that’s a good thing.

You’d think that virtual sets would make this a bloodless affair. Certainly, CG blood splatters cleanly exactly where he needs it to go on the walls of his perfect recreation of the infamous cabin in the woods. But the cast gleefully squibs “blood” out on the audience (seats in the splatter zone cost extra) when Deadites get blasted by Ash’s boomstick. If that’s not enough to be fully immersive, they’re happy to also pump it out from canisters or dump it from eco friendly water bottles directly on the front row. (To be safe, all the seats at San Jose Stage were wrapped in plastic.)

All in all, this is a fun night of theater that also pushes the boundaries of what can be done in a small theater. As many big touring companies have been playing with projection mapping and video screens to provide grand scope, Gregg proves that size doesn’t matter. With video, an audience can be immersed anywhere… even in a cabin in the woods. 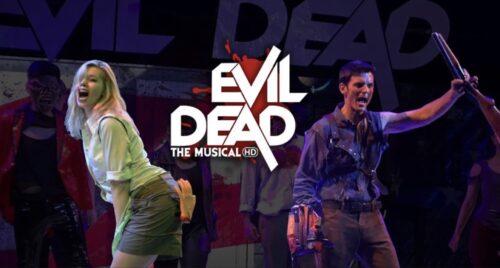 Evil Dead the Musical HD wrapped up in San Jose, but currently has dates scheduled for Chicago, Austin, and Seattle. But if we’ve learned one thing about the Evil Dead, it’s that it always comes back. I can’t wait.

(Also, we’ve got a podcast interview with Matty Gregg and co-star/evil tree/production manager Henri Boulanger — watch for it on Fanboy Planet soon!)

All photos courtesy of and copyright Roshi Entertainment