A few months ago, occasional Fanboy Planet contributor Jason Sacks turned in an interview with legendary writer Harlan Ellison. The occasion? Clifford Meth, a friend of Ellison, dedicating the proceeds from his next collection of short stories and essays to Ellison’s battle against AOL. Before that book could be released, it appeared that Harlan Ellison won his battle, but not the war. Briefly, somebody posted an Ellison story on an AOL bulletin board, and the author sued AOL for its responsibility to make sure that they did not facilitate internet piracy. A judge found in Ellison’s favor, and he has now started the KICK Internet Piracy Fund to take the fight for creators’ rights further.

So now, that book, god’s 15 minutes, is about to see release from Aardwolf Publishing in April, with the proceeds going to KICK. And we’ve been doing our small part to help Clifford Meth publicize another shame in the creators’ rights fight: the plight of comic book creator Dave Cockrum.

Earlier this week, Cliff contacted me to give me a brief update on Cockrum’s condition, and then reminded me that he had this book coming out and had forgotten to promote it. Heck, the guy has already proven his loyalty and great integrity in this industry. I had no problem indulging him in a little vanity. I’ve never met him face to face, but I am grateful for the chance to tout his work.

Cliff Meth: You may recall 60s pop artist Andy Warhol’s pithy statement that in the future everyone will get their 15 minutes of fame. Most of us believe that 15 minutes comes when you appear on television, in a crowd scene or being interviewed for your political point of view, as if anyone cared.

Well, in view of the televised insanity we see practiced in the name of various deities—madmen flying 747s into buildings and blowing themselves up on crowded buses—I though, hmm, how clever; god’s 15 minutes.

DM: To be blunt, why should the casual reader pick up this book?

CM: For starters, it’s the only book that comes with a guaranteed-satisfaction or money-back refund. Really. Aardwolf Publishing has that much confidence that readers will love it. The content is mature—not to imply that it’s sexually beyond the PG limits, although it very well might be. But I’ve always aimed at the thoughtful reader; the reader who is capable of digesting more than action and low humor.

The book is essentially a collection of short stories that run the gamut of science fiction, horror, and dark fiction, and they’re illustrated by the legends of comic art, including Gene Colan, Joe Kubert, Marie Severin, George Perez, Herb Trimpe, Dave Cockrum, Mike Ploog, Joe Sinnott. Personally, I’d buy a book that even one of them were involved with. 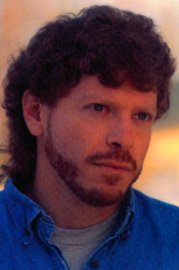 DM: What can they expect to find within its pages?

CM: As I said, god’s 15 minutes is illustrated fiction for clever readers who like dangerous stories. I’ve been compared in recent reviews to Quentin Tarantino, which is ridiculous because I’m much better looking. Let’s just say these stories are from the dark side—they’re little troublemakers looking for a place to unfurl.

DM: If forced to, how would you describe your own work?

CM: As honest, and sometimes angry. I mean it’s not all one thing, so it’s hard to pin down. I suspect that readers who like Ellison or Vonnegut or Bukowsky will find that it resonates with them.

DM: The proceeds from god’s 15 minutes, or at least some of them, will go to Harlan Ellison’s KICK fund. I’d say that your work on the Dave Cockrum tribute book ties in to that same urge for creators’ rights. Would you care to eloquently make a statement about that for Fanboy Planet readers?

CM: It’s the KICK Internet Piracy Fund actually. It’s probably not coincidental that these two projects are floating back-to-back. I am an enormous believer in creator’s rights, in artist’s and musician’s rights, and have participated in these types of projects before. But really, it comes down to friendship. 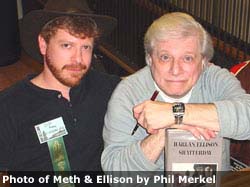 I’d rather not do a song-and-dance for you about the rights of the proletariat or the evils of Big Corporations. I do think it’s a shame and an embarrassment in this day and age that a man like Dave Cockrum, whose characters created an empire, is currently worrying about how to pay his medical bills and buy groceries.

As for Ellison, the man is my friend and I believe in his cause, so helping him in any way I can just fits with the way I live. When a pal of mine is in a fight, I see it as my fight, too.

DM: How are things going on the Dave Cockrum book, by the way?

CM: The Uncanny Dave Cockrum Tribute has new contributors each day. This will be a who’s who of the comics industry—a truly exceptional book.

DM: You’re an Orthodox Jew. How much has your faith affected your work, and in what ways?

CM: I’m a rather unorthodox Jew, too. And I’m an American. And a white man. And fairly short. We’re all sum totals of our experiences, our bloodlines, our special twisted eugenics—the metaphysical state of being in a certain place at a certain time. I don’t think it would be fair to point to something I’ve written and say, “Oh, well that’s where we see the Jewish soul peeking through.” Of course, others might say it.

DM: In Jason Sacks’ interview with Harlan Ellison, Ellison described an incident in which you “…went Bruce Lee on (the) asses” of people who had said some pretty bigoted things. Do you do that often?

CM: No. I’ve had my fair share of fights because I’m predisposed to attracting certain types of people, I suspect, and I have a ferocious antipathy to bullies. Much of this is the product of a misspent youth, reading Batman and Captain America.

But I find the circles I walk in these days don’t typically bring me into physical confrontations. I competed in the ring for many years, so my reaction to the threat of violence is somewhat different than the average guy on the street, whose initial reaction to danger is to run. When someone threatens me, they wake up with a crowd around them.

DM: Let’s delve a little into your background, since I think a lot of the people that come to Fanboy Planet are somewhat new to the scene. You spent time writing for fanzines before going pro. How has fandom changed since you were on that side of it?

CM: The only real difference I see now are that the opportunities for fans are greater. When I was growing up in the late Sixties and early-mid Seventies, we had conventions and photo-copied fanzines, and that was about it. That’s how we communicated and participated in comics fandom. The introduction of the Internet changed all that overnight. Now, there’s message boards, webzines, and so forth. Anybody can e-publish their own stories or art or reviews or what have you just by uploading it to their own free little site. Anyone can blog. It’s quite amazing.

DM: What’s one of your most treasured memories of working on the fan side of things?

CM: I suppose it was getting published. At 15 and 16, I was already seeing my stories set down in somebody else’s books—places like AFTA and No Sex and SF & Fantasy Verse. This was enormously encouraging. I was meeting artists and writers who were already further down the road that I wanted to travel, and some of them became life-long friends. Bill Messner-Loebs comes to mind.

It was just a very exciting time. And creators were much more accessible. What a thrill it was to meet guys like Dave Cockrum and George Perez and have them sketch for me. Who knew that two decades later I’d be working with them?

DM: What do you think the comic book industry could be doing to keep itself vital?

CM: That’s a tough call, friend. If I knew, I’d be selling the idea. Vital as opposed to irrelevant? Well, that sort of says it all, doesn’t it? Stay relevant. We must all stay relevant. Being derivative has led the industry as a whole—if there is such a thing—into a state of diminishing returns. We’re down to one distributor, a third of the retailers we had a decade ago, and sales of books are one-tenth of what they were. Scary stuff! So relevance is the answer.

DM: What do you dig in today’s pop culture?

CM: Every generation has innovators. I’m not one of those, you know—Dads, I guess—who get stuck in that my-generation trap. I mean the golden age to all of us is the time when we first discovered the genre, whether its comics or art or whatever, but there’s this wealth of innovation that comes from each generation, each sub-genre. I grew up on The Beatles, The Who, The Doors, Led Zeppelin, but I’m a great fan of much of today’s music. I love the Chili Peppers…

As for comics? I think Jeph Loeb’s stuff is as good as anything I’ve ever read. Pop culture? The films are getting better and better. Peter Jackson is more important than Tolkien in my opinion. Jet Li is better than Bruce Lee.