A few years ago, Glen David Gold made a splash in the publishing world with the oft-touted on Fanboy Planet novel Carter Beats the Devil. A wild adventure that combines history, politics and the fictionalized life story of one of the world’s greatest stage magicians, the book was snatched up by Tom Cruise for a potential film adaptation. You know how that goes. Really, it would make a terrific movie, with or without Cruise.

But that’s not why we’re here. Recently, Gold’s peer, pal, and Pulitzer Prize winner Michael Chabon offered Gold a writer’s slot on his latest project: Dark Horse Comics’ Michael Chabon Presents: The Amazing Adventures of the Escapist, based upon characters from Chabon’s The Amazing Adventures of Kavalier and Clay. In itself, that’s not amazing. However, Gold got to work with one of the giants of the comics industry, Gene Colan. Not bad for a guy taking his first shot at writing comics.

Their story appears in the second issue, now on sale, but not quite evenly distributed to comics shops everywhere.

After writing Fanboy Planet an email promising to deliver a great story for the book, Gold also offered to answer some questions. As we’re fans here, we jumped on the chance. And so, fanboys and fanwomen, Glen David Gold…

Derek McCaw: How did you get involved in this project?

Glen David Gold: Ten years ago, I went to a reading Michael Chabon gave in Berkeley — Wonder Boys. While he was in the middle of signing my copy, I said, “Last week I was standing in Roz Kirby’s living room,” and he slammed the book shut, stared at me, and said, “How did you know I liked comic books?” 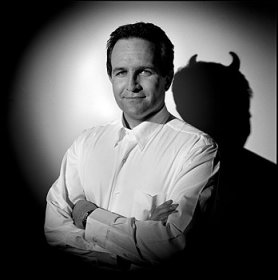 In 2000, when I sent Michael galleys of Carter to read, he sent me a copy of AAofK&C, which was just about to come out, and I believe there was some mutual recognition. “Oh, yeah, you REALLY like comics.” And magic. And history. And stories in which things actually happen. So I believe that when Dark Horse made The Escapist happen, Michael had me as one of a few writers in the back of his mind who might have an interest in doing something like this.

Oh, and I brought him my copy of Wonder Boys in 2001, and he did finish signing it then.

DM: Were you assigned Gene Colan as artist ahead of time, and either way, what was your reaction upon hearing that you would be working with Gene Colan?

Gene is my man. I love his stuff. I loved it when I was a kid (who else drew like he did? You know modern comics better than I do — does anyone these days draw in “the Colan school”?). He did an amazing Captain America, an amazing Daredevil, and (as you can tell) his Howard strikes me as definitive. 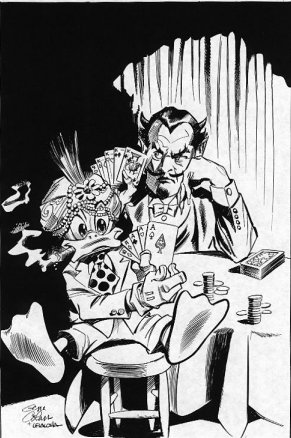 I asked the editors at Dark Horse if they could get Colan to draw the story, and about an hour later, I got an email from Gene saying he’d be delighted. Which terrified me. Now I had to try to write something good. I think he did an amazing job. How he does that light-and-shadow thing is unreal.

DM: What parameters were you given for your Escapist story?

GDG: There was an extended origin sequence from AAofK&C and a history of the character’s corporate travails over the years. That was it. I asked if they’d done a femme fatale yet, and it was early enough in the game that no one had.

Pretty much complete freedom. I turned in an outline for a ten-page story which they liked enough to ask if it could be 20 pages. Or it was more like *I* thought it was ten pages and they knew better.

They suggested a full script, but I thought that telling Gene where to put the camera was like letting the usher direct the film. So I wrote a page-by-page outline, and he did his thing, and then I went back and dialogued it. The only editorial hoo-hah came after it was done — Diana had a question for me about something erroneous I’d written and rather than admit she was right and I was wrong, I started rambling out an essay-style retroactive continuity dodge over the phone. She suggested I write it up and she thought it was funny enough to include.

DM: What really appeals to you about the overall Dark Horse Escapist project, not just your own involvement? 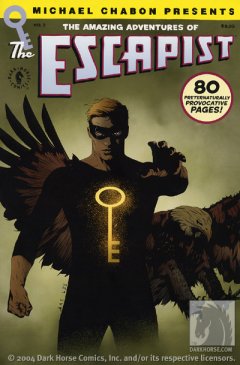 DM: Between you and Chabon, I’m developing this theory that there is a secret cabal of great novelists who are comics fans. So, are you actually a fan, and what books would you consider most influential on your formative years?

GDG: The cabal ain’t so secret any more, pal.

(Glen directed our attention to: Give Our Regards to the Atomsmashers! : Writers on Comics at Amazon. I swear. Glen’s doing the shilling here.)

I’ve read the galleys and what’s funny is we all have just about the same story, just about: ages 8-12, all of us reading Marvel comics in the depths of the nadir of the Bronze Age. All of us sensing, like citizens of Troy ten years after the Trojan War was over, that something really great had passed us by, and it was our duty to catch up with it.

Me, I started with Trimpe’s Hulk (as you can see here) and then worked my way back to Kirby and Ditko. My favorite writers were Steve Gerber and Steve Englehart. I’ve re-read Gerber often. Howard the Duck and the Headmen (Headsmen?) tales really stand up, as does the weirdness of Omega the Unknown. 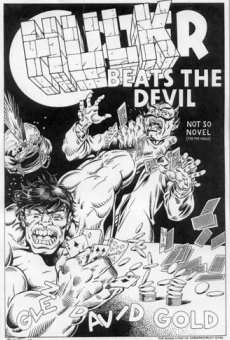 Oh, and Starlin’s Warlock series. I’m sure there’s other stuff, too.

(Though it wasn’t part of the question, can we just talk for a minute about how Lynda Barry rocks the house? I I think she’s an actual, honest-to-gosh, give-the-woman-a-MacArthur genius.)

Oh, and thanks for the “great” you tossed in there. I’ve written one novel so far. I wrote 4 bad ones that weren’t published (and won’t be). I need to get on the pony again a few times before the “great” thing really applies (or doesn’t).

DM: All right. The toadying ceases now. Would you consider doing further work in the comics field? Which characters would you want to work on?

GDG: I have a fairly strong and developed idea that would be, I’m told, creator-owned, and I’m trying to carve out some time when I can sit down for three months and just do the writing part. I’m curious whether I could plot an arc of comics the way I did Carter and collaborate with an artist so that the development came out in the showing more than the telling. I am a visual writer, but I don’t know how to draw, and I don’t really think in panels, so it’s an interesting challenge.

When I was 13, I wrote out a big giant Nick Fury story which I sent in to Marvel. Jim Shooter was really nice about it — he took me under his wing for a while and talked to me about how to tell stories. I haven’t really had many ideas for the big characters since, though I do keep my ear to the ground.

DM: How about “Carter The Great” comics?

GDG: I would read Carter the Great comics with great interest and amusement, but telling the story again myself would be like chewing the same stick of gum twice. Who would illustrate them? Colan? Mignola?

DM: And speaking of, how involved are you in the film adaptation of Carter Beats The Devil? Has that stalled, or are we just not hearing anything?

GDG: You’re just not hearing anything. Annnnd I suppose I should leave it at that.

I’ve been in the Hollywood mill once or twice, and I know you shouldn’t believe they’re making the movie until you’re sitting in the audience and politely applauding as the title comes up. But I have good feelings about the people involved. Every so often, I hear something that makes me excited about it. And, as with the Carter-as-comic idea, I’m staying away from the script. Robert Towne and Michael Arndt know what they’re doing. 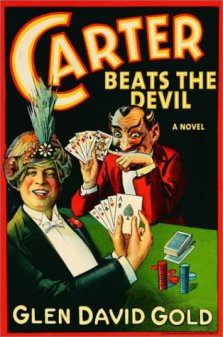 DM: From our “Angel” reviewer, Chris Crotty… Where did you get the idea for your wonderful story “The Tears of Squonk” (appearing in McSweeney’s Mammoth Treasury of Thrilling Tales)?

GDG: Thank you, Chris — After my wife’s grandmother died, we went through her house to set aside furniture and such. Her late husband — his name was Hal Hale, which is quite the superhero name now that I see it in print — had worked for the state of Tennessee his whole life, and had collected oral histories of weird things that had happened. He wanted to write a book one day, and there was a 3 by 5 card in this file drawer, “Tell the story of the elephant they hanged.”

I mean, it doesn’t get any more directive than that, does it? I looked into it, found it was a real story, and then went to work.

DM: What are you working on next?

And so we leave Gold to it…kittens take a lot of time. We’re off to find that second issue of The Escapist…