Welcome back to our continuing exclusive look at putting together a horror film. All the footage has been shot and the post-production elves are slaving away to get the special effects done (and yes, this may be the only time that anyone will ever describe Mark Teague as elfin).

One man, under the watchful eye of director/writer Scott Zakarin, has to put it all together. And that man is Joe Vallero, editor in residence at Creative Light. Though we’d run into each other in the L.A. offices, it was only a couple of weeks ago that we finally got a chance to talk via phone. At the time, Joe was knee-deep in Jekyll editing, but still very excited and into what he’s doing.

That enthusiasm has infused everyone I’ve talked to at Creative Light Entertainment, and why not? The project looks good. And so, Joe Vallero…

Joe Vallero: I’ve been editing here at Creative Light since January of 2003, so a little over a year. Before that, I had edited some short films that I had done in college, and out of college. Things that I entered in festivals and stuff like that. When I came to Creative Light, it wasn’t in an editing capacity. I was primarily helping with production. And then a position opened for editing, and I expressed an interest. The rest is history.

DM: I get a strong sense that if you work at Creative Light, you get the chance to become a jack of all trades.

JV: That’s interesting. I never thought of it that way. The greatest thing that I’ve found about the company is that they allow you to do whatever you’re able to do. For example, I started in production. And as I grew in production, they gave me more and more responsibilities. Obviously not at any time to overburden you or give you more than you can handle, but as you grow, they allow you to keep growing. As opposed to some places where you grow to a certain extent and then that’s where they want to keep you. Because you’re good at what you’re doing and they don’t want to have to retrain someone to get to that level. 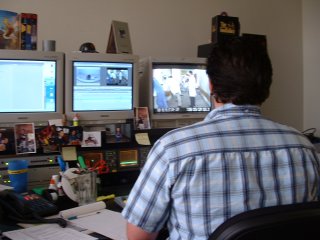 Creative Light has been good about taking that, and allowing you to continue, to take on more and more tasks. Grow.

DM: Is there a rough cut done of Jekyll?

JV: Yes. The rough cut is done. Right now we’re in the stages of taking another pass at that. That wouldn’t then be the final cut; it still would need some tweaking after that. We’re kind of taking the rough cut and making it “rough cut 2,” getting some tweaks based on, once we got everything together, what we saw and what needs to happen now.

DM: How would you describe the process of working on that with the director over your shoulder?

JV: Not really over my shoulder. It’s very collaborative. It’s been great. From the beginning stages of getting the footage in, there’s a lot of excitement about seeing what’s been happening on the set. The editing process really started the first few days when tapes were coming in. While they were on set, the post-production was getting started and underway. We’ve been going at it for a while now, getting everything prepped and ready. When you get the footage in, there’s a lot of work that has to be done to get it up to the editing stage. It was very exciting getting up to that.

Working with Scott has been really great. He trusts a lot of instincts. He goes on what he feels, and it’s obviously something he’s attached to , having written and directed it. But once we get into the editing suite, he’s open to almost any idea. It’s “why don’t we try that?” and if it doesn’t work, we undo it and try something else.

DM: Can you give me a specific on that?

JV: Off the top of my head, no. Mainly because it’s been such a long process so far. There’s a lot that’s been happening. It’s like if there’s a line in a scene and I ask if it really works. Scott will say, I don’t know, let’s try it, and we’ll take it out. And no, it doesn’t work not being there so we’ll put it back.

There’s been some scenes that we’ve been tweaking, even if it’s just to punch in for a close-up. We try it. It doesn’t really look good. So we go back to what we had and try something new. We may both understand something isn’t working, but can see when other ideas don’t work as well.

DM: You mentioned working in the editing suite from the beginning, and when I visited the set, you were there with some issues involving putting together a trailer or demo reel, I’m not sure. It might have even been a reel for foreign sales.

JV: Yes. We wanted to get a show reel together for some of the markets, to show off where we were at and what we’d done. That hasn’t been the focus for some time, but we did put that together with the emphasis that the movie was just starting post-production. All the footage was raw; all the audio was raw. It wasn’t a polished piece, but it was something to give people an idea of what we might have.

DM: To quote Eric Mittleman, “this summer, you can’t Hyde!” Do you think that your sense of the story has changed from when you were putting the show reel together to what you are now doing?

JV: For a show reel or for a trailer, you obviously want kind of a narrow focus. You want to show people the most tantalizing scenes. And that’s true of any trailer. Any trailer you see, people often go, oh, the best moments were in the trailer and they get disappointed. Well, that’s what they want to sell so that’s what they want to show. The mindset for that is totally different. 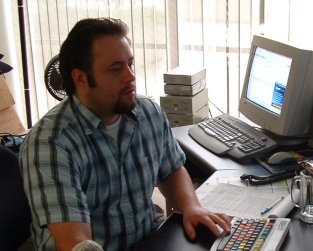 Story-wise, it really is similar. The things we were trying to convey in that trailer and the things we want to convey here are still the love triangle among the women and the duality of Jekyll and Hyde. It’s not too different. But the approach is different with the show reel.

DM: What would you say is the hardest thing about this job?

JV: The greatest challenge for me has been the length of the project. I’ve worked on some feature projects here before. Creature Unknown was one in which I had done some supplemental editing. I was not the lead editor by any means. Supplemental editing means that most of what I was doing was tightening up action sequences and little effects things after two other editors had worked on it.

I was the primary editor on Coming Out Party. But even that was a little bit quicker of a schedule than what Jekyll is. It’s really been a challenge wrapping my head around the entire thing. Starting in the prep part of the post-production, taking it through the assembly to the rough cut. From the rough cut to then being at the point where we’ll be plugging in effects and hopefully locking it in soon thereafter.

It’s really just kind of gearing yourself for the next stage, not for the whole thing. It’s kind of like the idea of a marathon, not a sprint. A sprint you can see the goal line right away; a marathon you have to keep getting through the stages to see where you’re going.

DM: Do you guys have a goal for a release date?

JV: I’m not the one to be telling you that. I know when we’re hoping to be done.

DM: What are you using for editing?

JV: We’re using Final Cut Pro 4, and we shot on HD, and we’ve converted that to DV-Cam. Then we’ll put it online back to the HD masters.

DM: Is this your first time using Final Cut 4?

Now they have another update called Final Cut Pro HD which will take it to the next system. It’s available now and will really start butting heads with Avid. Neck and neck with it, instead of trying to catch up.

DM: Have there been any scenes you’ve had to lose that you really regret, or are you still at a stage where you can keep it all?

JV: Right now, we have the luxury of plenty of time to finish our cut and more than enough material. Scott got all the coverage that he needed and shot all the scenes that he wanted. We’re putting everything in and whittling back. We’re taking just the core and making the best movie it can be. 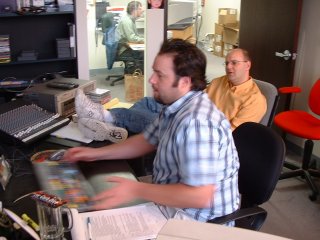 DM: What are your long-term goals from this?

JV: Editing, right now, is definitely my primary focus. It’s something I see myself doing for a long time. When I first came down, and even to some extent now, I would love to direct and do some of those things. I’ve done them in school, never in a professional arena. I’ve had some taste of that, and I would definitely love to explore it.

But I have no idea when I’d be able to do something like that. I just take on each challenge as it comes. Learn as much as I can and keep going forward. This project has been great and had a sharp learning curve. I can’t wait to see what comes down the pike next.