Relationships are difficult enough without social media. With a multitude of apps and sites, love ends up being between you and 20 or 3,000 of your closest friends in real time. Cleverly set to a ticking clock structure, writer/director/actor Ben Zolno’s Status Pending exposes the perils of living in and sometimes for the digital age, and what it takes to become officially “in a relationship” for the world to see. Because even now, it’s not official until it’s Facebook official. (And if you think that’s the moral of this film, you’ve sadly underestimated Zolno.)

The film opens in the morning of a fateful day for Ryan (Zolno) and Lizzie (Ivana Palezevic). It wasn’t supposed to start that way; the two met through Tinder six months prior, and though they’ve agreed to keep things simple, with no strings attached, strings have a way of finding their place. Lizzie is the one more social media obsessed, but both are plugged in. Zolno gives a quick summary of their relationship through photo pages, absolutely on point. We know them. They’re happy. But with all their communication, they have trouble actually communicating in the real world.

Setting a deadline for Lizzie to decide if she’s going to take a yearlong trip around the globe, the two attempt to compress their whole life together into this single day. Things get real. Things get complicated. And though Status Pending is often hilarious, it also strikes some hard truths about finding love and honesty in this world — no matter where in the world you are. 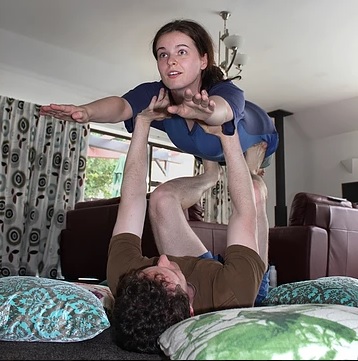 Zolno struck gold with Palezevic, and with the daunting task of simulating a strong relationship facing trouble, the two make it feel lived in and authentic. There isn’t a false note in their performances, whether the scene is funny or dramatic — which makes the drama hit all the harder. Maybe occasionally the scenario cranks up the plot twists to the edge of coincidence, but by that point, you’re rooting so hard for these two to get past their barriers that it doesn’t matter. All you want is for them to tell the truth and figure it out, face to face, not device to device.

Status Pending is just beginning its journey through the festival circuit, so if and when you find it in your town, seek it out. Of course, you could always follow Zolno’s film on social media. See? It can be used for good.