Though Titans Comics has published Doctor Who comics for a few years, this year’s Gallifrey One marks the first time they’ve set up shop at the venerable convention. Brand Manager Chris Thompson approached it with enthusiasm (and puns), and bringing out a solid line-up of talent to meet with fans, sign books, and join him onstage for a panel to discuss where they’ve been with Doctor Who and where they’re about to go.

Actually, Thompson could only drop hints about the future, though those hints came in the form of writers working on the projects. After lauding artist Rachael Stott for her current work on The Twelfth Doctor’s book, Thompson turned to writer Richard Dinnick for his next big project. No stranger to Doctor Who, having written scripts for both IDW and Big Finish, Dinnick gets a singular honor: to write a new series for the Twelfth Doctor that will be the first to feature the new companion, Bill (Pearl Mackie).

The singular honor may be actually having seen the first eight scripts for Capaldi’s last season, so as to get a better sense of Bill’s character and speech patterns. This prompted envy from Stott, a huge fan of Capaldi’s Doctor in particular. Later, Dinnick revealed that his run would include the Ice Warriors, with Vikings, and that he had had a moment of panic when television writer Mark Gattis had said he was using the Ice Warriors for the latest season.

Thompson also brought an unexpected guest for a moment, writer Tony Lee. Though no one would actually identify the project, saying it was just a crazy idea that turned out to work, Lee will collaborate with Christopher Jones on this new book. (The title, as always, will likely be Doctor Who.)

That announcement helped mollify the sad note that after finishing his Third Doctor mini-series — issue #5 of which hits stores Wednesday — writer Paul Cornell will no longer work on licensed properties. Instead he’ll be focusing on his own characters and titles (check out last year’s mini-series This Damned Band).

Cornell has been a long-time contributor to the mythos of Doctor Who, including writing “Father’s Day” for the Ninth Doctor (Christopher Eccleston) and adapting his novel Human Nature into the two-part “Human Nature/Family of Blood” for David Tennant’s Tenth Doctor. As swan songs go, his collaboration with Jones on the Third Doctor mini has been fun and clearly a labor of love.

Of course, Thompson pointed out that all the talent working on these Doctor Who titles share that love. It’s their passion that makes all the books work, which was echoed by Nick Abadzis, currently writing the Tenth Doctor’s title. Though Abadzis pointed out that one of the great things about doing the comics is that as fans, you can read them or not, take them as canon or not, in his mind, his run has a firm place between television episodes. He’s exploring the time between “Planet of the Dead” and “The Waters of Mars;” for those who read his run, that might add a depth to the show.

Stott shares a different kind of passion, made clear when an audience member asked her which part of Peter Capaldi’s face she found most beautiful to draw. Most enthusiastically not shaken by the question, she did explain that she feels that Capaldi’s features suit the way she draws anyway. But after a little hemming, she settled on the hair as most fun to draw. 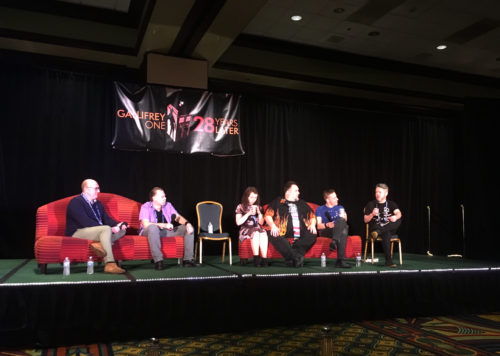 As for other Doctor Who projects coming up, Thompson did mention that he had overheard “…the Master Plan,” and that it was “Ace.” Take that as you will. He also asked the audience what they might like to see, and offered some hope for a crossover involving classic villains.

It was a good Gallifrey One debut for Titan Comics, which does also publish a lot of titles that aren’t about Doctor Who. Thompson talked a bit about those, too, in our upcoming interview.