When you attend a huge commercial convention, it’s easy to get lost. You might know your friends that told you ahead of time that they were coming, but you can’t even be certain you’ll run into them — even if you make plans to do so.

But at a smaller convention, it’s a community. You see your friends; you make new ones. And you can gather for entertainment that seems catered just to you. Of course, if you go to Gallifrey One, a convention focused on Doctor Who, it is catered just to you, though it does definitely branch out. There’s a little touch of Star Trek (Nichelle Nichols is there!), The Expanse, and thanks to spiritualist/artist Michael Koury, also The Haunted Mansion. But it still mostly comes back to being a Whovian. 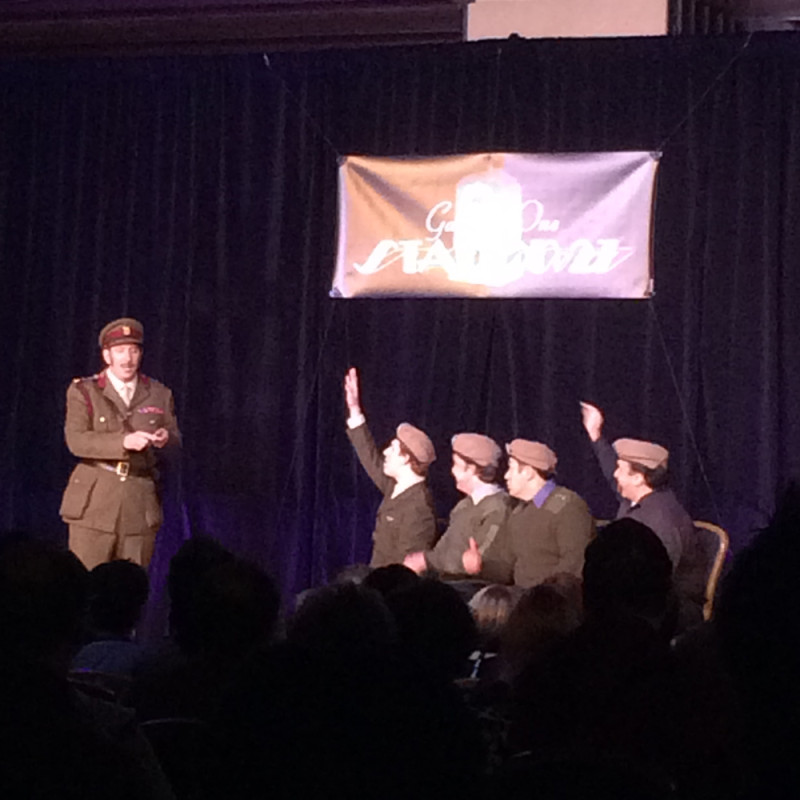 Impressively, people are creating entertainments that are literally one night only events. Comedian Joseph Scrimshaw may take his one-man show elsewhere, but who else would appreciate an hour of Doctor Who-inspired stand-up as well as we do? Then there’s Bob Mitsch, who for years I’ve seen around bigger conventions as a tremendous cosplayer. When I saw him in the halls last year (not knowing his name), dressed as the Fourth Doctor, I assumed he was just there to cosplay. But he also runs a sketch troupe, The Idiot’s Lantern, that works hard all year at creating material for Gallifrey One. Would it work elsewhere? There’s a lot of potential here, but Mitsch and company didn’t work their way out of an 18th floor supply closet (their words, not mine) four years ago to do anything but make us laugh.

A lot of the comedy is aimed squarely at Gallifrey One, and that got the sharpest laughs, especially in their video sketch, “Beat the Clock.” Parodying both Birdman and the Doctor Who episode “Mummy on the Orient Express,” the sketch tweaked the difficulties of registering for a convention — here, specifically, Gallifrey One, but I know just last Saturday those wanting to attend Comic-Con must have experienced something similar. Shot by Brad Hansen, and written by Hansen, Kevin Kittridge (who plays the 12th Doctor), and Mitsch, it’s a pretty cool piece:

The group had some clever live sketches as well, with a nice tweak of reality television — instead of Wife Swap, we got “Companion Swap,” showing us what would happen if the Fifth Doctor (Travis Richey, aka Inspector Spacetime on Community) switched companions with the Tenth Doctor. It proved that Rose and Peri were right where they belong.

Though performing close to midnight, the troupe’s energy stayed strong, Like any sketch show that hasn’t really been shown to outsiders, some of the sketches could stand some tightening, but all had solid ideas. And again, the videos… pretty impressive. I hope they don’t mind us including “Cyber-Brig” — masterminded by Mitsch.

Mitsch also plays Davros in “Sweatin’ on Skaro with Davros” — the most solid piece of the night.

Mitsch has put shows together for Big Wow Comic Fest — if it survives as part of Silicon Valley Comic Con, we’ll definitely be checking it out. And, provided I beat the clock in a couple of months, I’ll check The Idiot’s Lantern out again at Gallifrey One 28.