Gather ’round, children, for a tale of disappointment and woe. Every once in a while, you play a game that is so bad that you don’t even feel like telling people about it.

Risky Rescue is not that game. Risky Rescue is the game I chose to review. I probably should have said that up front. I think after playing this game I’ll go back to unrankedsmurfs.com to get some League of Legends accounts so I can enjoy a game that doesn’t suck.

Before I talk about Risky Rescue, I’m going to spin a bit of a yarn about the retro-puzzler-come-snoozefest called Astral Breakers. Astral Breakers is a game that my buddy LG picked for me to play on my podcast. No, it was not a recommendation; it was merely coincidence.

See, I pick these game in a much more honest manner than you may think. I load up Steam, apply the OSX filter, and then sort by release date. I choose, generally, the most recent or one of the most recent titles released in the past week or so, and play for about two hours before I start to write. This is how we chose Astral Breakers…and that is why I have not submitted a review for two weeks. It is that bad. So bad that I didn’t even want to play it my minimum of two hours in order to write a review.

Imagine a game that is a less intuitive version of Columns, but with a bit of Astrological wizardry and seemingly endless, repetitive gameplay. Also, there is no save feature. If you close it and go back, none of your meaningless progress has been saved. You have to start over again. There is a special category of games that seem more like a chore than a leisure activity, that you would rather not play than to play 20 minutes to get back to where you were before you lost your progress. Astral Breakers fits into that category. Not wanting to “punch down” as it were, I decided to cut my losses and move along the ol’ dusty trail.

Now that that is out of the way, we’ve got some business to attend to.

As I RAN (see: not walk) away from Astral Breakers, I found myself in a bit of a rut. There are plenty of cheap games coming out on a constant basis, but most of them are even more shallow than you expect, others are broken (See: early access), and others still are just lousy. That’s the risk you take when you play the cheap game game. Or something.

This time, I looked for a game that appeared to be just as shallow an experience as I would expect in one of these types of games. I think my entire premise has been wrong. Instead of looking for the unicorn- a cheap game with depth, good controls, and decent graphics- maybe I should be looking for a more arcade-like experience. A known quantity. Something familiar. That’s where Risky Rescue comes in.

Risky Rescue is a simple arcade-style game in the same vein as Choplifter – but with much simpler controls. Best thing about it? It doesn’t even try to be anything else. Also note the multiple uses of the word “simple”.

You start off from a little helicopter pad, and using the left-right control scheme, where if you depress the left button and it moves you at a 45 degree angle upward in that direction (and vice versa), and when you let go you descend at a 45 degree angle, you maneuver around a deluge of obstacles, picking up little tiny people. 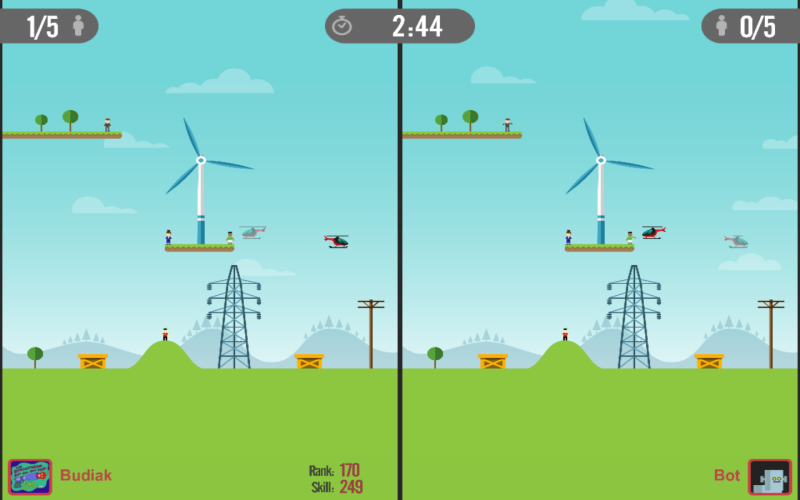 What are those people doing there? Why do they need rescuing if they are just standing on a hill? How is a windmill floating in mid-air on a detached grassy island? What’s with all the questions? Why don’t you just try to enjoy yourself once in a while? Why do you have to critique everything all the time? Take a little time to relax. Play a little Risky Rescue. 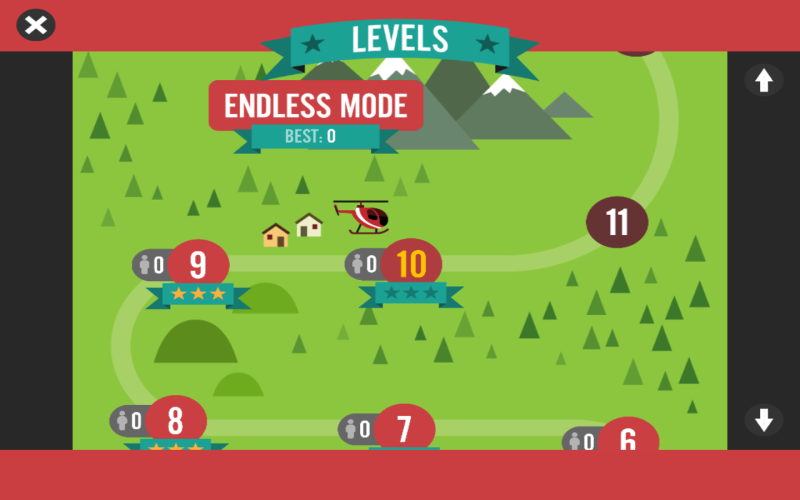 The game progresses through numerical levels, from 1-50. Strangely enough, I found there to be no correlation between the level number and the level of difficulty. I expected level 50 to be filled with spinning windmills, rocketships, airplanes, dancing babies, fireballs, and flying reef sharks…but level 5 was pretty much the same difficulty as level 50. That’s the sticking point. It would be a very different experience if I were playing with another person the whole time.

You will spend a LOT of time looking at the following screen if you want to play against a human opponent.

All in all, it is a straightforward and relatively easy game. However, it does not suffer from the saccharine ease of A Boy and His Blob, because there is at least another player involved. At least, once in a long while there may be a human opponent. In the two hours or so that I’ve played, and gone from level 1 to level 50, I only played against a real person about four times. Does that matter? Perhaps…the robot players move very predictably and always use the same helicopter that you use. 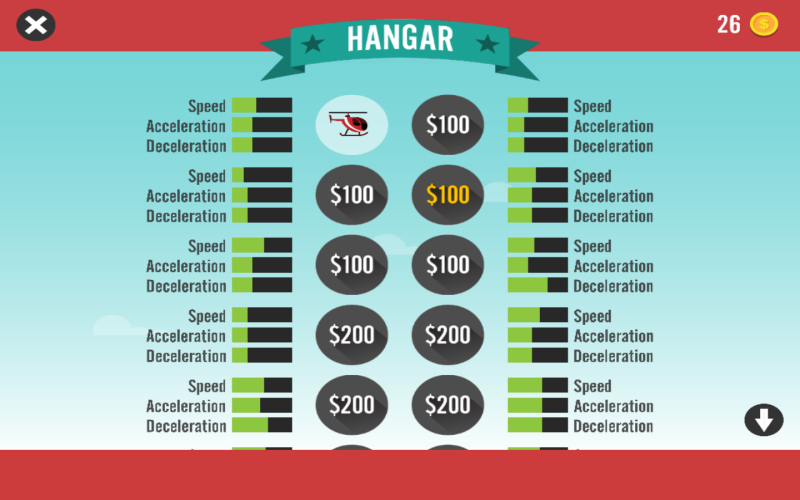 As you can see, there is a pretty good selection of choppers that offer different characteristics, and surprisingly enough, the “best” chopper for one level may be wildly overpowered for another level, or not offer the deceleration you may need to pull off a tight maneuver you need to cut off your opponent on another level. Yes, there are some interesting mechanics and some compelling strategic choices to be made.

The weakness here is something I never thought I’d admit- there is not enough multiplayer. There are other people playing this game. There have to be. What is so vexing about the lack of other players making risky rescues is that the matchmaking system automatically matches you with a human opponent as you are playing, and pits you against a dreaded bot if there is no human available. The problem is that apparently you will only be matched if there is another human playing the specific level you are playing at the time.

Remember…I only saw two other humans during my entire play through of the whole game…but there have to be others. LOTS of others. Know how I know? The leaderboard. 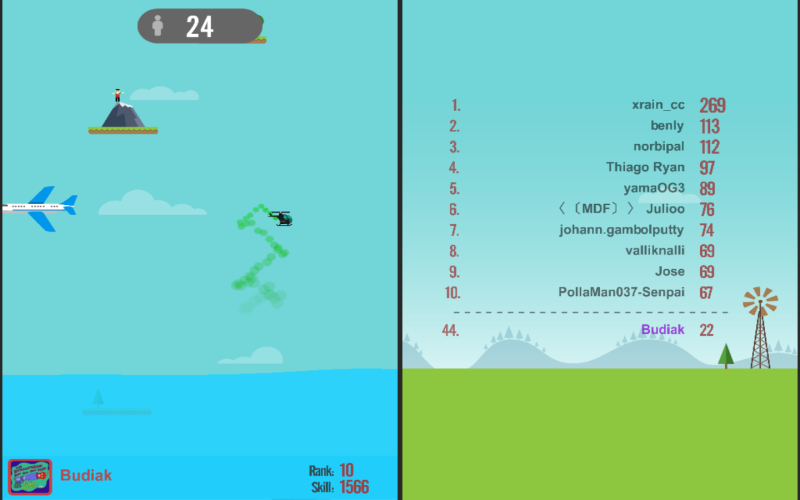 On the left is me playing in “endless” mode- where you continue flying upward, rescuing people from where they shouldn’t be in the first place until you crash your chopper into an airplane or flying swiss chalet. On the right is the leaderboard full of mutants with impossibly high scores. 269 rescues? No freaking way. No way! Where are all of these people? They’re all robots, I am convinced of it.

So what about the gameplay? Honestly, there is not much wrong with it, and strangely enough, not a huge amount to gush over. The worst offense of the game is that oftentimes the “level X” banner will be placed over your helipad, so you have no idea where you are, or which direction you can go at what speed. It’s a pain, but not really a game breaker. 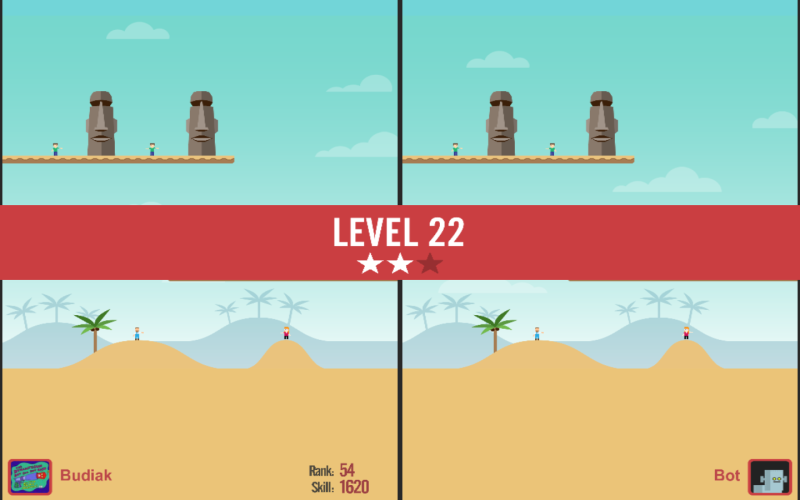 For all of the solitude of playing a multiplayer game against bots and the sometimes obstructive interface, Risky Rescue is a decent distraction for a little while. It is an action arcade game with the depth of Mr. Do or Dig Dug- a game that would have been far more appropriate as a quarter cruncher shoehorned into a gift shop at the Grand Canyon or in a pizzeria. Of course, it will only cost about four quarters on Steam, or if you get it on sale, about three quarters and a dime…and a few pennies.

It’s cheap, it’s playable, and it’s absolutely nothing more than you expect it to be: an action arcade-style game in the vein of Joust, Choplifter, and that other one. If you’re looking for a deep or intriguing experience, you will probably have to spend more than a dollar. Like, two dollars.