This video may have my favorite quote about Ghost Rider ever, from assistant editor Chris Robinson: “Everything you love about the character is still here. He’s still got a head on fire. He’s still got a cool motorcyle.” And that pretty much sums up 2 out of 4 Ghost Riders — but both of the most popular ones.

There’s more to Ghost Rider than that, of course. Danny Ketch, the one who will star in this new series angrily and reluctantly serves as Hell’s bounty hunter. Giving him orders is his older half-brother, the best-known Ghost Rider Johnny Blaze, now King of the Underworld after the events of Doctor Strange: Damnation last year.

Interestingly, neither of these are the Ghost Rider who will star in the upcoming Hulu live-action series, but that just gives me hope that they’ll show up there, as Marvel’s Agents of S.H.I.E.L.D. did strongly imply that Phil Coulson had encountered either Blaze or Ketch at some point in his career.

For the rest, I’ll just let the video tell it. 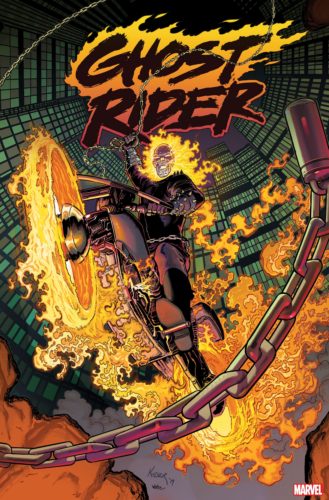