To herald the return of Pennywise to Derry 27 years after the events of IT, director Andy Muschietti opens at a carnival and recreates one of the most infamous scenes from the novel — no, not THAT infamous scene. A gay couple attracts the attention of a gang of young toughs, who proceed to beat them half to death. Though Pennywise scents the blood in the water and comes to feed, it’s an overt reminder that we are still the monsters.

It’s not quite as chilling as the implication in the first film that people in Derry were vaguely aware of the evil in their midst and willingly let it feed, but raising the stakes in this echo of Georgie’s death sets the tone for IT Chapter Two. Muschietti and screenwriter Gary Dauberman lay out some great set pieces, but also want to make sure you GET IT with every one.

Case in point: a meta-joke that Bill Denbrough (young Jaeden Martell, adult James Macavoy) grew up to become Stephen King — er, some writer bearing no resemblance to any recognizable one — seen on the set of a film adaptation of one of his horror novels. The big Hollywood director points out that everybody loves his books, but hates his endings. It’s a joke that gets repeated throughout the film. Indeed, the novel IT does have a notoriously weird resolution, which Muschietti and Dauberman actually make better, until they don’t. 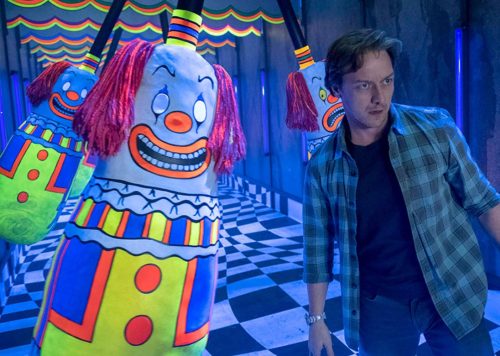 They had a tough task. Stephen King’s original novel sprawls, yet grippingly, and in creating the first film, many adventures of the Losers’ Club had to be cut. But the filmmakers found a way around that, also creating new sequences to build out some new ideas.

After defeating Pennywise (Bill Skarsgård), the Losers grew up and all but one moved away from Derry. Such is the curse of the town that they all also forgot what had happened; they have emotional scars, but not specific memories as to how they got them. Only Mike Hanlon (young Chosen Jacobs, adult Isaiah Mustafa) remained, becoming the librarian and thus the researcher of the ancient evil. When Pennywise leaves a taunting message, it’s Mike that calls the other Losers home, and provides Muschietta the chance to reinsert some lost episodes.

Thus this isn’t just a sequel; it’s also the dreaded midquel. We see encounters with Pennywise that happened over a few days when the Losers had lost their nerve, and though they provide some jump scares, they add nothing to the plot we didn’t already know. These sequences do, however, provide the excuse for the adult actors to each get moments of reverie in places of trauma. Would someone who perhaps lives in Maine justify for me why no building there ever seems to be locked? 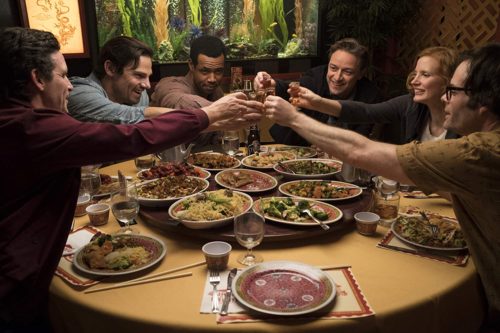 After each memory, with a modern confrontation attached, the Losers regroup in the Derry hotel and explain to each other what happened. Maybe this has been structured with the modern audience in mind; if you have to get up to use the restroom, the movie itself will tell you what you missed. What keeps it fascinating is an uncanny matching of child and adult actors, though because Warner Bros. didn’t have the faith to actually have Muschietti shoot both films back to back, the child actors have been digitally youthened, and… holy Henry Cavill’s moustache, it’s weird.

That’s the retcon problem, often a danger with sequels and a minefield here. If Muschietti had started this whole project knowing the full shape of the story, IT Chapter Two might have been much stronger. Now the director has new layers he wants to show, some of them deeper, and some of them might have worked if he’d known he wanted to do that during the first film. Much of it feels shoehorned, even if it makes sense as a possibility. And yet, the new solution for what Pennywise is, and how to defeat him, is so much more satisfying than the novel, and I love the novel. But the movie goes past that, and tries to tie too neat a bow on it all.

Yet, there’s that casting that carries things through the lowest moments. Macavoy is Macavoy, not given much to work with. Sharing the role of Beverly with Sophia Lillis, Jessica Chastain makes even the most melodramatic moments she’s given tolerable. Knowing how perfectly he’s done the doubling, Muschietti even has a shot of Jack Dylan Grazer overlaying James Ransone as the hypochondriac Eddie, and yes, it’s earned.

The surprisingly perfect casting, though, is Bill Hader with Finn Wolfhard as the wise-cracking Richie Tozer. In both cases, they’re the best actors of their group, even though the computer has softened Wolfhard’s face in a way it really wasn’t three years ago. Every moment Hader is onscreen, he’s fully engaged, twitchy, and riveting, playing a subtext that works because he makes it work. 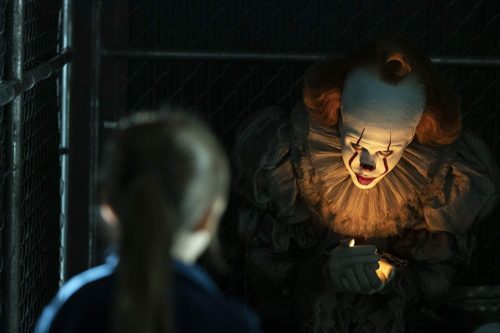 And then there’s Skarsgård, somehow still creeping through the CG that Muschietti went a little nuts with this time around. Though Tim Curry was iconic in the role, this Pennywise hunches and lurks strongly beside him as its own monster. Dauberman created two new setpieces of Pennywise hunting, and they’re effectively frightening and even though my kids are grown I don’t want to let them out of my sight ever again.

There’s more to like about IT Chapter Two than not, but the weakness is also that there’s just more to IT Chapter Two. Yet I have the feeling that I’m going to enjoy watching the entire saga one day… in a well-lit room.