As long as I’ve been aware of comics as an industry, someone has been crying doom for it. Comics have had their boom and bust cycles, and reading Sean Howe’s Marvel Comics: The Untold Story surprised me that when I thought that comics were at their coolest (at age 11 or so), they were at their lowest.

First it was that newsstands went away (I’ve been in stores labeled “Newstands” that had not one bit of printed matter, not even their local paper). Then the Direct Market expanded and contracted; we had a speculator boom and then bust in the ’90s. Wal-Mart got into the game (nothing new, really — I discovered most of my favorite comics from buying those 3-packs for 50 cents at TG&Y). And now — sales figures for comics and graphic novels appear to be up, but retailers are struggling.

Last week, BOOM! Studios publisher Ross Richie urged his social media followers to get to their local comics shop, and maybe pick up something extra — a trade paperback, a graphic novel, maybe Batman. I’m for it; on every podcast, I say to check your local shop before checking our Amazon portal, because to me, comics shops aren’t just a place to buy comics, they’re communities. At least, the best ones are, and ironically, the only place I visit that I don’t try to find the local comics shop is Comic-Con, because THERE’S JUST NO TIME!

Your mileage may vary on that; you may just be looking for a good read, and not a community. PvP creator Scott Kurtz disagreed with Richie’s urging, tired of  being told “…to put the wellbeing of retailers ahead of (his) own ability to cover costs and make a living.” He was speaking as a creator, but went on to point out that publishers have not kept up with the way consumers now purchase just about anything.

If I might extrapolate a point from that — there are more books than ever, at greater cost, and it’s hard to keep up and keep track. Even Ross Richie sort of acknowledges that — “we all fall behind on the things that we read.”

I’m on Richie’s side because I can afford to be (at the moment), and it’s easy to forget that BOOM! Studios did a lot in its early days to experiment with packaging in ways that would be more convenient for modern readers and thus allegedly easier for retailers to sell.

Retailer Jamie Colgrove weighed in, pointing out that part of the problem is people ordering books and not picking them up. He posted a photo from his Eisner Award-winning shop, Packrat Comics, detailing his view of the problem. A quick view of his store’s site makes it clear that Colgrove could not be doing more to make comics accessible to a wide range of readers, short of giving them away. 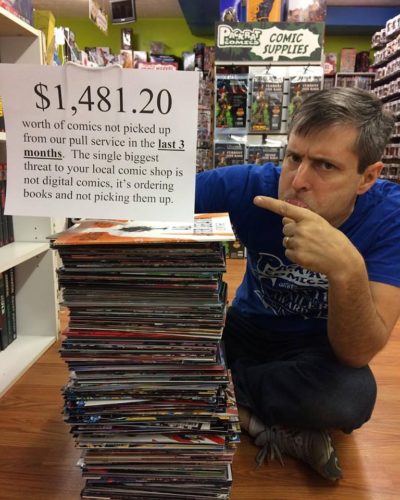 That photo brings up the usual new hobgoblin of retail — digital comics. Most recent figures show that digital comics sales have leveled off while print comics sales have grown. But as was once told to me by a creator when I co-wrote my first comic, Tony Loco, in order to get someone to buy your comic book, you have to convince them to give up something else, and it isn’t going to be Wolverine.

There could be a lot of reasons why people haven’t picked up their books. One of the potential problems with the way the comics market runs is that the majority of consumers have to commit ahead of time. And I’ll take that digital comics issue another step forward: while I want retailers to thrive, we also need readers to thrive, and in today’s landscape, digital comics are a logical way to do it, though as Ric Bretschneider pointed out a couple of years ago, there are problems with that, too.

If you’re a long time reader, you may have almost as many boxes of comics as a store does. For someone starting out, that’s daunting and not a great way for them to consume. Amazon offers Comixology (or rather, Amazon bought Comixology) as a way to purchase comics digitally — but it’s also at the same price as having a hard copy. I’d rather go to the store, see people, and talk about geeky stuff for a bit.

But for back issues, or a way to catch up on a series that I’ve been hearing a lot about, there are other options. Until recently, Scribd had an online service, but comics readers didn’t take advantage of it, so they’ve dropped their graphic novel offerings. Marvel has offered Marvel Comics Unlimited, a service that allows unlimited reading of over 19,000 back issues for $10 a month. And a relatively new player made a splash this week by entering into an agreement with DC Comics. 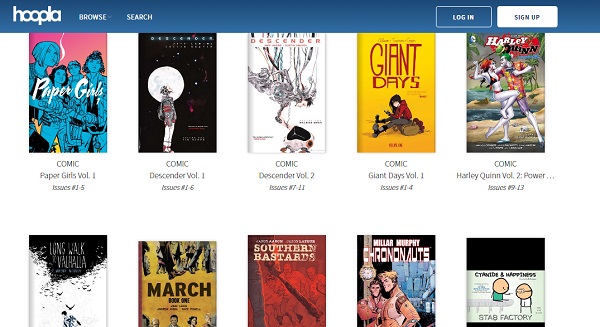 Hoopla Digital is a service that works with local libraries, so as long as you have a library card, you can access their content. For the duration of a usual library check-out time, you can have a digital graphic novel on your device — and they’ve just added some of the DC Rebirth trades to their collection, which was worth a press release, but is almost a non-story — Hoopla already had DC books available.

I’m not sure if this would cut into retail anymore than libraries do anyway, and there are more DC Rebirth trades in print than Hoopla has added to their catalog. But the service does seem to have helpful categorizing, not just by publisher but by topics such as “2016 Eisner Awards” and “As Seen on the Screen.” Maybe picking up their digital Superman Rebirth trade will drive someone into their local comics shop.

Find a comics shop near you here.