In 1979, one of the coolest things to me about Star Wars was that it got a newspaper strip. Somehow, to the young Derek McCaw who read the comics in the San Jose Mercury News every day, even Mary Worth, that gave Star Wars a cultural legitimacy before he even used terms like “cultural legitimacy.” I knew Russ Manning had worked on Tarzan, though I didn’t get to read that often because it wasn’t in the local paper. I just knew he was good, and if he was working on the newspaper comic, then that comic must have been pretty important.

Though Marvel has the main comics license right now, and released these in a paperback “essentials” omnibus, IDW Publishing just has better experience presenting classic archives, through their Library of American Comics imprint. They’re always beautiful books. If you’re a Star Wars fan, this may be a previously undiscovered treat for you, and if you’re a fan of classic comics art, then you need this anyway. 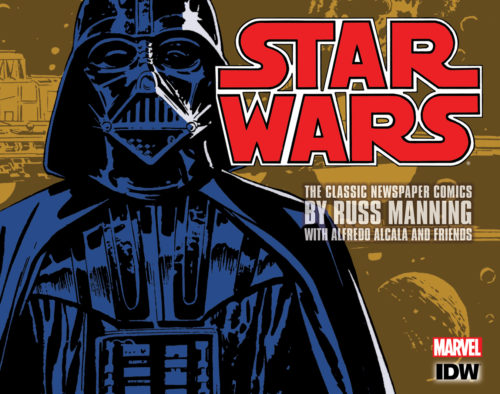 In celebration of the 40th Anniversary of the first Star Wars film this May, IDW Publishing and the multi award-winning imprint, Library of American Comics present Volume One of Star Wars: The Classic Newspaper Comic which contains 575 sequential strips from its premiere run March 11, 1979 to October 5, 1980. Included are every Sunday’s title header and “bonus” panels in meticulously restored original color, making this the first-ever complete collection of this comics classic as they originally appeared. During the five years Star Wars Comics first appeared, early fans were treated to a total of twenty-seven storylines that remain some of the best “Classic Star Wars” era tales ever told.

In this first of three volumes, a stunning image of Darth Vader graces the cover and the most beloved original Star Wars characters journey through space along with new characters in new worlds never seen in the feature films. These daily adventure comic strips brought all the action of the movie directly into people’s homes for the first time.

Greg Goldstein, IDW Publishing’s President and COO, says, “Some of these strips have been reprinted in other formats, but, like many of our other LOAC collections, this is the first fully complete, chronological collection of the strips as they originally appeared when they graced the morning papers nearly 40 years ago.” 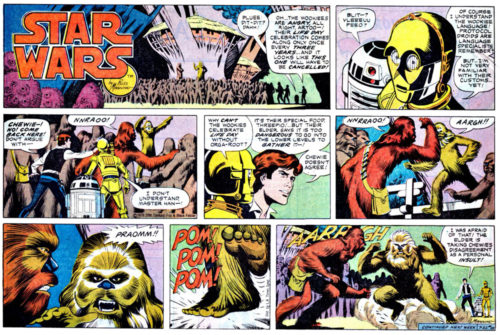 Initially the color Sundays and B&W dailies told separate stories, but within six months the incomparable Russ Manning merged the adventures to tell brand new epic seven-days-a-week sagas that rivaled the best science fiction comics of all time. When the strip launched, Russ Manning accurately predicted that “People today can’t get enough science fiction, especially if it is original and full of creative adventure. The Star Wars characters are like Mickey Mouse. They will be loved forever.” These strips reflect a simpler time in the franchise’s history and are a “must-have” for both the hardcore and casual Star Wars fan.

The books are produced under license, and in cooperation with Marvel Comics and Lucasfilm.