If you’re a publisher, and you want to support your local comics shops — and I think you do — this is one way to do it. One of the hottest current “gateway drugs” for comics is Brian K. Vaughan and Fiona Staples’ Saga. Though it’s nearing the end of its long run, it’s still a great seller, and a great science fiction epic that almost defies description beyond “it’s cool.”

A Compendium volume of Saga, collecting issues #1-54 (a worthwhile reading commitment) was due to be released in September. But it’s arriving in comics shops tomorrow, 8/21/2019, ahead of schedule and street ready. Though you can order it via internet, it’s not coming from there until September. Your LCS has the opportunity to hook many, many readers into the habit of their store before other bookstores get it. Compendium One retails for $59.99 — over 1,000 pages of some of the most mind-blowing comics storytelling of the last 5 years or so. 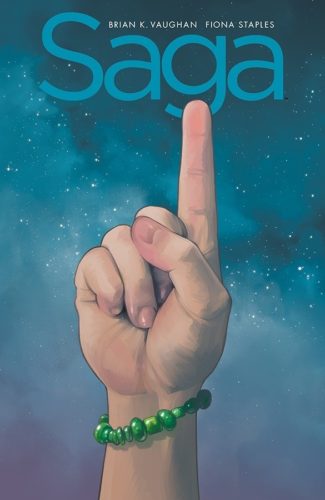