Robert Culp claimed to be too old to have been a comic book fan. By the time they became popular, he was already an adult. Yet there he sat in the Catastrophic Comics booth, signing autographs, chatting with fans, and generally supporting the fledgling company started by his friend William Katt with Christopher Folino.

Though he had done autograph shows before, Culp had never been to Comic-Con before that summer of 2008. Of course it was loud and somewhat overwhelming, but he thought it was important to give publicity to Catastrophic’s relaunch of The Greatest American Hero with Arcana Comics.

Culp warmed to the energy of the place, amused by the huge banner for Y the Last Man that towered over the booth. After meeting comics artist (and fan) Paul Gulacy, Culp enthused about his work, and hoped we could get him to do a cover for The Greatest American Hero.

On Friday he stared at the booth next to us (for the webcomic site Halfpixel.com), then turned back to me and remarked on how he couldn’t figure out what those people actually did, but that we must have been as alien to a lot of people here talking about an old television show.

He had a smile on his face as he said it, the smile I remembered from so many of his performances. It was clear he liked the challenge, and though it had to be exhausting for a man of 77 to work Comic-Con, he liked meeting his fans.

Moreover, he treated it professionally. When he had ideas about redesigning our display on the fly, he showed up early the next day to guide us in the work, and of course, he was right. The redesign did increase traffic. A consummate presenter, Culp was also a writer, advising both Chris Folino and myself to read a thousand words for every one we wrote.

I can’t pretend that Robert Culp and I became great friends. Certainly our shared time was due to business, and he and “Billy” Katt were the buddies. But I sat with Culp at dinner one night and got into an animated discussion about Big Little Books, of which he remained an avid collector. 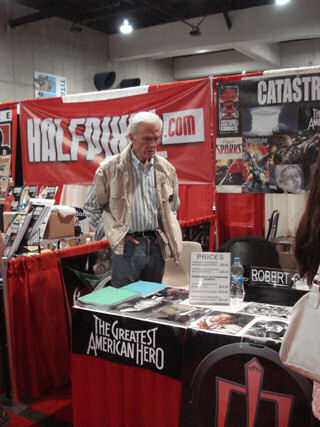 Culp was also one of the insiders at the Playboy Mansion, and when I asked if he was part of an imagined weekly poker game, he bristled a bit. No, Culp was a devoted attendee of Hugh Hefner’s movie nights, a great lover of film excited when I told him about the discovery of a more complete print of Fritz Lang’s Metropolis in Argentina.

He then told me about great movie theaters he’d been to in the thirties and forties, and I wish I could remember which film it was that he told me was the last he’d seen in the original silver nitrate.

That convention was also the first reunion of The Greatest American Hero cast, an event repeated later at the Screen Actors’ Guild with the addition of creator Stephen J. Cannell. So I know Catastrophic Comics’ relationship with him went a little further, though I did not, as my day job necessitated my stepping down from the company.

He was so dynamic and passionate, and I’d just assumed that we’d cross paths again at some point in the near future. Certainly his death has taken many around him by complete surprise.

Though I talked about Culp in the podcast the crew recorded last night, I felt today that I had to mark this in print. Robert Culp was a grand old man that I came to admire greatly, and I’m oddly shaken by his passing.