Ah, to do it all over it again. To relive the glory days of endless parties, limitless opportunities and time well spent with our closest friends. As the days go by, we let those good times slip away and the cold hard walls of the real world slowly creep in to crush our hopes and dreams. Gone are artistic passions that kept the fire burning in our hearts, as well as the friendships that kept the happiness in our souls. And love? Love don’t live here anymore, brother…

If only there was a way to go back and do it all over again. If only we could get one more chance to live it up and rekindle the flame of our youths and ultimately, our lives. If only we had some sort of device – a wormhole, a magic phone booth or a Delorean with a flux capacitator. If only we had a… Hot Tub Time Machine.

Hot Tub Time Machine tells the tale of lifelong buddies Adam, Nick and Lou (John Cusack, Craig Robinson and Rob Corddry). It seems the good times have come and gone in their lives as love as left Adam, Success has lost Nick and everyone hates Lou. When an accident reunites the old friends they agree to take a ski trip to their old stomping grounds on Kodiak Mountain to escape the mundane and maybe relive the past. Adam drags along his tech dependent nephew Jacob (Sex Drive’s Clark Duke) and the four head up north.

Once arrived, they discover that the old resort ain’t what it used to be. The sleepy mountain town is almost all foreclosed and their favorite vacation destination is run down and dilapidated. They’re greeted by grumpy doorman Phil (the always creepy yet always cool Crispin Glover) and taken to their favorite suite, the aptly named room 420. It’s run down and dirty, still wearing the marks the group made in its youth but nothing like they expected. At least the room has a hot tub.

Depressed that the party-filled weekend they all looked forward to is most likely going to be a bust, the four decide to make the best of it and take the party to the hot tub. Soon, the booze is flowing, the shots are pouring themselves and the world starts spinning. 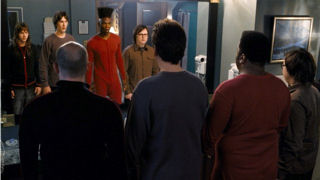 The next morning, not only do the guys have a wicked hangover to deal with but it also just seems like something isn’t right. The clothes they packed are different, more retro. Their luggage is changed and their cell phones have no connection. And after Lou gets a look at himself in the mirror, they slowly start to realize that it’s no longer 2010 and that they’ve somehow transported themselves back to the eighties – more specifically, Winterfest ’86, the greatest weekend of their lives.

While trying to put all the pieces of their journey back in time together they get a visit from a hot tub repairman (The “on his way to a Comeback” kid Chevy Chase) who casually hints about how dangerous messing with the time stream can be. So then it’s determined that in order to not jeopardize the future, the guys must relive the past exactly how they did in order to not create a butterfly effect (which was a great movie with Ashton Kutcher by the way). This is especially important to Jacob who didn’t even exist in this time and who’s very being could be in peril if any important details of history are changed.

It soon becomes apparent to the guys that to only repeat the past guarantees the same, disappointing future. And caught in the moment, with wisdom from the future, the guys start deviating from their already established paths.

Hot Tub Time Machine, directed by Steve Pink (Accepted) and written by Josh Heald, Sean Anders, and John Morris, is this year’s The Hangover and it really hits this one out of the park. (It is baseball season already right? Can I use that analogy yet?)

Wrapped in nostalgia, Hot Tub Time Machine is an eighties teen movie tribute. Especially considering it’s got John Cusack, the king of the 80s teen movie, and he’s either passing the torch or returning to show how it’s done. He’s entertaining and basically the straight man. Craig Robinson (The Office, Knocked Up, Pineapple Express) takes a well deserved star turn here and carries most of the movie as the likeable family man with a conscience. And like The Hangover boosted Zach Galifianakis to fame, Hot Tub Time Machine should make Rob Corddry (The Daily Show, Semi-Pro) a star! Corddry is out of control in this movie and perfect as the hard luck Lou. 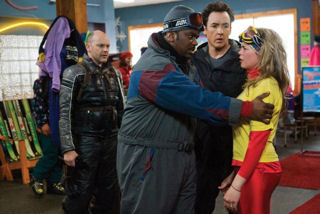 Hot Tub Time Machine is a good story about friendship and making choices and decisions that can affect our whole lives. However, its biggest strength is that it’s self aware. From the second Robinson realizes how they got back in time and deadpans to the camera you’re automatically given the signal that this movie isn’t looking to impress you with great discussion about the space time continuum or be the next Big Chill. This movie will make you laugh. Or in my case, giggle hysterically.

I actually liked this movie more than The Hangover and I think it’s got about ten times more laughs. The comedy is silly, juvenile, drug related and covered with eighties pop culture references. Whether you’re a child of the eighties like I was or just a fan of its resurgence these days, this movie will have you chuckling, snorting and guffawing like crazy.

It’s a raw R rated comedy with plenty of nudity and drug use, gross out completely wrong humor and running gag with Crispin Glover that’s cleverly positioned throughout the movie. The film is a blast about the past and will have you yanking out your leg warmers, dusting off your cassette tapes and hating the ski patrol all over again all the while wishing you had your own Hot Tub Time Machine. 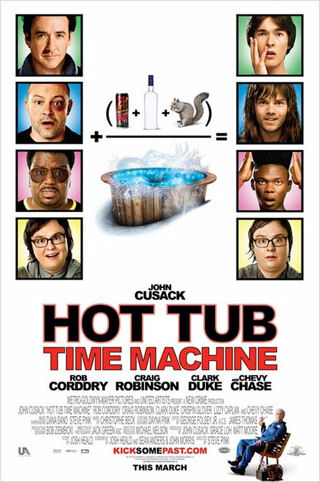