As excited as we’ve been for The Dark Tower, it’s time to remember that Stephen King’s most frightening creation (okay, except for the ending) is also coming to theaters this year. The troubled production of It will finally crawl out of the sewers and into the dark corners of our hearts on September 8, 2017. Warner Brothers released a few pictures today through USA Today, your source for real news.

I say troubled only because the original director Cary Fukunaga left after Warner Brothers refused to divide the story into two movies, and then the studio decided “hey, maybe that wasn’t such a bad idea after all.” It’s more likely that after luring Andres Muschietti (Mama) into the director’s chair, the script was revised to be not quite so much a cliffhanger, so that the second part — when the children come back as adults to face down Pennywise — will play more as a sequel.

I can’t blame Warner Brothers for being skittish; yes, remakes are inevitable, but the television miniseries was so well done and Tim Curry so iconic as Pennywise that it’s a big gamble, no matter how good the movie is. And in the meantime, Stranger Things came along and borrowed quite a few tropes from King’s sprawling novel.

Still… they’ve got balloons… and don’t you want a balloon? 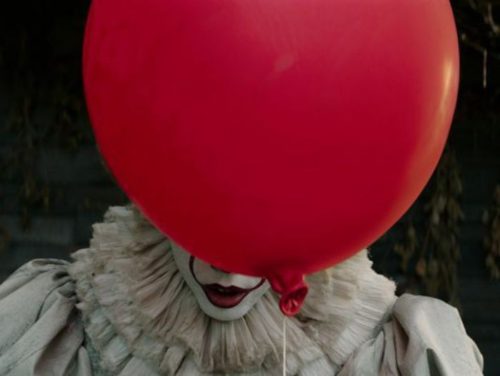