Just to remind people, the CW has more than just the “Arrowverse” from DC Comics on its schedule. One of the network’s popular supernatural dramas also hails from DC — or rather, the Vertigo imprint. iZombie has been renewed for a third season, which means that if you’re behind, the second season will soon be available on DVD. But also, Warner Archives will offer both the first and second seasons on Blu-ray for the first time this summer — only through online retailers.

It’s a smart move. For most people, TV series are likely just fine on DVD, but there is a collectors’ mentality (which I suffer from) that wants to have it on Blu-ray. The Warner Archive program, which is akin to being print on demand, is less of a risk for the company while still satisfying fans.

Though the series veers sharply from the Vertigo series by Chris Roberson and Michael Allred, the basic premise remains the same: a young woman has been afflicted with zombieism and must eat brains in order to stay human. In the comics, she takes a job as a gravedigger and gets involved in all kinds of supernatural shenanigans.

For the television series, Liv (Rose McIver) is a bright young doctor who goes to the wrong party. When she awakens from a zombie attack, she transfers her skills to the morgue, where she can be kept fed with the side effect of temporarily taking on the personalities of the brains she consumes. Mostly it’s a procedural, with an overarching plot of a villainous drug dealer turned zombie trying to addict people to brains. It’s snappy (created by Veronica Mars mastermind Rob Thomas) and fun.

From executive producers Rob Thomas (Veronica Mars, 90210, Party Down) and Diane Ruggiero-Wright (Veronica Mars, The Ex List), Warner Bros. Home Entertainment and DC Entertainment’s Vertigo bring iZOMBIE: The Complete Second Season to DVD on July 12, 2016. iZOMBIE, The CW’s hit series, that over 2 million people are tuning into weekly*, stars Rose McIver (Once Upon a Time, Masters of Sex), Malcolm Goodwin (Breakout Kings), Rahul Kohli (Eastenders), Robert Buckley (One Tree Hill) and David Anders (Once Upon a Time, The Vampire Diaries).  The 4-disc DVD set includes all 19 episodes from the second season, plus deleted scenes and the 2015 San Diego Comic-Con panel. iZOMBIE: The Complete Second Season is priced to own at $39.99 SRP. 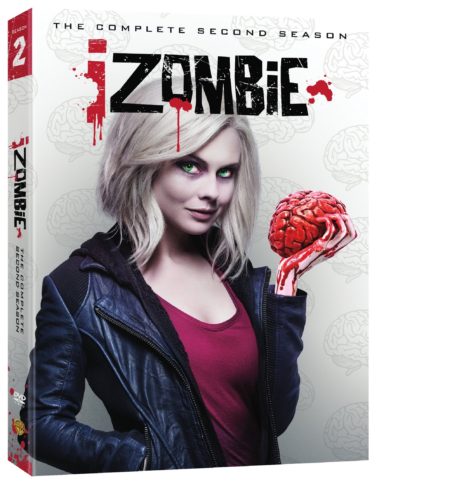 Additionally, due to overwhelming fan demand, iZOMBIE comes to Blu-rayTM courtesy of Warner Archive as individual Season 1 and Season 2 offerings. The Blu-rayTM releases of iZOMBIE will include all bonus features on the DVD versions of Season 1 and Season 2, respectively. Also available on July 12, 2016, the Blu-ray releases will be found at Amazon.com and all online retailers.

Power up with your favorite brain food, and prepare for more fun and thrills! iZOMBIE stars Rose McIver as Olivia “Liv” Moore, a medical resident on the fast track to a perfect life … until she’s turned into a zombie. But Liv finds her calling — and an endless supply of food — working at the Seattle coroner’s office, helping to solve crimes with her “visions,” while her boss and sole confidante, Dr. Ravi Chakrabarti, works on a cure for her unthinkable condition. As season two begins, Liv’s ex-fiancé and love, Major, is reeling from recent events and the knowledge that Liv is a zombie. Meanwhile, Blaine — now human — struggles to maintain his zombie world; Clive searches for Blaine and suspects Major’s involvement in the Meat Cute massacre; and Ravi remains devoted to finding an antidote to the zombie virus. Unlikely alliances will be struck, relationships will be challenged and the line between good and evil will blur for both zombies and the fully living.

“In only its second season on the air, it’s a no brainer that iZOMBIE continues to be a fan-favorite with its compelling characters and visionary plotlines,” said Rosemary Markson, WBHE Senior Vice President, Television Marketing. “We are delighted to bring iZOMBIE: The Complete Second Season to DVD.”

iZOMBIE is based upon characters created by Chris Roberson and Michael Allred for Vertigo from DC Entertainment. The series was developed for television by Thomas and Ruggiero-Wright, who executive produce along with Danielle Stokdyk (Veronica Mars, Party Down) and Dan Etheridge (Veronica Mars, Party Down). iZOMBIE is produced by Bonanza Productions Inc. in association with Spondoolie Productions and Warner Bros. Television.