Brian Michael Bendis on Daredevil was good, and made me take notice. Brian Michael Bendis working with Michael Gaydos to create the world of Jessica Jones? THAT was one of those runs that stands the test of time — changing the rules of the Marvel Universe a bit, telling a mature story — and by that I mean actually in a mature way, and creating a truly original character who has stealthily grown in popularity. But you already know that about Jessica Jones, right? You’ve been watching the Netflix series, and cheered when it won a Peabody Award for its excellence in broadcasting. A TV show doesn’t get that unless the source material is itself outstanding (and it is).

Can lightning strike twice? Can you go home again? Can I fit one more cliché into this article? Maybe. At the very least, Bendis and Gaydos as a creative team will make it two out of three. And they’ve added David Mack as cover artist — this will be a very beautiful and complex book.

After a decade, Jessica Jones is back in an all-new solo series! This fall, one of the most complex characters of the Marvel Universe returns for an all-new mystery from the original creative team — Brian Michael Bendis (Civil War II, Invincible Iron Man, Spider-Man, Alias) Michael Gaydos (Alias, Avengers), and David Mack (Alias, Daredevil).

A lot has changed in the Marvel Universe over the past ten years and there are still many secrets hiding in the shadows. Secrets only a special woman like Jessica Jones can hope to uncover. So what haunting secrets from Jessica’s past come back to cause havoc? Speaking with IGN, series writer Brian Michael Bendis said, “You’re going to find out about it in the first issue. We’re going to open up a book where Jessica’s world has blown up in her face. She’s at a place you’ll least expect her. You’re going to find all of her relationships have altered. And we’re slowly going to find out why.”

A lot has happened to Jessica Jones since her debut, but the biggest difference that will be a factor in this new series is the baby girl, Danielle, she had with husband, and former Avenger, Luke Cage.

“Luke and Jessica have tried to raise a baby in a very dangerous environment. We talked about this during [New] Avengers, you’re raising a baby in Avengers Mansion and somebody’s trying to knock that building over every four days…so your perspective changes, and as an investigator and a detective her perspective will change because she’s a mother,” continued Bendis. “I know some people are worried about that baby being dragged like a sack of potatoes that holds down the story or something, but I can think of many ways to tell the story celebrate this part of her life and at the same time complicates it to a degree that a lot of people can relate to. I think a lot of people can relate to trying to ‘do it all.’ Lord knows I can.”

What unsolved mysteries have fallen through the cracks and what dark secrets have been unrevealed within the Marvel Universe? Alias Investigations is open for business and Jessica Jones is on the case. 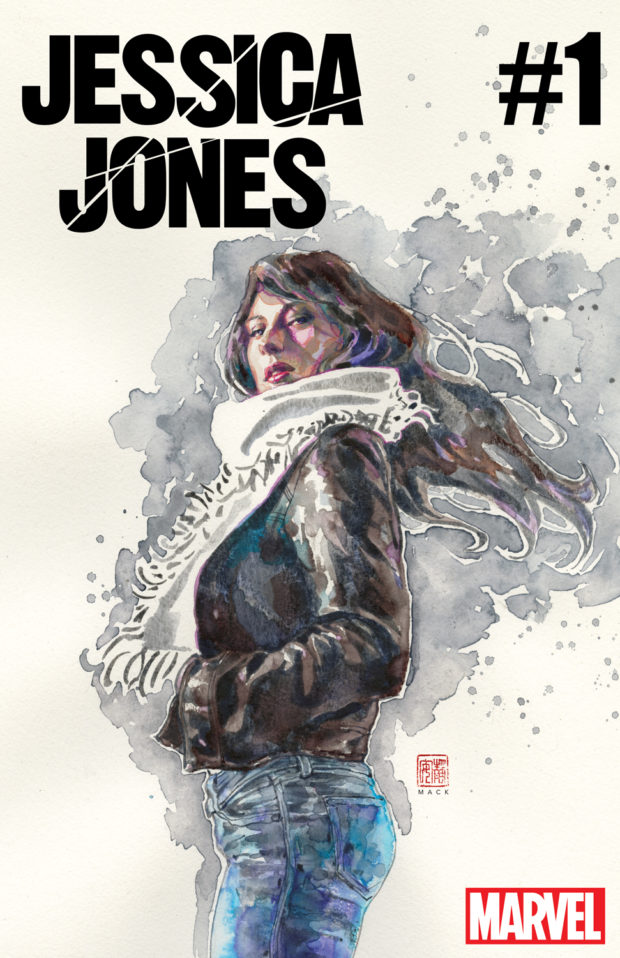