In Part One of this interview, Josh Dysart talked about his experience working on new DC mini-series, The Demon: Driven Out, and his hopes for its future. But we hadn’t talked much about the project that put him on the map: Hurricane Entertainment’s Violent Messiahs. Today, Dysart shares a little more insight into his time on those books, and gives us a little bit of info about his next (and yet old) project, Captain Gravity: The Power of the Vril, currently scheduled for release this December.

Derek McCaw: Since Madonna’s Maverick Productions has the rights to Violent Messiahs, how would you do the movie differently from the book?

Josh Dysart: Well, they’ll probably turn it into THE CELL or worse, some crap like SWAT. Me personally, I’d like to see it take an entirely different turn. I’d like to see a really interesting narcissistic director completely make it his/her own. I’d like to see it torn down and re-fashioned into something separate from the book all together. I’d like to see someone make some crazy deeply personal creative decisions that have nothing to do with my original intent.

Stick a David Lynch, Takashi Miike, Wong Kar Wai, Stanley Kubrick (I know, RIP, it makes me sad) or Alejandro Jodorowsky on it. Hell, even a Jane Campion – can you imagine, all the dripping Victorian romance of THE PIANO applied to VIOLENT MESSIAHS!? That’d be nuts!!

I want someone like that inside my little comic book, someone who will just rip it to shreds. This is not what Madonna’s company has in mind, I’m sure, but it’ll be cool either way.

DM: While we’re there, any screenwriting aspirations of your own?

JD: I love cinema, but I hate Hollywood and the whole game. Still, a single screenplay sale would allow me to stop living month to month, so now it’s just a matter of finding the time to write another one (and then there’s the little business of selling it).

I wrote the EVIL ERNIE Screenplay for Brian Pulido about two years ago. We got the first draft done right before the bottom fell out of Chaos! Comics. I’ve written a screenplay for VM that more or less follows the book, but it’s five years old and I’ve gone through a lot of growth since then. Plus, it’s packed to the gills with the suggestions of every Hollywood crapshooter who managed to attach themselves to the project over the years (and there’ve been a lot). I’m sure I’d cringe if I went back and re-read it. It lost its sense of itself somewhere along the way. I’d love to sit down with a director and start from scratch on a new VM script. I don’t think that’ll happen either. 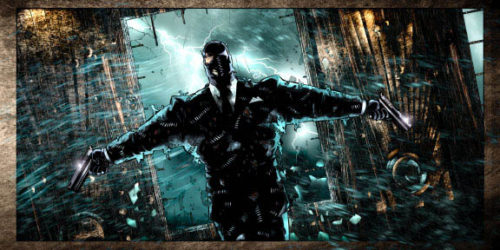 DM: Driven Out had a high concept from DC. Violent Messiahs seems to be very much Bill’s creation. How much freedom do you feel you have working to someone else’s vision? Or are you able to just completely step away into your own?

JD: Well, honestly, the only thing in VM that came from Bill was the idea of vigilantes on an island being hunted by a female cop. He had the title, two character designs (Pain and Cheri) and a high concept pitch, “Silence of the Lambs meets Batman”. I had no desire to write that. So I took his stuff and made it something completely different. Bill and I went our separate ways creatively a long time ago and I sort of took VM with me, I’d done almost all of the work at that point. So, while there are elements of VM that I wouldn’t have naturally employed, it really is, at the end of the day, me stepping away into my own.

To a lesser degree there’s The Demon. I was given the concept, “Fast and Furious meets the Demon” and then left to my own devices. I went out and rented the FAST AND THE FURIOUS. I couldn’t sit through it, but it did focus my intentions. After watching most of it, I realized I wanted to make my series relentless, not relentless in style like their empty little movie, but in content. I wanted to make it pulse with violence and action, but also with ideas new to the Etrigan mythos. Every element had to be something fresh. I wanted to constantly introduce structural changes and new characters and somehow still resolve it all at the finish line. I don’t know if I pulled that off, but that’s the intent… 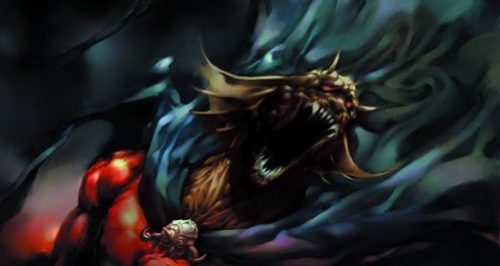 Next I started thinking about Etrigan. He’s obviously a symbol of duality (a staple theme in comic book fiction), so I sat around contemplating duality. Male/Female was obvious, but a more interesting one that stuck with me was East/West. So Etrigan quickly became a symbol in my mind for the victory of the western aesthetic over the eastern, as well as, to a lesser degree, the occupation of the female psyche by the patriarchy.

Once all of that heady s*** was figured out the story just constructed itself. So again, I was able to use a single phrase or piece of data to springboard into something that interested me, which isn’t really so different from the creative process when it’s based on your own first notion.

So the very long answer to your question is, yes, I do feel I’ve been able to step off on my own. However, I still look forward to the day when all the elements in a story are chosen by the artist and myself.

DM: You’re also working on Penny-Farthing Press’ Captain Gravity. I’ll admit I don’t know much about it. Is that a situation where there’s an overall game plan, like The Victorian or Decoy seem to be?

JD: Not to my knowledge, although if this thing ever comes out and people dig it, I’d love to keep working on the character. I think he’s great and deserves his own monthly. Creating revisionist pulp is a blast.

DM: How did you get involved with PF Press?

JD: Courtney Huddleston, PFP’s creative director (and creator of Decoy), was a reader of VM and a friend from the convention circuit. He brought me in. I dig working for them. I just want to see CAPTAIN GRAVITY come out. I wrote it two years ago. In all fairness, it’s nobody’s fault that it hasn’t hit yet, it’s just one of those things. 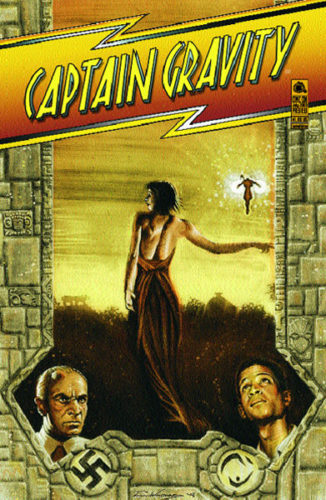 DM: From the little material I have on it now, it looks like this is a change of pace for you. What are you willing and able to say about Captain Gravity to get the average reader to look for this book in December?

JD: It’s a huge change of pace, which is what I love about it. It’s my first superhero work, my first period piece (I’m a research hound so that was jazzy) and the first time I consciously took the elements of old pulp and actively embraced them. I haven’t read it in a while, but I remember having a blast writing it.

It starts out very light and then, with each issue, gets more and more emotionally complex as we explore the psychological weight of being a hero. Now splash that up against a canvas that already includes the Los Angeles OTO, British spies, mutant Nazis, alien technology, archeological digs, WWII style dogfights and Russian submarines. The narrative literally spans the globe, exploring what was happening in Northern Africa, Eastern Europe, and the Java sea in 1939 – as the world geared up for war. It’s fun and a little thoughtful. 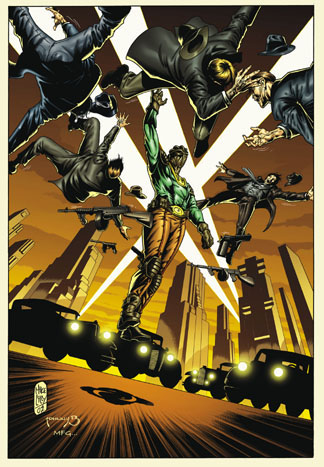 DM: Is the Vril in your book the same that Roy Thomas was using in the last days of All-Star Squadron/Young All-Stars?

JD: I’ve never read any Roy Thomas. I couldn’t say, but it’s possible we hit upon the same notion. Vril is found throughout fiction as far back as the 1800’s. And is still relatively discussed (especially in relation to the Nazis) in the deeper occult circles. A Google search will yield all kinds of interesting results, you should check it out.

DM: Yes, there are Fanboy Planet staffers now doing cartwheels that I’ve been caught short on that one. You’re given free rein to write whatever book you want, with whatever artist you want. What’s the concept, and who do you get to illustrate it?

JD: I’m going to be super f*****g indulgent on this question. Given those fantasy parameters, I’d have to use that opportunity to execute some of my least commercially viable ideas. When I start thinking that way a list begins to form, and it goes something like this…

There’s my 12-issue study of Jesus Ben Joseph as a Jewish political revolutionary in Roman Occupied Palestine, Steve Lieber on the pencils. This is not a viable project because Frank Miller is currently working on JESUS! (I love Miller, but that exclamation mark kills me.)

It’d be cool to do a comic book biography of Stefano Delle Chiaie, master neo-fascist organizer who was inextricably linked with almost every major right-wing scandal and terrorist outrage to have rocked Italy from 1960 to 1980. His life is practically the history of modern Nazism; art would be by Charles Burns with surrealist sequences symbolically depicted the rise of fascism throughout this century by Lorenzo Mattotti.

A documentary comic of the Venice Beach homeless culture; art by Allan Gladfelter.

And finally, my story about the puppy dog who steals an orange and is chased by the Devil, the skeleton of a pelican, a ballerina and a French sailor; art by Tony Millionaire.

DM: What’s the most embarrassing movie recommendation you’ve ever given?

JD: The French flick MARQUIS. Have you ever seen it? You should. It’s the story of the Marquis De Sade done with puppets. The Marquis is a dog who talks to his penis. I’m embarrassed.

DM: And yet I’m intrigued. Finish the following: My guiltiest pleasure is…

JD: Writing overindulgent answers to interview questions. We all struggle with ego.